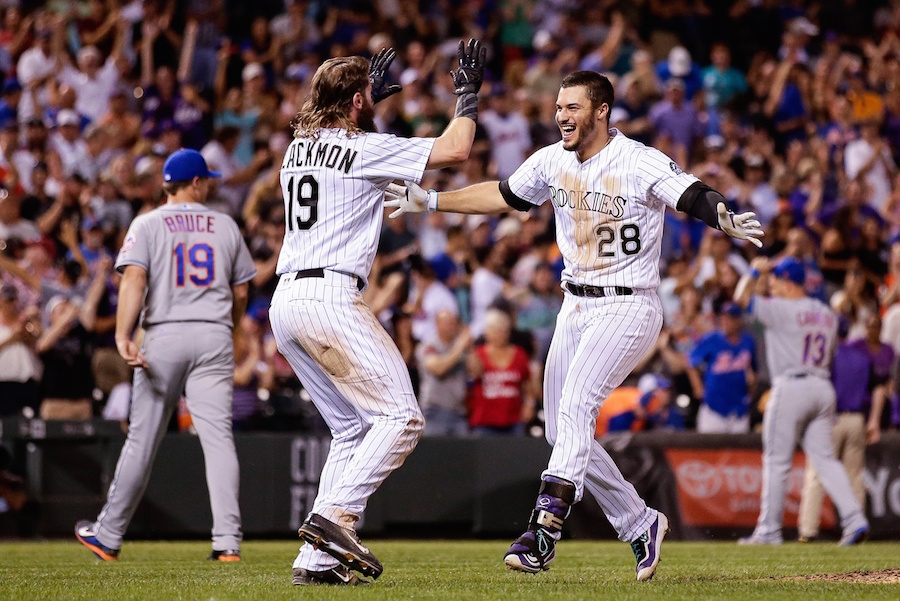 The Major League Baseball community is never going to legitimize the Colorado Rockies. It’s time to admit. Despite the ending of their most-fun season from start to finish, the Rockies still found themselves out of any conversation once they were eliminated from the playoffs.

No major accolades for Charlie Blackmon’s historic leadoff performance. No mention of German Marquez and Kyle Freeland’s scores in the prized WAR (wins above replacement) category when it came to Rookie of the Year voting. No acknowledgment that Nolan Arenado was equal to any player in baseball. Gold Gloves are participation trophies for his defense.

Silence — other than a couple of snide remarks about Coors Field being a hitter-friendly park as a historic number of home runs slipped over the fences in the playoffs.

The whole thing exasperates me. In a sport plagued by steroids, drugs, spitballs, juiced balls, corked bats and stats separated by segregation, it’s hard to believe that a harmless ballpark could taint baseball so profusely.

I’m tired of the lazy narratives about Coors Field. How can the positive effects of altitude at home not be a disadvantage on the road? If you’re going to penalize hitters for playing at Coors Field, then how can you not elevate pitching feats? When you’re given stats adjusted for each park, how can you continue to ignorantly spout untruths about the Denver? How can Coors Field be the only park held up to scrutiny when pitchers’ parks yield Cy Young winners and hitters’ parks MVPs?

Rockies fans need to change our strategy. We’ve seen the team try everything to get some respect. If a humidor, a Bridich Barrier and a big outfield won’t change people’s minds, nothing will.

If baseball people are too sheltered in their narrow-minded opinions to realize that Coors Field is a part of baseball and not a stain on its legacy, maybe it’s time to embrace that.

The Rockies are making some renovations to the ballpark this offseason; maybe a new sign is in order. Welcome to Coors Field: 5,280 Feet of Altitude with a Vengeful Attitude.

Philadelphia is known for booing Santa Claus. Buffalo is known for poor decision-making. Oakland is known for costume makeup. Colorado should embrace being known for ruining baseball.

Maybe we start game starts with a wave. We call it the Rocky Mountain Wave and it begins from the first pitch — becoming louder and more disorganized as the game goes on.

Dinger morphs into an evil purple version of the opposing team’s mascot every game. One day he’s a purple Mr. Met and the next he becomes a purple Philly Phanatic.

Instead of “Take Me Out to the Ball Game,” at Coors Field we play “Get Out of Denver” by Bob Seger.

The purple row of seats becomes the press box for all visiting writers.

Our two-strike noise is the buzzing of bees, bringing fear to a lovely day, and letting baseball know we’re about to sting.

The Rockies could celebrate each win by jumping in the fountain and each loss with a champagne ceremony in the locker room.

We ruin baseball for the rest of the country and become the greatest sideshow on grass.

Of course, these ideas wouldn’t solve anything. We wouldn’t suddenly get respect from the rest of the league, but it sure beats arguing with people over the effects of Coors Field on the game.

Instead, it might be time to insulate ourselves from the baseball world. They’re never going to listen to us — so we have to stop caring about it so much. Baseball can have its history; the Rockies will have its own.

It will be a special pilgrimage, separate from Cooperstown, where an outlaw baseball town keeps the Colorado Rockies spirit alive.

Sure, we ruined baseball by existing. But thinking back on how much fun last year was, I’m ready to continue to ruin things. Someday, if we ever win a World Series, people will discount the victory because of Coors Field.

They’re not a part of our ball club. Let them be ignorant.