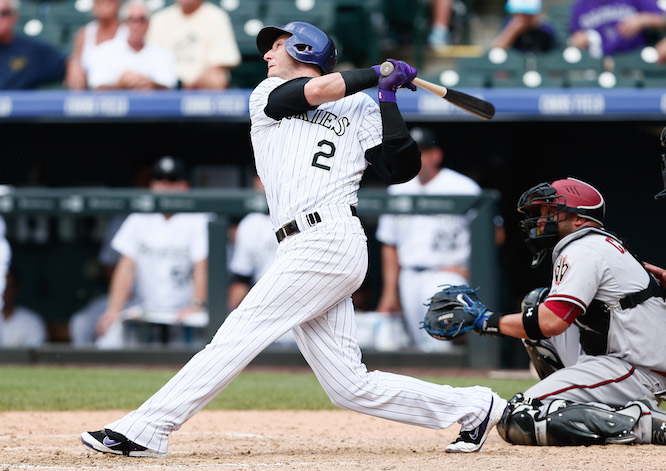 Drafted by the Colorado Rockies with the seventh overall pick in the 2005 amateur draft, Troy Tulowitzki, for nine seasons, was Rockies baseball. The All-Star shortstop affectionately known as “Tulo” made his Major League debut in 2006, at the age of 21, appearing in 25 games at the end of the season. The next year, Tulowitzki cemented himself as the Rockies’ starting shortstop and stayed there, becoming the face of the franchise as Todd Helton aged and eventually retired.

Tulowitzki made five All-Star game appearances, won two consecutive Gold Glove and Silver Slugger awards (2010, 2011) and hit 188 home runs in 1,048 games in a Rockies uniform. He ranks in the top ten in all major offensive categories for the Rockies and was the runner-up for the 2007 NL Rookie of the Year.

Like the Rockies during his tenure as the shortstop and emotional leader of the club, Tulo had both highs and lows. Now that Tulo is headed to Toronto, we can step back and assess those moments that defined his time in Denver.

At 6-foot-3, 215-pounds, Tulowitzki is one of the biggest shortstops in baseball, but he is also one of the most athletic. Two Gold Gloves and a cannon arm are plenty of proof of that now, but in the first month of 2007, his rookie year, Tulo became just the thirteenth player in Major League history to turn an unassisted triple play.

With no outs in the top of the seventh, and runners on first and second base, the Atlanta Braves attempted a double steal. As both runners were heading for the next base, Chipper Jones hit a line drive directly at the shortstop. Tulo caught the liner, stepped on second for a force out, and tagged Edgar Renteria as he approached second base. Tulowitzki than threw to first base (just in case the Rockies could record four outs and keep one for later). Video of the unassisted triple play is below.

An impressive play from a 22-year-old, Tulo made many more like it his rookie season. He finished second in the 2007 Rookie of the Year voting, hitting .291 with 24 home runs and 99 RBIs while imitating a vacuum cleaner at short. For most Rockies fans, however, 2007 is remembered not for the beginning of Tulo’s career, but for the playoff run known affectionately as “Rocktober.”

Over the course of 29 days in September and early October, the Rockies won 21 games and lost just once, shocking the baseball world en route to a World Series appearance. The rookie was on fire in the month of August that year, hitting .333 with six home runs and 25 RBI. Tulowitzki stayed hot into the final month of the season and the playoffs, hitting .291 in September and October of 2007 and blasting six homers and driving in 27 runs while helping the Rockies reach their only World Series in franchise history. Tulowitzki also drove in the first run in Rockies World Series history, in the second inning of game one against the eventual champion Boston Red Sox.

Hitting for the Cycle

In August 2009, Tulowitzki hit a seventh inning triple to complete the cycle in an 11-5 victory over the Chicago Cubs at Coors Field, becoming the fifth Rockies’ player to hit for the cycle. Tulowitzki and former Red Sox shortstop John Valentin are the only players in MLB history with an unassisted triple play and a cycle during their careers.

Colorado made the playoffs for the second, and last, time of Tulo’s Rockies career in 2009. Unfortunately, the Rockies lost the series to the Philadelphia Phillies 3-1 in the NLDS, though they wouldn’t have made the playoffs without Tulo’s scorching September. Tulowitzki hit .350 in September/October, homering eight times and driving in 19 while helping the Rockies clinch a playoff spot by going 20-11 over the last 31 games.

September 2010 was another scalding month for Tulowitzki. The All-Star hit 15 home runs in the month, one less than the NL record for September, held by Ralph Kiner. He earned National League Player of the Month honors as a result.

A Tale of Two Halves

In 2014, Tulowitzki hit .340 with 21 homers in 91 games. The shortstop entered the All-Star break leading the league in hitting, but only played two more games after that. For the first half of 2014, Tulo was the best player in baseball.

For as hot as he was in the first half of 2014, the second half of the season was equally disastrous. Following an injury in late June, Tulo played just two games in the second half of the season before undergoing season-ending surgery in August to repair a torn labrum in his left hip. In what was proving to be a lost season for the Rockies, Tulowitzki could do nothing on the field, or as a trade option, to help his team improve.

Tulo was a major piece of the 2007 team that went to the World Series, as outlined above, but in the actual playoff games during “Rocktober,” the rookie struggled. The shortstop went 8-41 over the playoff run, good for a .195 batting average. In 11 games he had just one home run and 3 RBI to go along with 15 strikeouts.

In 2008, coming off an outstanding rookie campaign, Tulowitzki tore his thigh tendon. That injury cost the sophomore 46 games. Just three weeks after returning from injury, the Rockies’ shortstop sliced his right palm when he pounded his maple bat into the ground in frustration and it shattered. The injury, which occurred when Tulowitzki was replaced in the seventh inning, sent the All-Star back to the DL, this time for a 15-day stint. The injury, and the way it occurred, proved that Tulo had a lot of maturing to do.

“It’s definitely a lesson learned,” Tulowitzki said at the time via ESPN. “I need to control myself better. To pound a bat into the ground, it was the wrong thing to do. Next time I’ll handle the situation differently. I messed up. I’m willing to take blame for it.”

Tulo returned and hit well in September, but struggled over the course of the season, batting a career low .263 during his second year, and hitting just 8 homers in 101 games. It was undoubtably a major sophomore slump following an exhilarating rookie year.

The major low point of Tulowitzki’s career has long been his ability to stay healthy. Tulo played in just 47 games in 2012. He set his career high in games played his rookie year, with 155, and has only played in 140 or more three times in his nine year career. Troy Tulowitzki is as talented as they come, but has battled injury nearly every single season.

Much to the chagrin of the ticket-buying public, Sundays at Coors Field became a day to watch Tulo take batting practice and usually nothing more. In an effort to keep the oft-injured shortstop healthy through more of the season, the Rockies employed a “designated” rest day for Tulo on almost all afternoon games – or virtually every Sunday.

During his time in Denver, Tulowitzki also developed a reputation as a player who had a knack for hitting home runs when it didn’t matter and failing to deliver in the clutch. In his last at-bat in a Rockies uniform, for example, Tulowitzki came to the plate as the go-ahead run with none out in the top of the ninth and two runners in scoring position. He grounded softly into a fielder’s choice.

The 2015 All-Star game offered another glimpse into Tulo’s typical performances in the clutch. In a one-run game, Tulowitzki came to bat in the bottom of the fifth with two on and two out. With a national audience watching and a chance to change the complexion of the entire game, Tulowitzki hit a fielder’s choice chopper to second base to end the inning.

Sadly, many Rockies fans will take moments like his last at-bat in a Rockies uniform, a weak groundout, and his last home game, in which he was rested on a Sunday, as their lasting memory of the greatest shortstop in the young franchise’s history. But through the highs and lows, no one would dispute what a relentless competitor Tulowitzki was and how desperately he wanted to win. Because of that, it’s no doubt fans will wish Tulo nothing but success in Toronto.