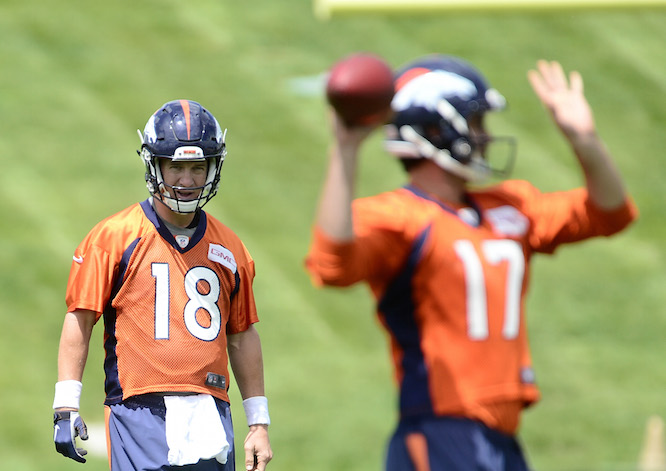 The Denver Broncos improved to 3-0 Saturday night with a late 19-12 victory over the San Francisco 49ers at Sports Authority Field at Mile High. The game was a back and forth tilt with several lead changes and primarily only the first and second string players participating.

When the clock struck zero and the Broncos exited the field, three trends were crystal clear. The Peyton Manning led offense continued to struggle in the read zone while Brock Osweiler and Ronnie Hillman continued to impress. Lastly, the already good defense is looked great with the help of several young players.

Manning and the offense’s woes

Manning once again struggled to find a rhythm in Gary Kubiak’s offense Saturday night. Although the team moved the ball much better than last week in Houston, the team stalled on their three trips into the red zone with Manning. The team came into the contest converting touchdowns only 25 percent of the time in the red zone and went 0-for-3 with No. 18 under center, one of which was an interception.

“The biggest thing offensively is we don’t have a lot to show for some of the good things that are going on. You hold the ball for 20 minutes in the first half, you’re over 50 percent on third downs, you think you’d be scoring some points. That’s the thing that’s discouraging,” Kubiak said in his postgame press conference. “I had us in a couple of tough situations that I’ve got to do a better job of with our quarterback. They’re things that we can fix. Now there needs to be a sense of urgency. We’ve got a couple weeks yet to get some things cleaned up.”

The Broncos have been used to racking up big numbers on the score board but so far are just averaging 18.1 points per game through three weeks of preseason. The team moved the ball with good balance, passing 21 times and running the ball 17 but only got three points on offense by halftime when Manning and the other offensive starters called it a night.

“We moved the ball well out of both scenarios, just didn’t score touchdowns. Some good things out of it, but we obviously have to do a better job in the red zone and better throwing by me. I’ve overthrown Demaryius (Thomas), really, twice. Once on the interception and I missed him another time and it would have been a touchdown,” Manning said after the game. “We’ve just got to do a better job of finishing down the red zone.”

To Manning’s credit he was not as critical as he could have been when referencing Cody Latimer’s dropped slant route on third-and-goal in the second quarter. The second-year wide receiver had the ball hit his hands while the 49ers brought seven players on a blitz. It would have given the Broncos a nine point lead but Brandon McManus subsequently made a 21-yard field goal for the 8-3 lead. Manning finished the game completing 14 of 21 passes for 124 and an interception. Manning will not play in the preseason finale Thursday and has 15 days to clean up their red zone woes when they return to Mile High Stadium for the regular season opener against the Baltimore Ravens.

The good defense looks great thanks to youth

DeMarcus Ware and Von Miller both had big plays Saturday. Miller got a sack on the second play of the game and Ware recorded a safety on the first play of the 49ers third drive. Fans are used to seeing those players fly around and they certainly look ready for the season but it is the youth of the roster that has been an enormous surprise in preseason.

The already stacked defense has gotten big contributions from rookies Shane Ray and Darius Kilgo, as well as second-year outside linebacker, Shaquil Barrett. In each of the team’s three preseason games they have constantly pressured the quarterback, batted balls down and made sure tackles. Ray has used Ware and Miller as mentors and has tried to elevate his play to their Pro Bowl level each day.

“Being a competitor and seeing what they do, I want to be on that level. Like, Shane, you have got to go, you got to make these plays and you have got to do what the great ones do if you want to be remembered. I want to make my name worth something. It’s just a day-by-day process,” Ray said Saturday.

Saturday night the team continued what they started in Seattle and Houston. They allowed 113 rush yards and zero passing yards in the first half. Ray, Kilgo and Barrett combined on the evening for 10 tackles, three for a loss, a sack and a pass defended. They played in three of the four quarters and were constantly in the quarterbacks face. Through three games the Broncos have 15 sacks and are allowing only 14 points per game.

There has been surprisingly little dropped off in execution from Miller to Barrett and Sylvester Williams to Kilgo. That depth will be vital in the team’s overall success. It seems that the Wade Phillips’s scheme is simple enough to where any player can just jump in and play fast. Inside linebacker, Danny Trevathan, who played in his first game since last December, talked briefly about the mental side of the new defense after the game.

“He’s (Phillips) just an old-school coach and he kicked it to us real. He told us to just go out there and play ball. Don’t worry about anything. Just play ball, know what you’re doing, be fundamentally sound and just play ball. It’s going to work out for good. We have the pieces to the defense. For us to go out there and showcase this, it’s just showing that we’re working towards our goal to be the best defense in the league.”

Hillman and Osweiler, both fourth year players in contract years, have had an excellent preseason and it continued against the 49ers. Hillman continued to run with purpose and finished the evening with a 7 yard per carry average and gives him a total of 155 yards on 21 carries through the preseason. He played primarily in the first half with C.J. Anderson and only had one carry in the second half. His success has limited last year’s projected starter, Montee Ball’s playing time. Ball did not enter the game until early in the fourth quarter.

Osweiler has been superb throughout the preseason and has shown that he has learned the offense quickly and the balance and play-action attack is something he can run. Playing the entire second half Osweiler completed 15-of-20 passes for 104 yards and a rating of 86.2. He also led the nine-play, 89 yard drive that ended in the games only touchdown and the game winner with 2:04 left in the contest.

“The one thing I do know about coach Kubiak’s offense is I really like it. I’m getting more and more comfortable each time we go out on the field and play with this system. I think the biggest thing tonight is that it was our third preseason game, a little more comfortable and more game reps. We did some good things tonight,” Osweiler said after the win.

Osweiler is 37-for-56 with a passer rating of 89.6 through the three games of the preseason. He has looked better than ever in the last few weeks and it could be a combination of the system and the increased repetitions at practice. Either way he has earned the back up role and given fans some hope for his future with the team. He has one more opportunity to prove himself when the Arizona Cardinals come to town and he was already looking forward to it just moments after the win.

“I can’t wait for Thursday night. It’s another great opportunity to go out there and play football here in Denver. Any time that you can do that, it’s exciting. (I’m) very excited for Thursday night, but we need to start with tomorrow as far as cleaning up this game. There are some mistakes that we made, and we’ll clean those up and get ready for Arizona.”

Saturday the starters looked ready on defense while the offense continues to search for their identity. The fourth preseason game will be to find the final few players who will create the depth of the team. The starters will have to take any momentum or lack-their-of into the next 15-days of practice in order to be ready for the regular season opener. Some players are trending in the right direction while others will need to study up in time for when the final score really matters.

The paid attendance for the game was 76,149. The Broncos, after being heavily penalized in Houston, were only called for four penalties while the 49ers amassed 13. The Broncos offense had 24 total first downs to the 49ers 11. The Broncos also held the ball for 36:42.

Between Spencer Lanning and Brandon McManus, the team had all five kickoffs reach the end zone with three being called for touchbacks. McManus missed on a 55-yard field goal but connected from 37, 21, 45 yards.

Jordan Norwood led the team in reception yards with 38 as he continued to fill in for the injured Emmanuel Sanders. The four running backs that played combined for nine catches totaling 54 yards.

David Bruton Jr. led the defense with five total tackles on the evening with Kilgo and Steven Johnson grabbing four.