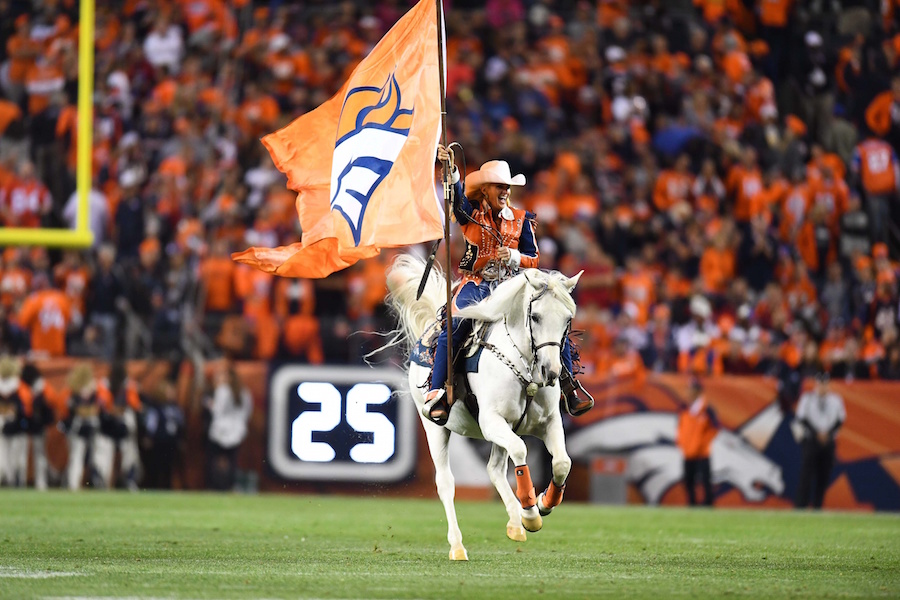 Last year, the weather stole Thunder’s thunder. The most famous horse in Denver is getting another crack, though.

On Thursday, Jan. 4, Thunder, owner Sharon Magness Blake and rider/trainer Ann Judge, will lead the tradition of Longhorn cattle, horses and western wagons through the streets of downtown Denver to celebrate the start of the 2018 National Western Stock Show. The parade begins at noon at Union Station and marches 15 blocks down 17th Street.

“Unfortunately, we did not have a parade last year and so we are thrilled for a second chance to celebrate Thunder, not only as the best mascot in the NFL, but also as a symbol of our western spirit and a representative of the equine community,” said Paul Andrews, President & CEO of the National Western Stock Show, in a release. “Sharon, Ernie and Ann are an invaluable part of the Stock Show family and embody the western lifestyle. We appreciate them sharing Thunder with us and with all of Denver.”

Owners Sharon Magness Blake and Ernie Blake are celebrating Thunder’s 26th year as the Broncos mascot, and they have been equestrian ambassadors for more than three decades.

“After being involved at the Stock Show for over thirty years, I am so excited that Thunder has received the honor of being the grand marshal of the Stock Show parade,” said Magness Blake in the release. “Thunder is one of the most amazing horses I have ever owned.”

Thunder (III), a 2000 grey Arabian gelding registered as Me N Myshadow, initially served as the understudy for Thunder II and was trained specifically for the role of team mascot. While that might be where their main focus lies, Thunder and rider/trainer Ann Judge have many duties off the football field.

“I have been both a horse show judge and an exhibitor at the Stock Show for over twenty years, but nothing will be as thrilling as piloting Thunder along the parade route as he serves as the grand marshal of the National Western Stock Show,” said Judge.

The Stock Show Parade concludes with the annual barbecue lunch, sponsored by Colorado State University, in the atrium of the Wells Fargo Building at 17th Street & Broadway, 11:30a.m-1:30p.m. Lunch guests will enjoy great western barbecue, music, and the City of Denver’s proclamation of January 4, 2018 as DRESS WESTERN DAY in Denver. The barbecue is open to the public and benefits the 4-H International Youth Group. Lunch tickets are $10.