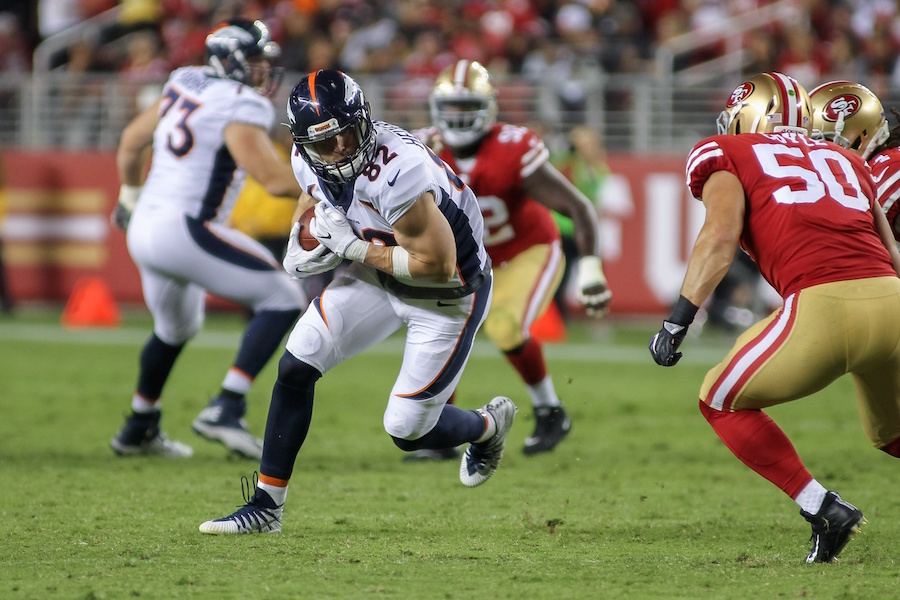 The Denver Broncos have made it through the bulk of the preseason having answered most of the questions the team faced during the offseason.

Yes, rookie left tackle Garett Bolles will start at left tackle. Jamaal Charles appears healthy enough to be a part of their plans moving forward. The defense is still elite. And, of course, Trevor Siemian will be under center for the start of the 2017 season.

One area the Broncos have needed improvement in is the tight end position, which hasn’t provided much support for the offense during the preseason.

With only one game left in the preseason, the tight ends on the roster will all need to show something special in the final preseason game to not only carve out playing time in the upcoming season, but also secure a roster spot.

The Broncos’ depth chart reveals that 2016 starter Virgil Green has remained the No. 1 tight end on the roster, followed by Jeff Heuerman, A.J. Derby, Austin Traylor and Steven Sheu. 2017 fifth-round draft pick Jake Butt is on the NFI (Non-football Injury) list as he recovers from offseason surgery for a torn ACL.

Behind Green, the Broncos should opt to keep two other tight ends on the roster.

The likeliest trio is Green, Derby and Heuerman due to their experience with the team. For the 2017 season, it would be surprising if the Broncos decided to part ways with any of those tight ends.

However, just because they are likely going to make the roster, does not mean that the Broncos can rest easy with what they currently have at the tight end position. The team will need to see much better play from the position group during the season, or Butt could be coming for one of their jobs as soon as he’s healthy.

While Green has received most of the playing time, neither he nor any other tight end on the roster has stepped up and shown a great performance in any of the Broncos’ preseason games. Green’s 30 yards against the Packers was the most yardage from any tight end during the preseason.

In the same game, Derby registered just one catch for six yards, while Heuerman finished the game without a single reception.

With Jake Butt still recovering from the ACL injury he suffered in his final game at Michigan, he isn’t likely to be on the active roster until the latter half of 2017. If the Broncos’ current tight ends do not produce on a consistent basis, Butt could get an early opportunity to prove he can be the playmaker the Broncos need at the tight end position.

All three of these players have shown flashes of potential to be a go-to target at the tight end position. While the results in the preseason haven’t necessarily reflected this, the Broncos remain very high on their tight ends. Now, it’s just a matter of producing when the Broncos take the field for games that count.