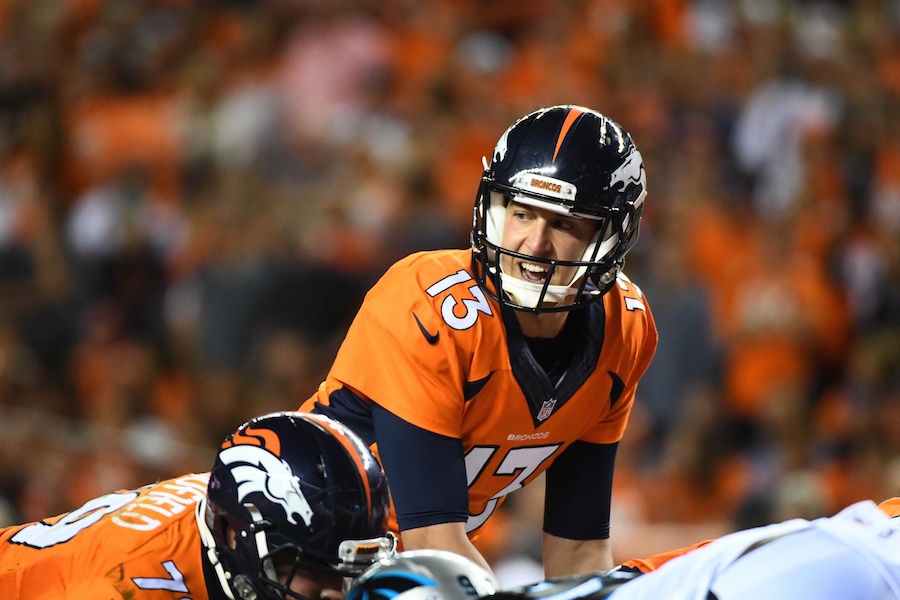 The Denver Broncos opened up the regular season with a 21-20 victory over the Carolina Panthers on Thursday night. The win was a nice way for Denver fans to begin the season, but the takeaway from the game is that Trevor Siemian is plenty good enough for the Broncos to win, and the second year pro is only going to get better.

Siemian’s numbers were average, at best: 18/26 for 178 yards, two interceptions, a touchdown pass and 20 rushing yards on five carries. Siemian was also sacked twice in the game for a loss of 19 yards. Fortunately, in Gary Kubiak’s system, statistics don’t matter and poise does at the quarterback position.

For the most part Siemian looked very good. He showed he could move the Denver offense down the field and make correct decisions. The Broncos did turn the ball over three times inside Carolina’s 30 yard line. However, I only blame Siemian for one of the turnovers.

Siemian threw an ill-advised ball to Emmanuel Sanders that was picked off while he was under pressure. In time, Siemian will recognize what types of throws he has the arm strength to make in this league. The other interception Siemian threw was on a tipped ball where Kubiak should have just ran instead and taken the three points.

The important characteristic about Siemian is his poise. From the get go Siemian showed that the stage was not too big for him. He showed the ability to bounce back after tough breaks. And, most importantly, he proved he could make plays to rally the Broncos from behind when it mattered most.

Siemian clearly has confidence playing the position, and it seems to have rubbed off on Denver’s skill position players. Siemian also adds mobility to the quarterback position, which is something Denver lacked last season.

One area where Siemian can improve in future games is targeting different options. 17 of Siemian’s 18 attempts were intended for Demaryius Thomas, Emmanuel Sanders, Virgil Green and CJ Anderson. There’s nothing wrong with going to your main guys when you have to get completions, but defenses will eventually pick up on the fact that Siemian is falling in love with his main options underneath.

Overall, fans should be impressed with Siemian. It seems Denver has found its man to lead the offense until Paxton Lynch is fully ready and that was the biggest question I had going into the opener.