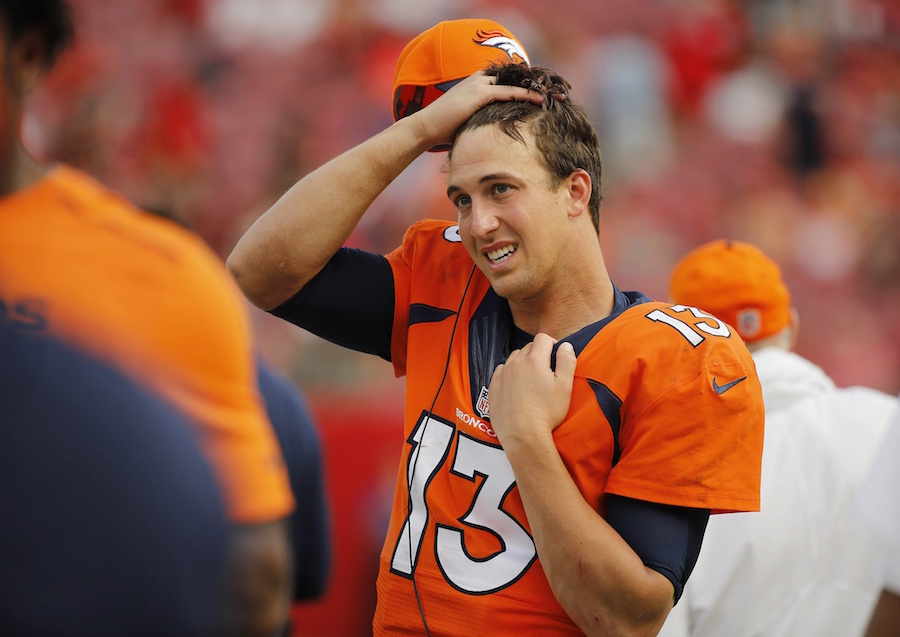 Tis the season for reading between the lines.

“Podcast topic of the day – Clinton +3 nationally: what does it mean?”

“Op Ed: Can the bricklayers of Pennsylvania be the swing voters Trump needs?”

“2017 will be one second longer than 2016, which political party should be FREAKING OUT? Our top story at 5 o’clock”

If you thought journalists in the sports industry had a lockdown on minute-to-minute hot takes and speculation based on the most mundane details, you’ve obviously been ignoring the 2016 presidential race (bless your soul). This year political pundits have redefined hot takes and laboring over the facts that an average person overlooks (or would like to). Sports reporters are getting beat at the game they invented. It’s time to buck that trend.

Yesterday, Trevor Siemian was voted a second-half team captain by his teammates. Here are three smokin’ hot takes regarding this development. Time to weigh in on the midseason favorability test at Dove Valley.

First, the offense finally has the true leader it needed. Siemian hasn’t played great (or even average) at times, but who can deny he’s not a better leader than Demaryius Thomas? No. 88 is a physical specimen that has all of the tools to be the best receiver in the NFL, but he’s never shown the traits of a leader. If Thomas can’t get out of his own head when it comes to playing football, how in the world is he going to be there for the other guys? He regularly struggles to keep his focus during games; he has admitted in the past that off-field issues affect his play and continues to make costly mistakes. This is reportedly starting to wear thin on the Broncos’ top brass according to Jason Cole. Not really the attributes you look for in a captain.

Siemian on the other hand has owned the leadership role on this team since training camp, which is part of the reason he won the starting job. He’s taken responsibility for the offense’s struggles and hasn’t shied away from criticism. Denver’s offense has looked like a rudderless ship more often than not this season. Hopefully with a real captain at the helm they can start to turn it around.

Second, Paxton Lynch must look awful in practice; like Jared Goff awful. As stated above, Siemian hasn’t done much of anything on the field to keep his job as the starting quarterback. Over the last two weeks Denver’s offense has been brutally inefficient. Denver’s first half against San Diego was the epitome of this as they went field goal, punt, punt, punt, punt, fumble and turnover on downs. This had most people clamoring for Lynch.

Gary Kubiak stuck it out with Siemian Sunday but expressed his frustration with No. 13’s decision-making on Wednesday. Yet, the job is still his. Couple that with the team voting Siemian a captain and you have to believe that everyone at Dove Valley believes Lynch would be a disaster under center and this is a subtle hint to the world of just that. What other possible explanation is there? If Lynch can’t beat out the ultimate game-manager (and the team sees that on a daily basis at practice) Elway may have wasted another draft pick on an overrated quarterback.

Third, Kubiak definitely held a midseason favorability test to take the heat off of Siemian. Since when did NFL teams start voting for midseason captains? This whole thing reeks of the soccer mom “everyone-gets-a-trophy” mentality. Siemian’s play is really starting to come under the microscope. Sunday, for the first time, Denver’s offense attracted the ire of the boo birds. Kubiak is essentially deflecting the negativity by reminding people of how great a leader Siemian is. (Pretty much the same narrative we’ve been hearing all year about the Northwestern product but repackaged with a shiny bow.) Did Denver’s offense (or defense or special teams) really need another captain? No. What Kubiak really needed was a way to keep everyone’s minds off of Siemian’s subpar play. NOTHING TO SEE HERE.

There wasn’t a corner of Broncos Country that found yesterday’s midseason captain announcement odd. What? Huh? Why now? Those were the main reactions to a story that felt extremely manufactured. And, if you read between the lines, it’s easy to see there are only three plausible explanations for what happened – Denver needed a real leader on the offense, Lynch must be really bad or Kubiak needed to deflect the criticism away from Siemian.

Nothing else makes sense (or rather this isn’t the season for making sense if you want to keep up with the hot-take, tea-leaf-reading political pundits).