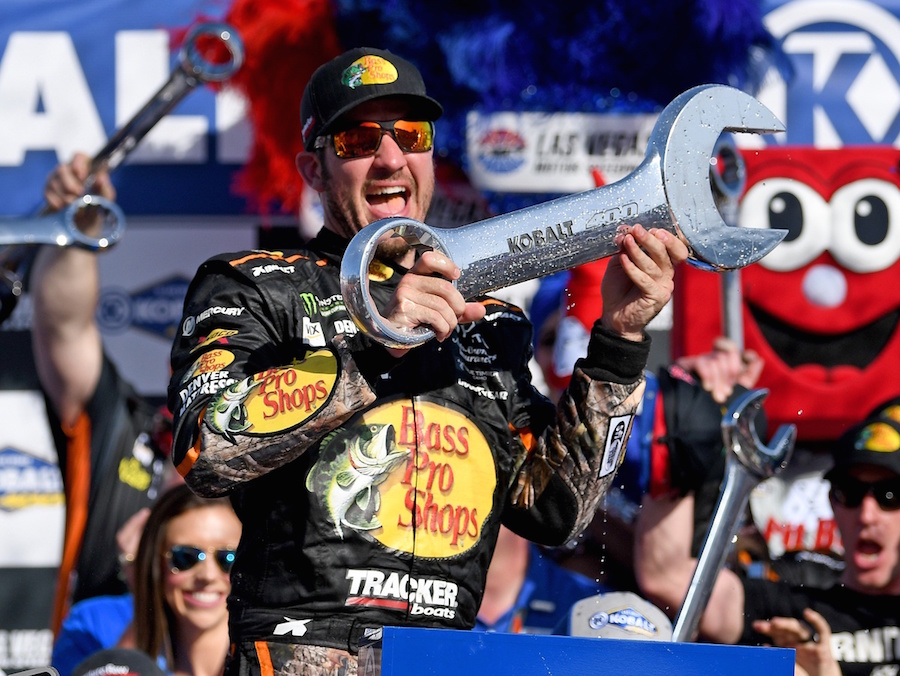 In Vegas parlance, you could say Martin Truex Jr. ran the table was dealt a full house or hit the jackpot in Sunday’s NASCAR Cup Series race at Las Vegas Motor Speedway.

The Furniture Row Racing driver swept the Kobalt 400 by winning the two stage races (Lap 80 and Lap 160) and later claiming the overall victory at the 1.5-mile track. He earned the maximum number of standing points (60) — 10 for each stage win and 40 for the race victory.

The two stage victories and the race win also gave Truex a total of seven playoff points – one for each stage win and five for the race victory. Playoff points accumulated during the 26-race regular season carry through the first three rounds of the post-season.

“It’s a dream come true driving these cars for these guys and hopefully we can keep this momentum going,” said Truex, who qualified second and led six times for a race high of 150 laps in the 267 lapper.

Driving the No. 78 Bass Pro Shops/TRACKER Boats Toyota, Truex retook the lead from Brad Keselowski with two laps remaining to capture his eighth career NASCAR Cup win and his sixth as a Furniture Row Racing driver.

“Yeah, the last couple of laps were great,” said Truex, who became the first driver to sweep the new stage racing format. “We had such a good car all day and felt like it slipped away from us. The No. 2 car (Keselowski) got out front on that last restart and I really thought we were going to run second. Got a bit lucky with him having an issue. We never give up and that’s why you keep fighting until the end.

“But honestly I’ve been on the other side of those things plenty of times so it definitely feels good to take advantage of someone else’s issue for once and go to victory lane. We had speed all weekend with our Bass Pro Shops/TRACKER Boats Toyota. It was just a matter of getting the balance right.”

The victory virtually punched Truex’s ticket into the post-season playoffs.

Truex, whose longest stretch of leading the race was 55 laps – from laps 157 to 211, gave praise to his team and sponsors who support the No. 78 program.

“The pit crew was unbelievable today and you have to thank them,” noted Truex. “I can’t say enough about everyone on this team. They made a lot of changes last night and we said go for it, and they did. I’m really proud – this is the first victory for the 2018 Camry and to be out here on the west coast – this is a big one for us!

“Tons of people to thank on our team, with Barney (Visser, team owner), Joe (Garone, team president), our crew at the track and at the shop back in Denver, Furniture Row, Denver Mattress – my buddy Johnny Morris for believing in us and coming on this car with Bass Pro Shops and TRACKER Boats. Proud of Toyota and TRD – these engines have been unbelievable this season so far. We have Auto-Owners coming back this year. And new to us this year are 5-hour ENERGY and WIX Filters.”

Visser, who started Furniture Row Racing 12 years ago, was quick to praise his two teams during post-race interviews.

“I’d like to thank the guys back at the shop,” said Visser. “They have put several hundred hours in the last three weeks to catch up on the car bodies. I just kept thinking of how hard these guys push themselves. It’s really special and I can’t thank them enough.”

Cole Pearn, the No. 78 crew chief, who has been atop the pit box for all seven Furniture Row Racing career wins (one as lead engineer, six as crew chief) said, “I wasn’t terribly happy with our car yesterday in practice so we changed a lot going into today and didn’t really know what to expect. The pit crew was flawless — they helped us get the lead a couple of times.”

Truex gained three spots in the point standings and is currently ranked fourth, five points behind series’ leader Keselowski. Truex’s seven playoff points is the most of any driver after the first three races of the season.

The race had 14 lead changes among six drivers and there were six cautions for 34 laps.

The next Cup race is Sunday March 19 at Phoenix International Raceway.