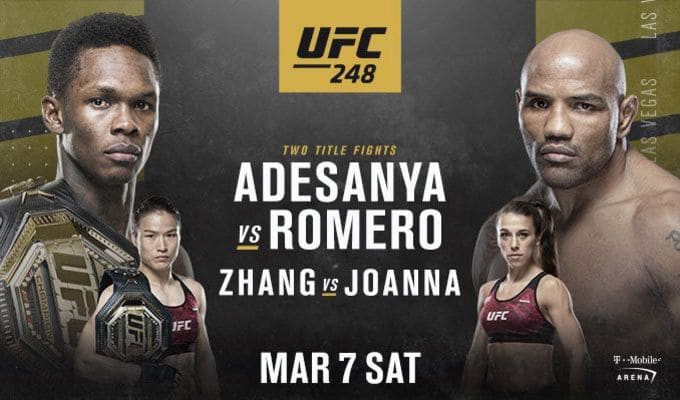 The main event of UFC 248 between Israel “The Last Stylebender” Adesanya and Yoel “Soldier of God” Romero for the middleweight championship has the potential to be one of the most exhilarating title fights of all-time.

The challenger, Romero, may just be the biggest genetic freak ever in combat sports. At a ripe age of 42-years-old, is still more athletic than 99.9 percent of the field. At a press conference last month promoting the fight, Romero and Adesanya started to have a dance-off, and Romero dropped the mic with a backflip into the splits. He did this off the cuff with no warm-up, in blue jeans. Again, 42-years-old.

The undefeated 18-0 champion, Israel Adesanya, got his first taste of UFC gold in a gritty five-round war against Kelvin Gastellum. Adesanya proceeded to solidify his undisputed championship status with a second-round knockout over Robert Whittaker at UFC 243.

Both of these two fighters were also world-class athletes who competed at their respective highest levels.

Romero was the 85 kg silver medalist at the 2000 Olympic Games in Sydney, Australia, while representing Cuba. That’s right — 20 freaking years ago. Romero even got the best of American wrestling legend Cael Sanderson multiple times during his freestyle career.

Romero defected from Cuba in 2007 to Germany and made his MMA debut in 2009. In 2013, he made his UFC debut and rolled through the middleweight division amassing an eight-fight win streak in which he set a record with most flying knee knockouts. “The Soldier of God” has had three title shot opportunities, potentially making this his last chance should he fall short Saturday night.

In those title fights, he lost the first to Whittaker by unanimous decision. He then fought for the interim title against Luke Rockhold and completely knocked his block off, however, Yoel missed weight and voided his championship eligibility. In the Whittaker rematch, Romero lost a controversial split decision in a fight where Romero hurt the champion on multiple occasions. It is worth noting that Romero also missed weight in this fight by 0.2 lbs. Romero made championship weight at 185 lbs. on the dot Friday morning.

Adesanya describes himself as being “player one”, meaning he is living in his own video game and controlling all of the moves in front of him. Before crossing over into MMA and going on a meteoric rise, he was a champion kickboxer with 80 professional fights.

There is not another fighter like Adesanya. He is the biggest superstar in MMA, not named Conor McGregor (but he is well on his way). “Stylebender” is a walking, talking meme and self-described “internet kid” who is so culturally in-tune and self-aware that he has built a cult-like following. His walkout dance routine to the cage for UFC 243, along with the celebration after knocking Whittaker out, were scenes that will be played on highlight reels for the rest of time. Sequences from the Anderson Silva near mirror-match have been widely used in the promos for this event. His warrior status was cemented in the Gastellum fight where going into the last round, he was caught on camera, saying that he was prepared to die.

Because Adesanya has only been in the UFC for less than two years (made his debut February 11, 2018), many are still not entirely on board with the champ and believe he is just hype. Folks, the hype is real. He is the fastest fighter to ever get to 7-0 in the promotion. He has the second-highest strike defense rate in the division. He has had highlight-reel knockouts and has also shown that he can swim in deep water.

One thing is for sure, the real winner of this fight is the fans.

No one — and I mean no one — calls out Yoel Romero. Izzy did. The champion said he is on a quest for legacy and that his trophy mantle would not be complete without a win over Romero, whom many (especially Darren Till) believe is the scariest fighter on the planet.

Romero possesses ungodly, explosive power that he uses in sprints and bursts, while his counterpart is much more tactical and patient in his approach (see Derek Brunson fight). Romero rarely uses his wrestling, so it will be interesting to see if he implements any of his ground game against the striking expert.