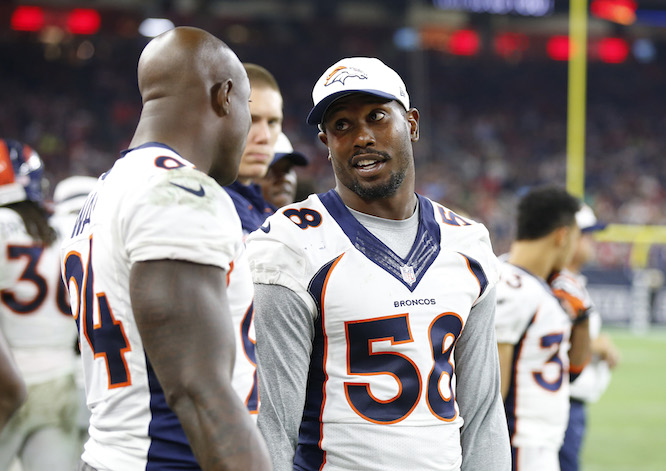 From the day he set foot on an NFL field, Von Miller has been a dominating force. But his conduct off the field has always slowed him down. That is, until last year.

Over the course of the past year, Miller has undergone an impressive transformation of character – from a guy who was one strike away from being out of the league to a guy who is now being considered as one of, if not the, leaders of the Broncos defense.

It’s all thanks to DeMarcus Ware, says Kent, Benny and Ben of The Big Show on Mile High Sports AM 1340. These three football insiders say Von is primed to have a monster year on the stat sheet, but what’s more impressive is how he’s conducting himself off the field.

“He’s nailing press conferences,” says Kent Erickson, who spent more than 20 years with the organization in their film department. “He mature, funny, engaging,” Erickson says; “There no more of this ‘I have to’ attitude when dealing with the media.”

But it’s not just how Miller is handling pressers, Benny Bash and Ben Allbright point out. Miller has learned how to be a pro on all levels due in large part to last year’s big free agency acquisition, Ware.

Miller, who is in a contract year, will get paid regardless of his off-field activities, notes Allbright, because pass rushers are the second-highest paid group after quarterbacks, but Miller’s emergence as a leader on the field and in the locker room will be huge factors in landing Miller one of the biggest contracts the NFL has seen at his position.

Ware, a four-time All-Pro, was not as productive as Erickson and Bash would have liked – netting 10 sacks, mostly early in the year – but they do concede that the positive impact he’s had on Miller can’t be undervalued.

2015 looks to be a monster year on the stat sheet for Von Miller, which should be handsomely rewarded with a massive contract in 2016. Two years and a DeMarcus Ware ago, those things weren’t so certain.

Listen to The Big Show every weekday from 2p-4p on Mile High Sports AM 1340 or Listen Live any time online for the best local coverage of what’s new and what’s next in Colorado sports.