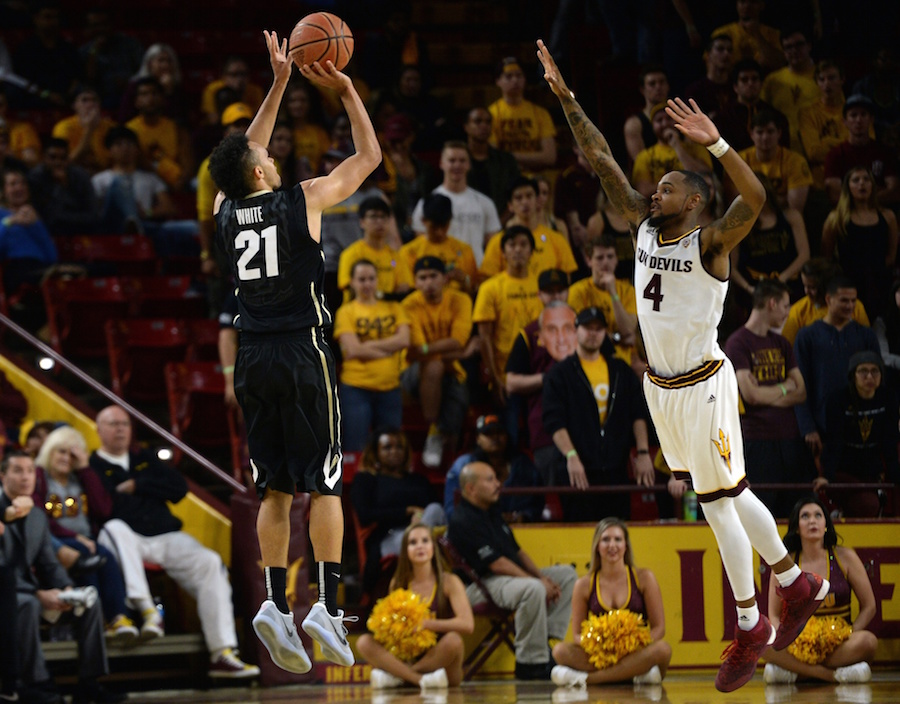 Senior guard Derrick White had an incredible night on the floor Thursday, but after one unfortunate misstep as time ran out in Tempe, White and the Colorado Buffaloes dropped their second straight game of conference play in a heartbreaker to Arizona State, 78-77.

White, who entered the game with a Division I career high mark of 23 points, blew his old scoring record out of the water with 35 points, which he complemented with five assists, five rebounds and three blocks. In the end, he was Colorado’s (10-5, 0-2) savior and Colorado’s undoing.

With 20 seconds left in the game, White sunk a layup to give the Buffs their final lead. The Sun Devils (9-7, 2-1) rushed to the other end of the court, where Torian Graham missed a three-point jumper followed by a botched shot from Tra Holder. But with 1.6 seconds on the clock, the refs called White for a defensive indiscretion that sent Holder to the line, where he sunk both free throws. The Buffs didn’t have a prayer to get off one last shot.

That’s not where the excitement started, however. Toward the end of the first half, Xavier Johnson and Arizona State’s Jethro Tshisumpa both received flagrant two fouls and were ejected from the arena after Tshisumpa shoved Johnson, and Johnson was perceived to do the same.

By that point, Johnson had built up a 13-point résumé. The Buffs desperately needed someone to pick up his slack in the second half, and that’s where White came into play – literally.

For the night, the Buffs shot 46 percent to ASU’s 47 percent. Although White and Johnson were the only two Buffs to hit double-digits, five Sun Devils picked up the slack on the other end of the floor led by Torian Graham (18), Shannon Evans II (18), Obinna Oleka (15), Tra Holder (11) and Kodi Justice (10).

After a rough start with very little offensive production for both teams, the Buffs and the Sun Devils spent much of the rest of the first half finding their footing around the rim. It took the Buffaloes a bit longer to find their mojo, however.

Midway through the first, the Sun Devils garnered an eight-point lead before the Buffs started fighting back. Enter Derrick White.

Throughout a 10-point Colorado run late in the half, White accounted for eight as he near single-handedly got the Buffaloes back in the game. With three minutes to go, a flawless three-point dagger from White tied the game back up at 32.

From there on out, the Fiery Fiends regained and held the lead going into the break, but the refs spiced it up a little by ejecting Johnson and Tshisumpa with just over a minute left to play. After blocking Johnson’s shot attempt, the two big men tumbled to the floor and Tshisumpa began shoving.

The blow, while not as detrimental for Arizona State, weakened Colorado’s ionic bonds and threatened to make its offense unstable in the second half. Prior to his exit, Johnson had amassed 13 of Colorado’s 34 points.

Early in the second half, the Sun Devils kept up their antics as they gained as much as a nine-point lead before White, once again, went insane on ASU’s defense.

After bolstering CU’s comeback effort, White sealed a nice 10-point run with another three-point bullet from Steph Curry range to give the Buffs a 56-55 edge for the first time all night.

It was a toss up the rest of the night, with each team exchanging blows before Colorado got the lead for the final time with 20 seconds to go. After two missed shots from the Sun Devils, the Buffs looked to sneak out of Tempe with its first conference win, until White misstepped on defense and sent Holder to the foul line with less than two seconds to go. He sunk both, as Colorado’s chances of winning sunk to single digits.

You Can Bet on College Football in Colorado with Barstool Sportsbook

Get 30-1 Odds for Clemson vs. Georgia with FanDuel Sportsbook

DraftKings Sportsbook Has Hammer the Over No-Brainer for Clemson vs. Georgia