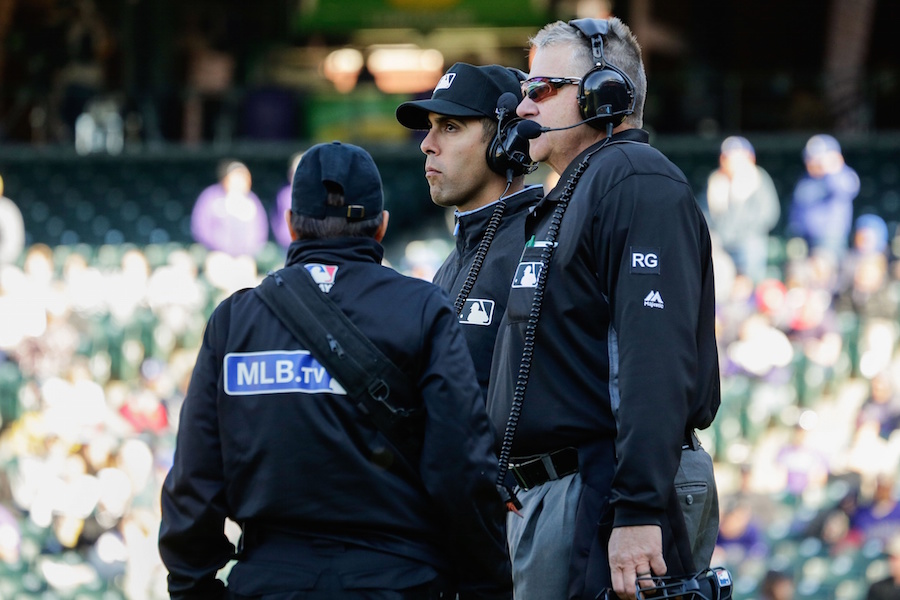 The Colorado Rockies had a chance to earn an important early season sweep of the Los Angeles Dodgers on Sunday, only to have several factors outside their control contribute to an eventual 10-6 loss in the series finale.

Wind gusts of up to 38 MPH wreaked havoc on game play, in several instances negatively impacting the Rockies. Charlie Blackmon saw a base hit bounce in front of him in center field after the wind knocked it off course, and Carlos Gonzalez misplayed a ball off the right field wall after a wind gust sent it in an unexpected direction.

Compared to other adverse weather conditions Denver can throw out in the spring months, Black said he’d rather have cold than wind.

“It’s almost better to have no wind and have it be cold, than windy. It just screws a lot of things up,” Black said.

The wind wasn’t the only thing that caused the Rockies some consternation on Sunday. Black was equally frustrated by a non-interference call that resulted in a pair of runs in the seventh inning.

With runners on first and third and two outs, Tony Wolters attempted a pickoff play to Nolan Arenado at third base. Dodgers third baseman Justin Turner‘s route back to the base took him into the grass portion of the Coors Field infield, causing the ball to ricochet off his back and towards the outfield. Turner would score and Franklin Gutierrez advance to second. Black felt that Turner’s path back to third base should have been ruled interference.

“They said it was non-interference,” Black said about what the umpiring crew told him after they conferred on the play, “and I beg to differ. So that was what they told me.

“I thought it was; they said it wasn’t. But I do like the fact that they conferred and the third base umpire and the first base umpire talked about it, and they deemed that it wasn’t interference.”

At the root of Black’s complaint was the fact that on the play Turner started outside the baseline and came all the way into the infield grass on his path back to the base before being struck by the ball.

“It looked like it to me in real time,” Black said.

Gutierrez would later come around to score on an Adrian Gonzalez single, part of a three-run inning that stretched L.A.’s lead to 9-4 at the time.

Of course, several factors within Colorado’s control also led to the loss. Rockies pitchers surrendered five walks on the day, four of which came around to score, and Los Angeles scored six of their 10 runs with two outs.

The Rockies face the Dodgers later this month in a two-game set in Los Angeles, April 18 and 19.