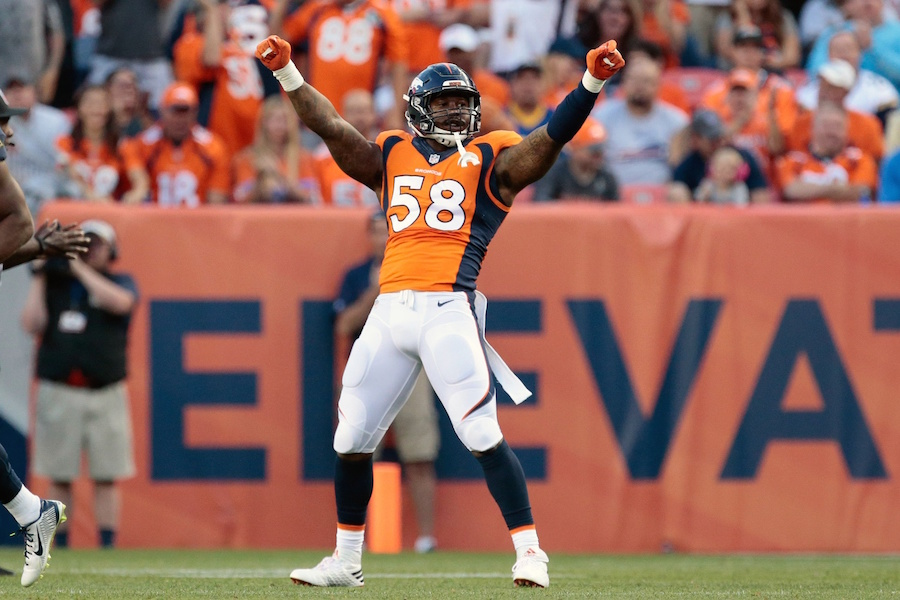 During the offseason,  All-Pro outside linebacker Von Miller projected a 30-sack season for himself in 2017. While, obviously, the notion of 30 sacks in one season is a bit much, the quote represented Miller’s confidence coming into the season.

However, a closer look at Miller’s stats from the end of 2016 and the first game of 2017 reveal that Miller is on a bit of a sack drought. Despite notching 13.5 sacks last season, he has not registered a single sack for five straight regular-season games. Miller acknowledged that he was experiencing the “longest sack-less streak of my career.”

When Miller was asked about his sack-less streak, Miller’s confidence did not waver:

“They’re going to come. I’ve had long streaks before, and I’ve had multiple games with multiple sacks. Elvis Dumervil used to tell me, when he was here, that sacks — they come in bunches. So you can’t really get down or lose motivation out there on the field. And I know that on any given moment, I can make that play.”

Even if his career sack total is not increasing lately, Miller is satisfied with how much time on the field he has seen thus far in the early parts of the season as well as where he’s at, physically, after seeing limited time playing in the preseason.

Given that only a blocked field goal kept the Broncos and Chargers from overtime play on ‘Monday Night Football’, Miller naturally appreciated the final result, but noted: “I was prepared to go into overtime. I’m glad we didn’t, but I was ready. You’re going against high-caliber guys that want it — that takes effort. I was tired, but I wasn’t exhausted, you know what I mean?”

This Sunday, Miller and the Broncos’ defense will play the Dallas Cowboys, who are coming off of a win over the division-rival Giants. Against an elite offensive line, Miller will have his hands full trying to put consistent pressure on quarterback Dak Prescott.

Miller has always played at an elite level, and his mere presence alone opens up opportunity for his teammates to make plays on the defensive side of the ball; something that fans witnessed time and time again on Monday. Soon enough, Miller is due to have a breakout game and break his sack-less streak wide open. It’s safe to say that Miller is confident that Broncos’ fans will get to see him performing his signature “sack dances” after terrorizing opposing quarterbacks soon enough.