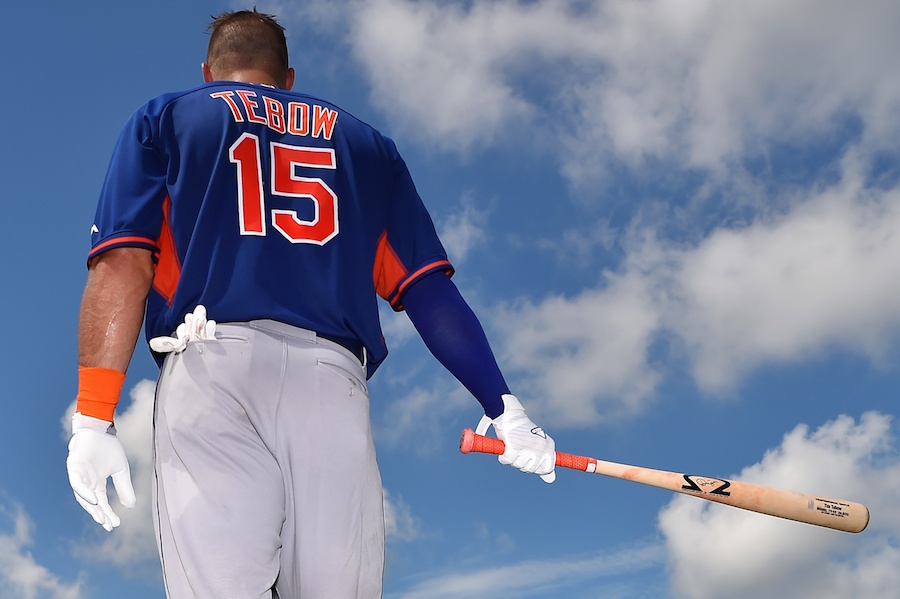 Why do you hate Tim Tebow?

I want you to think about this, and we will come back to it.

Yesterday, in his very first at-bat with the New York Mets developmental league team, Tebow hit a home run. In fact, the former Heisman Trophy winner and two-time national champion at Florida, went yard on the very first pitch he saw in the minors.

Now, I can already hear the critics clamor; I can feel the wave of skepticism and the negative comments wash over me like mud on a newly washed truck. But to you skeptics and anti-Tebow trolls, the facts are the facts. Tebow – a former first-round NFL draft pick, Adonis and overall good guy – came up big when the lights came on. He took the baseball for a ride, sending it over the left field wall. He even sprinted out of the box upon contact.

What more could he have done?

The opposite-field dinger that Tebow hit was not off of Dodgers ace Clayton Kershaw or even off of Rockies starter John Gray. The home run was off of lefty pitcher John Kilichowski. The 22-year-old kid, who was selected in the 11th round of the 2016 MLB Draft, is now developing alongside the 29-year-old former quarterback in the Florida instructional league. Apparently, he has some room to grow; the jury is still out on if he can become a major league arm, especially after surrendering a homer to a baseball newbie.

So back to the question: Why do you hate Tim Tebow?

One of the answers given by my associates in the media is usually to question the genuineness of his behavior. What is his motivation to play baseball or do anything? They say that he is not sincere in his actions, that he is only playing baseball for the attention.

This is hypocrisy at its finest, and usually I dismiss it immediately. Media, at its core, is a business driven by attention. Clicks, listenership, readers and viewers are the driving force of our job. In addition, the attention Tebow gets helps all of us media types get those numbers we so desperately need. So that criticism in itself is not genuine.

Furthermore, if you wanted to field pro sports teams with only players who didn’t want attention, you would find yourself not being able to fill very many rosters. Celebrity is part of the glamour package of being a pro athlete. That is part of the reason it looks so appealing and kids work toward it. To be recognized for talent and positive achievement is always pleasant, no matter what you do.

Within sports and the actions of its athletes and coaches, there are plenty of things to hate, and rightfully so. Domestic abuse, drug usage, acts of violence, gun charges and countless other evil acts we don’t ever know about aren’t hard to find in the sports pages on seemingly a daily basis. Plenty of acts that make our blood boil and hate rise.

But Tebow has no history of any of this. In fact, his résumé is littered with just the opposite.

In May of 2015, the Tebow CURE Hospital held its grand opening in Davao City, Philippines. The hospital was partially built and is operated by CURE International; it specializes in treating children with orthopedic conditions. This is, for the most part, separate from the Tim Tebow Foundation, which is a general organization helping all peoples within the U.S. The TTF was honored and recognized for philanthropy recently in New York in 2015 by the Thrive Network who provides social services to the New York area.

Tebow won the Heisman Trophy, won two national titles, started a foundation, was drafted in the first round by the Denver Broncos and built a children’s hospital. Tebow works harder than most of us could ever imagine. Oh, and he is better looking, too.

I am not the biggest Tebow fan, at least when it comes to watching him play quarterback. But I am a fan of hard work and making our surroundings better by way of helping others. Tebow busts his tail and his hard work has paid off.

I wish the best for Tebow on his baseball path, but I also know that he has already hit plenty of home runs. He does that on a daily basis while no one is watching.