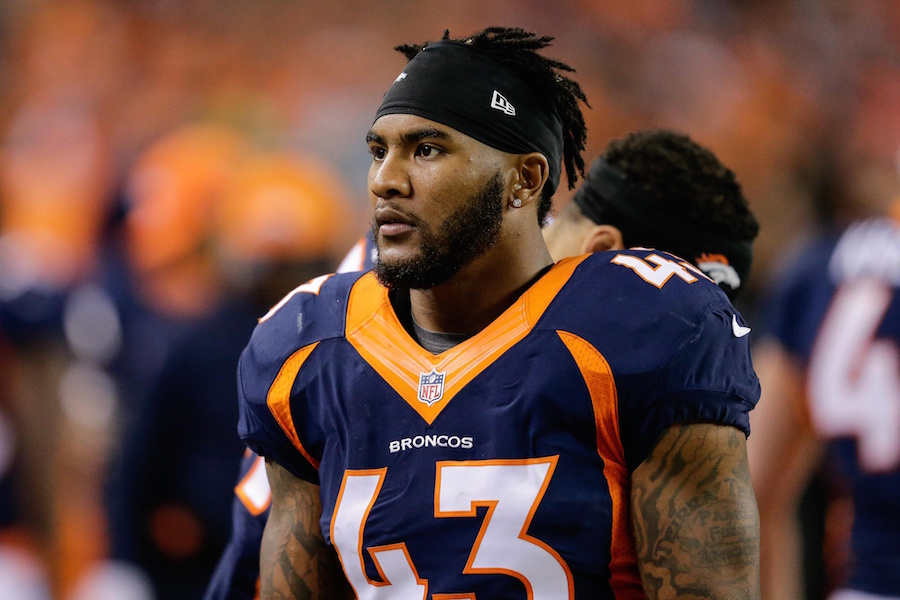 The No Fly Zone is used to putting opposing quarterbacks in a holding pattern.

Now Broncos General Manager John Elway might put the group in one of their own.

The Duke of Denver could be on the verge of shaking up the best secondary in the league. And it’d be a giant mistake.

On Tuesday morning, NFL Network’s Ian Rapoport dropped the NFL equivalent of a ‘Woj Bomb’ – this one caught a lot of eyes.

One veteran name to watch: #Broncos Pro Bowl S TJ Ward. The team has received calls & had trade conversations about him, I’m told.

T.J. Ward, Chris Harris Jr., Bradley Roby, Darian Stewart and Aqib Talib have remarkable chemistry. Hell, just check out the soon-to-be-released September issue of Mile High Sports Magazine and you can read about the super-tight unit the five of them have become.

Yes, Ward is a free agent after the season – but aren’t the Broncos interested in winning now, and from now on? That’s a mantra Elway has preached.

But if winning now is truly the goal, then trading Ward in the next few days doesn’t add up. Especially because Rapoport went on Altitude 950 yesterday afternoon with Marc Moser and said the Broncos could probably get “something like a mid- to late-round pick” back for Ward.

Ward is still relatively cheap, owed just $4.5 million this season, and the Broncos already have nearly $10 million in cap space. If Denver decided to make this move in, say, March it would have made sense to clear the space to help land a big-name free agent. At this point in the calendar though, everyone who deserves to get paid $10-plus million has already been paid. There’s no one on the market for Elway to spend that money on.

Surely this must just be a case of the Broncos taking calls, but telling teams, “Thanks, but no thanks,” right?

Per source, Broncos are actually making — not receiving — calls about a trade of S T.J. Ward.

So, not only is Elway taking calls, he’s actively looking to part ways with Ward – at least if Florio is to be believed (and there’s no reason not to trust him).

There are a few possible reasons why Elway and the Broncos have changed their tune on Ward, but all of them have rebuttals.

If Denver is just trying to dump Ward’s salary – then let’s call it what it is – it’d be a cheap move. For a team already well under the cap, that explanation doesn’t fly.

If the Broncos are mad Ward and his agent aren’t open to negotiating a possible extension, and this is a form of hardball, what’s the incentive to make dirty laundry public? Antagonizing an already tender situation isn’t the best way to do business.

Finally, if Elway simply wants Justin Simmons and Will Parks to play more, then he’s falling in love with potential instead of production. There’s a reason Simmons and Parks are referred to as the “Baby No Fly Zone.” For now, both second year players are still just babies – at least when it comes to service time in the NFL.

Each guy should be a good player in the league one day, but moving on from a proven commodity in Ward with just one year left on an affordable deal would be bizarre.

Ward made the Pro Bowl in 2013, ’14 and ’15. He’s consistently good for 70-plus tackles and a few forced turnovers every season. Oh and, by the way, wide receivers cringe any time he’s in the area; he’s arguably the most feared safety / hitter / tackler in the entire world.

The Broncos’ locker room was, by many accounts, fragile a year ago. The offense and defense had their dust ups, as many on Ward’s side of the ball were frustrated by the lack of points produced by Trevor Siemian’s bunch.

New head coach Vance Joseph might deal with more of the same this year if the offense doesn’t score, and the last thing he needs is a ticked off No Fly Zone if one of their key members is traded. I don’t know about you, but I wouldn’t want to tell Talib, Harris and Stewart a fellow member had been moved.

The No Fly Zone is arguably the most stable unit not only on the Broncos, but in the entire NFL.

John Elway grounding them now would get 2017 off to a turbulent start.