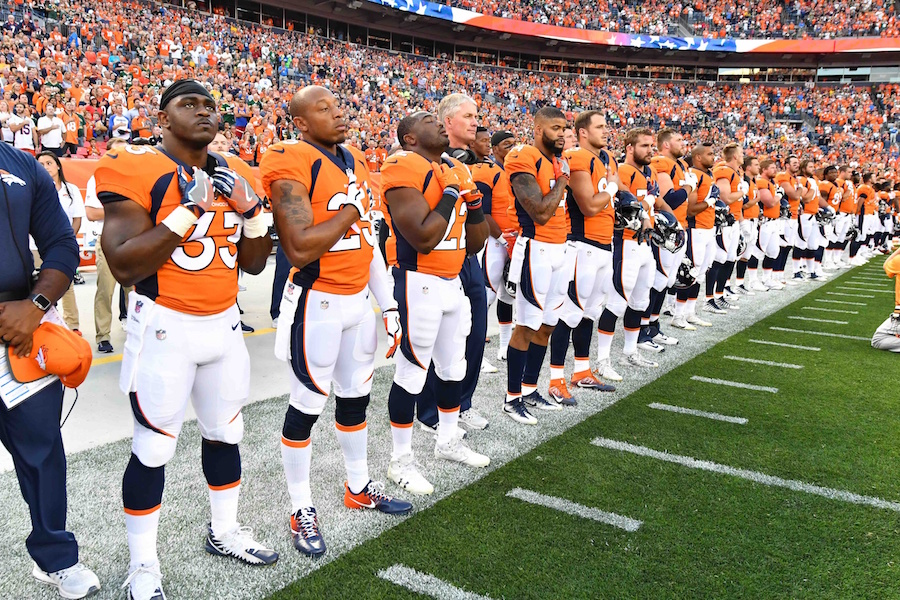 At a CU football game last year, during the National Anthem, I looked up into the crowd and spotted two people sitting alone. They were both black, in their forties, and I found myself looking at them as the band played and questions rushed through my mind.

What must it be like to sit in a stadium where everyone else stands?

What would you have to believe to put yourself in that position?

What precedent in our country allows you to do this?

Will I rush over to defend them if they are harassed?

It was this last question that gave me pause. Although no one approached them, I wanted to think that I would have raced over to them if they had been spotted. It wasn’t until later that I knew why I felt that way.

Dissent, in America, is still patriotic.

Elementary school in the 1990s, after Desert Storm and before September 11th, taught the recognition of past American struggles. In a time of relative peace we instead looked into the past to find our enemies.

Every February this idea turned to Black History Month. I remember a children’s book about Ruby Bridges integrating an all-white school in New Orleans. I remember reading “The Watson’s Go To Birmingham” around the Birmingham church bombing. I remember talking about Rosa Parks and Dr. Martin Luther King Jr.

The enemy America defeated was racism.

The method for defeat was dissent.

The sports moments held up too. The greatest example is “Remember the Titans,” the Denzel Washington/Disney version of the integration of a divided town brought together by the high school football team. The differences melt away as the team comes together. It’s a tidy representation of the civil rights era.

Other sports moments held up in the movement. Muhammad Ali refused to serve in the military because of his religious beliefs. Two raised fists at the Olympics, Tommie Smith and John Carlos on the medal podium. Jackie Robinson having the courage to not fight back when people in baseball tried to get a reaction out of him.

One thing left out of all of these stories was how unpopular the decisions were in their day. FiveThirtyEight ran a story this week about this idea. Sixty-three percent of Americans viewed Dr. Martin Luther King Jr. unfavorably in 1963. That’s higher than people today who believe that not standing for the National Anthem is unpatriotic according to another poll going around. King’s popularity today is 96 percent.

I know now that the picturesque version of civil rights was just another point on the curve of progress towards justice and quality. The enemies, prejudices and complications in our society have not ceased. There is no children’s book that holds up to the social upheaval we are facing.

The complications of the anthem protest exponentially increased this week with President Donald Trump’s comments. So did the thoughtful dialogue around the conversation, which I collected as I thought about this column.

I don’t have one succinct thought on it — there is no tweet that sums up what all of this means. No one on Facebook has been completely right with a status. Social media again has failed to aid us in our search for understanding — instead, it divides us.

So today, in a single sports column found on the Internet, I cannot speak for the over 320 million Americans faced with this issue. This is a conversation of nuance that requires critical thinking and the ability to realize that some people disagree with you. I understand why there are many sides to this story; there just isn’t a 240-character summation to put online.

At some point, our national politics become too noisy to ignore in any realm, even fantasy ones like football and the Internet. I have never tried to separate sports and politics because I always see one reflecting the other. Still, I understand why some would want to leave the politics out of sports. Unfortunately, we are again living in a moment where politics collides with all aspect of American life. We must accept this moment.

When the National Anthem plays, I often take the time to reflect on the many shades of patriotism. Sometimes the patriotic words of our forefathers come back to me from the Declaration of Independence. The ideas held within it were dissent, in order to create a country where different freedoms and opinions could be held up without fear of persecution.

At a school like CU, which is much less diverse than my Denver high school, sometimes that dissent takes courage. On an NFL football field, with millions of people watching, such dissent can cost you your job. In life, each American makes his or her own choice. That’s your right as an American.