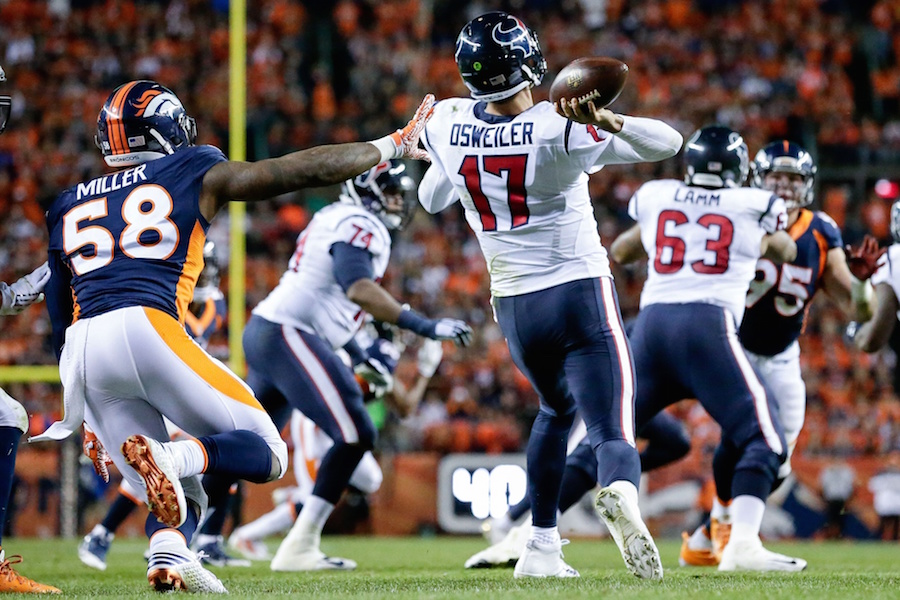 The big story going into the Monday night game between the Houston Texans and Denver Broncos was, of course, the return of Brock Osweiler to the Mile High City.

Osweiler spent the first four years of his NFL career in Denver, but things ended sourly when he was benched in the regular season finale last year. Of course, Peyton Manning was reinstalled as the starter, and the Broncos rolled to their first Super Bowl victory in nearly two decades.

That didn’t sit particularly well with Brock, who had played well in relief of Manning, winning six of his eight starts.

When it came time to sign available free agents, the Houston Texans swooped in with a four-year, $72-million deal for Osweiler, leaving the Broncos, and their fans, feeling a bit jilted.

But now that we’ve had some time, I think we can all agree the split was best for both parties.

Brock Osweiler felt he had played well enough to remain the starter in Denver. He also had a chance to earn some serious money. He did what many of us would do: He took the money and ran.

But the Broncos had something else to consider: Paying Von Miller.

They had seen some flaws in Brock’s game, and the Broncos felt like they could probably find an adequate replacement. They needed space to craft a six-year contract worth over $114 million dollars for the most destructive defensive player in football. And unlike Brock, he’s earning that money.

On Monday night, we saw Von’s seven-game sack streak end, but he still managed three solo tackles and a tackle for a loss, not to mention a slew of pressures that forced Osweiler to get rid of the ball early. On the season, he has 7.5 sacks and is a threat to change the game on literally every play that he is on the field.

Osweiler, on the other hand, looked like a flawed quarterback.

He finished Monday night with a 60.1 quarterback rating, managed just 131 yards with no touchdowns, and had one very odd fumble.

So far this year, he has eight touchdowns and eight interceptions, making Texans fans wonder if they really found the right guy for the job.

But let’s talk about the quarterback that is playing in the orange and blue. Trevor Siemian wasn’t spectacular, but he sure looked like the right quarterback for this team right now.

He was 14 of 25 with 157 yards and a touchdown. He was not sacked, and he had no turnovers, or major mistakes. Siemian gave the Broncos exactly what they needed on Monday, and walked away with a 27-9 victory.

It looks like both sides got what mattered to them: Brock Osweiler got a hefty payday, and a chance to start, while the Denver Broncos retained a powerful defense and found a quarterback that they feel is a very good fit for Gary Kubiak’s system.

As we saw last year, that combination just might be enough to contend for another Super Bowl.

The Broncos have officially moved past Brock Osweiler. And based on what we saw on Monday night, it was for the best.