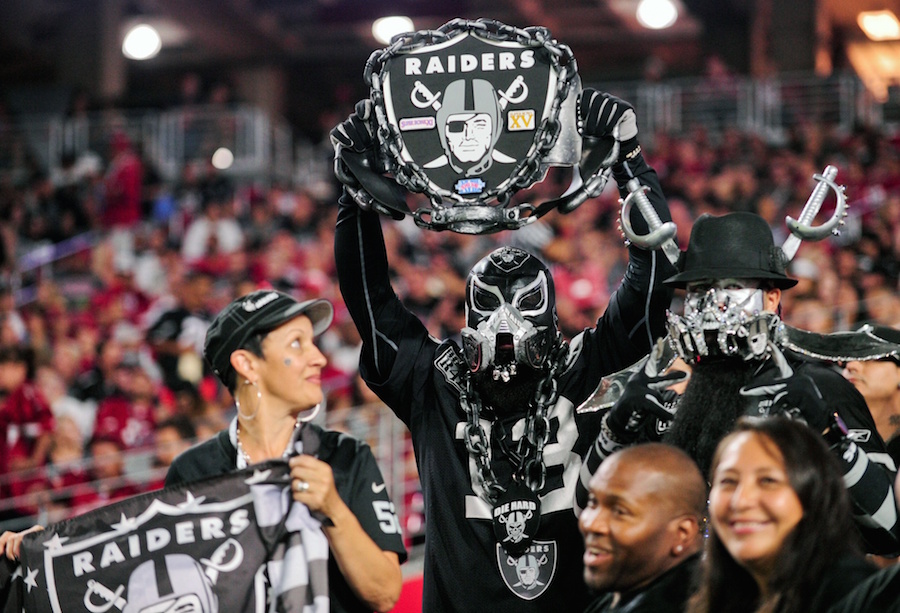 You know how sometimes you just have to get something off your chest, even if there’s a chance you’ll regret it down the road?

That’s where I am.

So screw it – here goes nothing.

The Oakland Raiders don’t scare me one iota.

The current AFC West leaders and No. 1 seed in the conference are a fraud. Oakland won’t win the division, and unless they luck into playing Houston, they won’t win a playoff game, either.

The Raiders might be a Super Bowl contender down the road if Derek Carr continues to develop, but this season will end with a whimper for Mark Davis’ boys.

Oakland will be one and done come January, and the mirage will be revealed. Just win, baby? Not this year.

There are two threats in the AFC to win the Super Bowl, and four in the entire NFL. In no particular order it’s Denver, New England, Dallas and Seattle who have a chance to hoist the Lombardi Trophy this season. Oakland is on the outside looking in.

First, you don’t need to go much further than their head coach, Jack Del Rio. He’s made some gutsy decisions this season, many of which have paid off, but it’s hard to shake the feeling of what that guy did in Denver and to Denver.

In 2014, Del Rio’s last year at the helm as Broncos defensive coordinator, the team finished 17th in points allowed. Their 25 takeaways ranked 16th in the NFL and they notched a respectable, but not outstanding, 41 sacks. In other words, the group was in the middle of the pack.

That defense was led by the likes of Aqib Talib, Von Miller, Chris Harris Jr., T.J. Ward, DeMarcus Ware, Brandon Marshall, Derek Wolfe, Bradley Roby and Sylvester Williams. Or, you know, the same guys that played defense for the Broncos in 2015 and remain the core of the team.

What a difference getting vanilla JDR out of Denver made.

Last year, the Broncos ranked fourth in points allowed and seventh in takeaways, while also notching 52 sacks. And for good measure they gave up the fewest total yards in the entire league. With a historically good playoff performance, not only was it universally agreed upon Denver had the best defense in the NFL, but also one of the all-time greats.

From middle of the pack to all-time great, with very few changes other than jettisoning their mediocre defensive coordinator, and it’s clear maximizing talent isn’t one of JDR’s strengths.

Throw in the fact Del Rio was seen mucking it up with Raiders owner Al Davis before a game between the two teams in Denver, with the idea that he may or may not have lined the Raiders job up before a playoff game, and the guy should be the ultimate villain in the Mile High City, not only for his poor coaching but questionable ethics as well.

Still, the Raiders won’t flame out down the stretch just because of Del Rio – the schedule gets significantly tougher.

Oakland hasn’t played a single AFC West road game yet; those will make up three of their final six contests. Throw in games with the defending NFC Champion Panthers, sneaky tough Bills and the enigmatic Colts and it’s easy to see the Raiders finishing 3-3 or 2-4, barely hanging on to a wild card spot.

And finally, and this is a pure gut feeling, remember who we’re talking about here: The freakin’ Raiders.

This is a team that went a combined 62-146 the last 13 years, while never finishing higher than third in the division. They haven’t sniffed the playoffs since 2002 and in their last postseason game lost the Super Bowl in blowout fashion by 27 points. There are teenagers roaming this Earth who weren’t even born the last time Oakland played meaningful football in January.

The saying in the financial word is “past performance is not necessarily indicative of future results,” but until Oakland proves they can win when it really counts, they’ll always be the same old Raiders.

Between a lack of trust in Jack Del Rio, a brutal schedule the rest of the way and the stink that is the Raiders, Broncos fans and the rest of the NFL have nothing to worry about.

When Oakland bows out in Pittsburgh on Wild Card Weekend, their 8-2 start will be a mere footnote of the 2016 NFL season.

And with that off my chest, let’s hope it’s not something I regret.

Then again, betting against the Raiders the last decade-plus has been a pretty safe proposition.