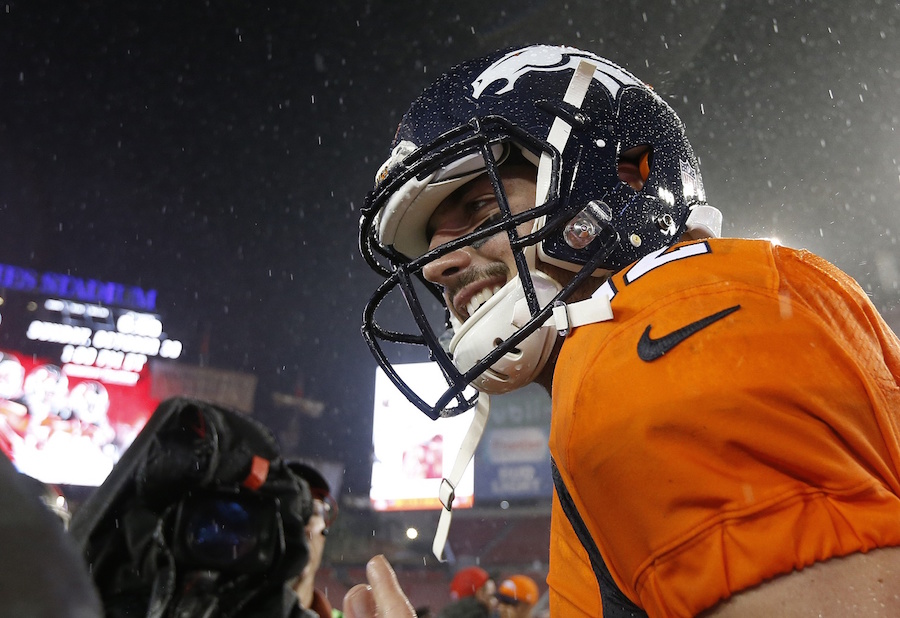 On paper, Broncos fans should be worried about the high-flying Atlanta Falcons offense this weekend.

Good thing you’re not reading this on paper.

The Broncos are going to shut down Matt Ryan, Julio Jones and the rest of the Falcons and hold them to 21 points or fewer.

Talib and the Denver defense is on fire to start the season, a streak that dates back to last year’s playoffs. In seven straight games, this group has been unbelievable.

Time to bust out the calculator. Or even just a pen and paper – the math isn’t hard.

In their last seven contests against seven of the NFL’s top-half QBs the Broncos defense has given up three touchdown passes and one rushing touchdown.

Translation: The Broncos don’t care who the QB is right now; they’re going to kick his ass.

And top receivers won’t find much success, either.

Sunday won’t be any different.

Yes, Matt Ryan leads the league in passing yards through four weeks with 1,473 and touchdowns with 11, and yes, Julio Jones is tops in yards with 488, but it doesn’t matter.

In Week 2 folks asked how the Broncos were going to shut down T.Y. Hilton. 41 yards later, they did.

In Week 3 doubters asked how Denver could contain A.J. Green. 77 yards later, they did.

In Week 4 skeptics wondered how the secondary could contain Mike Evans. 59 yards later, they did.

And while Atlanta keeps getting better on offense through their first four games (24, 35, 45 and 48 points, respectively), the stock market crash is on the way.

The dirty birds are about to run into the side of a building. The Broncos defense is a big, thick pane of well-cleaned glass.

There are no holes.

The defensive line, anchored by Derek Wolfe, Jared Crick and Sylvester Williams has been as solid as stone, minus the occasional QB scramble.

The outside linebackers with Von Miller, DeMarcus Ware, Shane Ray and Shaquil Barrett have lived up to the hype and then some.

The inside linebackers have been tackling machines, with Brandon Marshall, Todd Davis and Corey Nelson seemingly not missing a beat after Danny Trevathan left.

And the secondary remains the league’s best. Talib, Chris Harris Jr., T.J. Ward and Darian Stewart have been nearly flawless. The no-fly zone thing is legit.

So why, if Newton (x2), Roethlisberger, Brady, Luck, Dalton and Winston couldn’t figure this defense out is Ryan suddenly going to? Most would argue he’s not as good as any of the signal callers (Winston excepted) listed above.

Let the skeptics be skeptical and let Vegas continue to lose money on this defense (they’ve covered in all four games), because for now there’s no reason not to keep riding the wave.

Doug Ottewill wrote eight days ago these Broncos might go 19-0. A lot of people thought he was kidding. I’m not so sure they shouldn’t warm up to the idea. Other than a meltdown at QB, it’s hard to figure out how this team loses.

On paper Broncos fans should worry about the Falcons this weekend. Hopefully after scrolling through this on a screen, your mind’s been changed.

The Broncos are rolling toward Super Bowl LI in Houston.

That bus isn’t slowing down for the Atlanta Falcons.