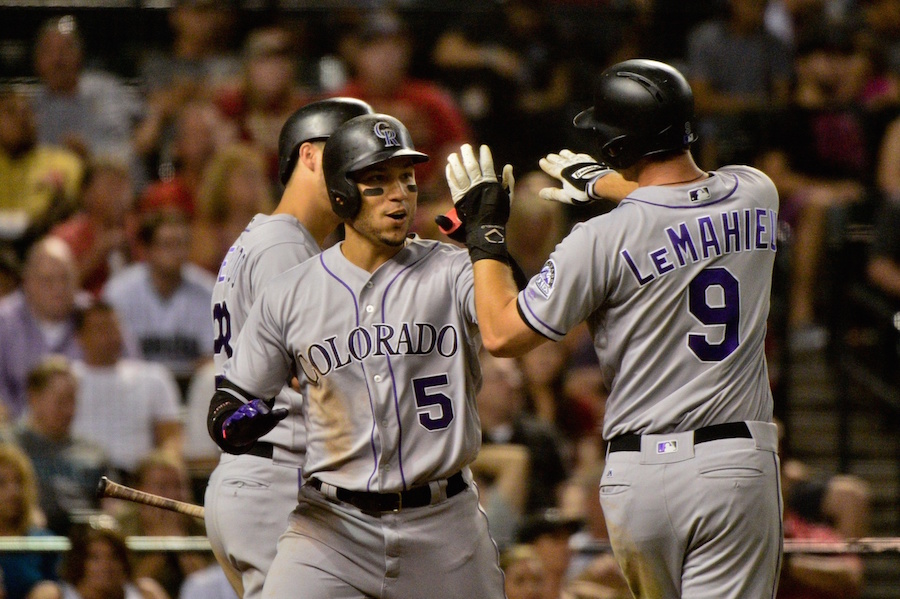 The offensive slump that mired the first three and a half months of Carlos Gonzalez‘s 2017 season may still affect his overall numbers when the season comes to a close, but it seems like a distant memory after Tuesday night’s monster performance by the sweet-swinging lefty.

Gonzalez homered twice – a pair of two-run shots – in Colorado’s 4-2 victory over the Arizona Diamondbacks at Chase Field.

Arizona’s own slugging right fielder, J.D. Martinez, opened the scoring with a monster home run off Rockies starter Jon Gray (8-4, 3.95 ERA) in the second inning. Gonzalez would counter with a two-run shot off Taijuan Walker in the third.

Gray worked into some trouble in the bottom half of the frame, loading the bases with Diamondbacks and no outs. Jake Lamb drove a ball to the warning track in left to score Walker, but Gray worked some magic and forced Paul Goldschmidt to line into a double play to end the inning.

Things would stay knotted at two into the seventh where Gonzalez struck again. After Andrew Chafin retired Charlie Blackmon, David Hernandez (2-1, 5.14) gave up a base hit to DJ LeMahieu. Gonzalez followed with his second two-run shot of the night.

Gray pitched a 1-2-3 seventh to close out a sterling night for the young right-hander. He allowed just two runs on seven hits, striking out 10 Diamondbacks along the way. Scott Oberg pitched 1.1 innings of relief, allowing a leadoff double in the ninth. Chris Rusin retired the only two hitters he faced to earn his second save of the year.

Since July 18, Gonzalez is hitting .324 with 22 extra-base hits and 30 RBI. He’s been especially hot in September, hitting .438 with four home runs and seven doubles.

The Rockies have now won six straight games against NL West opponents above them in the standings. They are just three games behind Arizona for the top Wild Card position, with a chance to take two more from the Diamondbacks through the remainder of the series. They maintained a 3.5-game lead on St. Louis and a four-game lead on Milwaukee for the final Wild Card spot with the win.