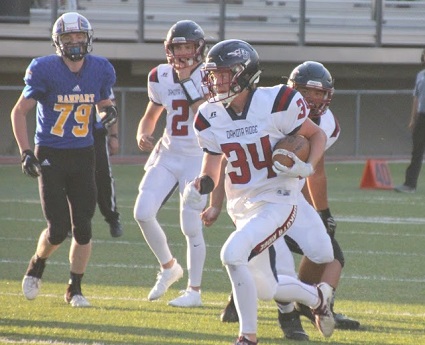 Mile High Sports is pleased to be partnered with Colorado Preps to bring you the latest high school news, scores and analysis from around the state. Listen Friday nights at 9:30pm for the Colorado Preps Scoreboard Show on Mile High Sports Radio (AM 1340 / FM 104.7) Be sure to keep up with the latest here and at ColoradoPreps.com. Above photo courtesy of Dakota Ridge Schools.

Traditional powers along with up and coming programs headline our 4A Football preview for Week 4. The Pine Creek – Valor Christian contest draws most of the attention but the list of quality matchups is a bit deeper than just the battle of Eagles.

The two sets of Eagles have combined for 11 state championships since 2009. Valor Christian has eight crowns since becoming a varsity program in 2009 while Pine Creek grabbed three 4A titles between 2013-16. Valor Christian leads the all-time series 3-0 including a 28-7 decision a year ago.

The game features two of the best running backs statewide in Pine Creek’s David Moore III and Gavin Sawchuck of Valor Christian. Moore has been the main offensive threat for Pine Creek since his freshman season and is less than 600 yards away from 6,000 for his career. Through wins over Rio Rancho NM and Doherty this year, Moore has produced 390 yards and five touchdowns. Sawchuck is just a sophomore but also became a household name during his freshman season where he gained 695 yards on just 79 carries. He picked up 170 yards on 29 carries in last week’s quality win over Pomona (17-13).

Both clubs also have solid QB’s that give their offenses plenty of balance. Valor’s Cole Bott completed 9 of 15 passes for 142 yards and a TD to Sawchuck against Pomona. Pine Creek’s Gavin Herberg has just 14 completions this year but nine have gone for scores including four to Eddie Kyle.

Both teams were ranked #1 to begin the season and Pine Creek remains in the 4A top spot. Valor has dropped to third with an out of state loss but they still received five first-place votes this week.

The key in this one is Chatfield’s ability to slow down the running game of Fruita Monument. And their defense improved quite a bit from week two to week three. In a win over Rampart, the Chargers gave up 305 yards on the ground but reduced that number to just 130 in last week’s win over Brighton. Fruita’s running game is headed in the opposite direction. They collected 187 yards in an opening loss to Pueblo West but upped that mark to 292 yards in the win over Grand Junction Central last week.

Denin Luster led that effort with 118 yards and a touchdown. QB Kade Bessert added 111 yards and scored three times. Ethan Cox was an effective third threat with 63 yards and a fifth TD on the ground.

QB Matt Canino triggers the Chatfield offense. Over the last two wins, he’s thrown for 314 yards and three TD’s. He added 88 yards on the ground against Brighton.

With their unbeaten start, Silver Creek has already matched their win of 2018 when they finished at 2-8. The Raptors have not made the playoffs in Class 4A since joining the division in 2017. A win over Windsor gets them closer to ending that dry spell.

Windsor, which topped Silver Creek in the 2012 Class 3A state finals, is a missed two point conversion away from a 2-0 start. After beating Vista Ridge 24-14 in their opener, the Wizards rallied late but fell short to Ponderosa 24-23 last week. Coach Chris Jones’ club scored a late touchdown and went for the win on a two-point conversion try but were turned away.

Defense has the led the Silver Creek resurgence; forcing nine turnovers in two games. Eli Hubert has two interceptions and returned one for a touchdown. He’s also picked up a fumble. Offensively, the Raptors have generated only 500 yards of offense in two games but Carter Closson has been very effective. He’s completed 23 of 38 passes for 282 yards and five touchdowns.

That defense will be tested against the Windsor running game which is always among the best in Colorado. They ran for 454 yards against Vista Ridge and still managed 372 in the loss to Ponderosa. Tyler Shields (301 yards), Kenny Sleeth (190) and Wyett Ekeler (142) are the top ball carriers. Last year, the Wizards picked up 332 yards rushing in a 40-7 win over Silver Creek.

2019 marks a much better start to the season for Dakota Ridge. Last year they fell to both Rampart and Monarch but knocked off both the Rams and Coyotes this year in building a 2-0 start. Balance on offense has been crucial as the Eagles have 285 yards rushing and 279 through the air. Sean McNamara, with 210 yards, is the first option on the ground and he has all four rushing touchdowns. Ben Gultig is responsible for all the passing and has tossed three touchdown passes including two to Mason Galbreath.

The Eagles face a Vista Ridge defense that has forced four turnovers and blocked a punt this year. Joshua Romain has two of the interceptions. Tyler Clark (11), Jaleen Young (9) and Ryan Poolman (8) are the top tacklers.

Offensively, Vista Ridge is a work in progress with freshman QB Brayden Dorman getting better each game. He threw for 140 yards against Windsor and added 116 against Bear Creek with a TD pass in each. The Wolves lost to Windsor 24-14 and edged Bear Creek 10-7.

Following a winless 2018 and just five combined wins over the past three years, Liberty’s 2-0 start is one of the pleasant surprises of the season. They’ve beaten Sierra 49-0 and Pueblo Centennial 21-8 this year and while both those programs are struggling a bit, the Lancers lost to both opponents by a combined 46 points a year ago.

Daucin Dvorsky is hitting 68 percent of his pass attempts; throwing for 329 yards and three TD’s. Mussa Pena is his top target with 10 receptions for 132 yards and two scores. Malachi Salus has nine catches for 110 yards and a score. The running game has totaled 428 yards through two games including 197 from Elias Alexander.

Grand Junction has sandwiched lopsided wins over Palmer (64-20) and Grand Junction Central (50-14) around a tough loss to Montrose in week two. Their key is the running game. The Tigers ran for 464 yards with eight yards a carry against Palmer and totaled 382 yards with 10 yards an attempt against Central. Against Montrose, the Tigers had just 25 attempts and managed just 138 yards.

Other Games to Watch

Both clubs are coming off difficult losses. Brighton was taken out by Chatfield 42-10 last week while Skyline has had two weeks to chew on a frustrating 42-14 loss to Mead back in two. QB Chase Silva keys the Falcons offense. He’s thrown for 431 yards and seven scores in two games. Grayden Bridwell leads all receivers with 14 catches and four TD’s. The running game is still looking for a leader after losing all-state standout Jeremy Hollingsworth to graduation.

Despite the 2-1 start, Brighton’s offense is still looking to find it’s a groove as it learns a new attack under first year coach Jeff Giger. They’re averaging 3.8 yards per carry on the ground but has not gained more than 178 yards in any game this year. Defensively, Justice Kanetz leads the group with 29 tackles.

Both teams rebounded from opening losses to score quality wins in week three. Greeley West fell to Arapahoe 14-13 but bounced back to drub George Washington 48-26. Monarch came up short to Dakota Ridge 24-7 in their first game but rallied past Rampart 42-21 last week

The Coyotes scored 29 points over the second and third quarters vs Rampart. That turned a one point deficit after one quarter into a 14-point advantage (35-21). Coach Phil Bravo’s team churned out 280 yards on the ground; getting two touchdowns apiece from Keiran Singh and Ryan Shaugnessy.

West has not posted statistics from their win over George Washington but they collected 182 yards rushing against Arapahoe.