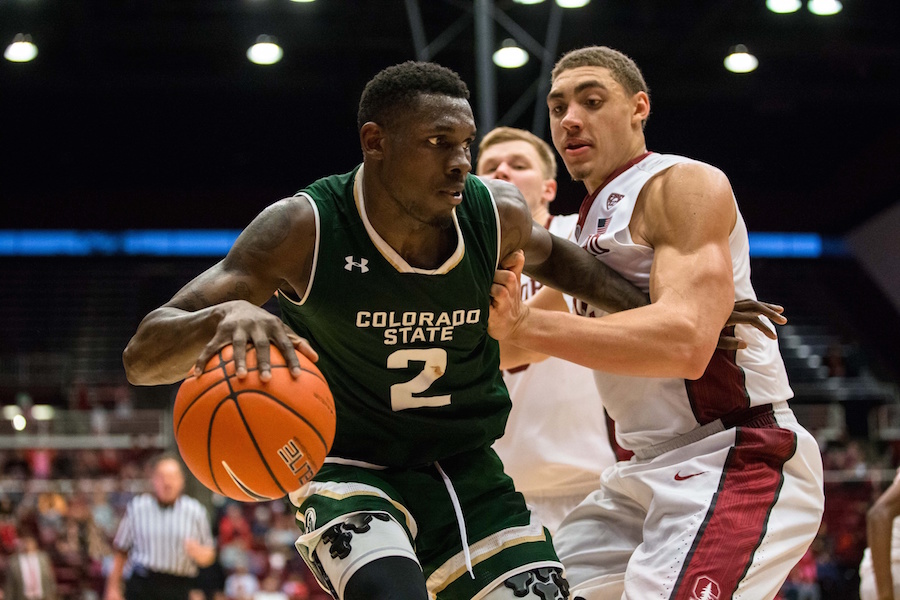 The 2016-2017 season has been anything but normal for the Colorado State men’s basketball team.

With only 10 games remaining until the Mountain West tournament, the Rams have only played at full strength eight times.

To the Rams, full strength means something a little different than to other teams in the Mountain West. Colorado State went the first nine games of the season without point guard Gian Clavell before the university finished their investigation of an alleged domestic dispute that led to Clavell’s Nov. 9 arrest.

The Rams then had the luxury of their full 10-man roster at their disposal for their next eight games before the news broke that junior college transfers Che Bob, Kimani Jackson and Devocio Butler would be academically ineligible to compete during the spring semester.

In preparation, Colorado State head coach Larry Eustachy began cutting the trio’s minutes in the month leading up to the suspension. The Rams also added Juan Sabino II, a former member of CSU’s track team, to help fill out their thin roster.

Having only seven players on scholarship would be the perfect excuse for a team to throw in the towel on the season, but not these Rams.

“I’m built for this,” Clavell said following the Rams’ 81-72 victory over the San Jose State Spartans on Wednesday night. “We have a staff that’s got us built for this. Pretty much, if you think about it all you have to do is eat, rest, sleep.”

Clavell is no stranger to playing large amounts of minutes in a night. Wednesday night’s matchup against the Spartans was his second straight game in which he played 40 minutes. He finished the night with 24 points on 10 of 19 shooting and grabbed 12 rebounds in the process.

“There was a point I think in the first half that I was like, extremely tired,” Clavell said. “Other than that I felt good during the whole game. I wasn’t breathing super hard. I just felt good.”

The redshirt senior wasn’t the only player that had to go the distance. Sophomore guard Prentiss Nixon also logged 40 minutes in his 17-point performance on Wednesday night.

Senior forward Emmanuel Omogbo has also had to pick up the slack that came along with the shrunken team. Since the team was forced to sit Bob, Butler and Jackson, Omogbo’s minutes per game have increased from 29.1 to 33.5. Omogbo has remained in the zone over the four-game stretch. His 12-point, 11-rebound performance on Wednesday out marked his third-straight game with a double-double and his 11th on the season.

Omogbo’s numbers likely would’ve increased if he’d managed to escape foul trouble. He fouled out with just under four minutes to play in the second half. Omogbo didn’t get his first rest until six minutes into the second half.

“The fouls are going to get us one night,” Eustachy said. “That’s what happens when you’re playing with such a thin roster.”

Fouling out is just one of the things the Rams have to worry about moving forward with a small roster. Practice is another thing.

“We can’t practice as much because what if somebody steps on an ankle?” Eustachy asked.

Every time the Rams take the court with seven players they are rolling the dice, and while they’re managing to keep their heads well above the water in the Mountain West, they are being rewarded with invaluable experience for young players like Anthony Bonner, Nico Carvacho and Braden Koelliker.

Even if these minutes don’t immediately translate to wins, which haven’t been much of an issue so far as Colorado State currently sits at 13-8, the Rams will likely see a return on investment in the coming years.

“Nico (Carvacho) is starting to get more conditioned and play long periods of time,” Eustachy said of his young big man.

At 5-3 in the conference, the Rams find themselves in a three-way tie for third place in the Mountain West with 10 games remaining; and will go on the road to face San Diego State on Saturday.

While the increased minutes haven’t taken their toll yet, they could in the coming weeks.

With a tough stretch of meaningful basketball remaining, it’s going to be important for the Rams to remain fresh. But how?

For Clavell, the answer is simple.

“A lot of ice baths and sleeping.”