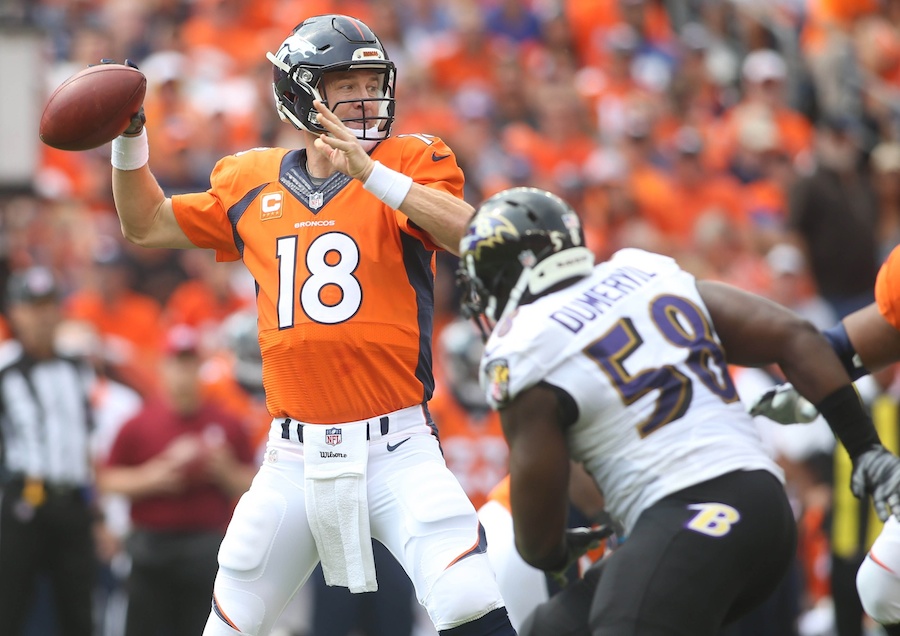 The Denver Broncos squeaked out a 19-13 win over the Baltimore Ravens Sunday, due to a marvelous collective defensive effort and spectacular field goals by Brandon McManus, yet it was overshadowed by offensive woes.

Apart from the first and last drives of the offense, the unit fell short in executing the game plan and putting points on the board. The struggles of the offense were magnified in front of the home crowd but after 24 hours the team is optimistic about performing to their expectations Thursday night in Kansas City.

“The thing that I struggled with offensively when we look at the film and our guys look at the film, they’re going to be disappointed. We had about three big plays to make in the first half that could have been good things going on, but we didn’t make those plays. A couple of times we had chances to make plays and we did not hold up protection wise,” head coach Gary Kubiak said Monday.

The Broncos began the game with a 15-play drive and ended the game with a 17-play drive. Both drives ate up more than nine minutes of clock and started or extended leads against a vaunted Ravens defense. In between those two drives the Broncos only cultivated 80 total yards. Peyton Manning threw 150 passing yards the entire evening and the running backs collectively gained only 69 yards rushing. Despite the foul numbers the players in the locker room Monday echoed their head coaches need for improvement, as well as his admission that several plays were excruciatingly close to being big plays for the team.

“I don’t think we played great obviously. We didn’t score touchdowns and I think we had only one play in the red zone but we can be a ton better. If you look at it, there were plays to be made here and there by just inches,” tight end Owen Daniels said Monday. “If you look at things like that and look at the positives and clean up what we can clean up but I don’t think anyone is panicking. If we can play like that and still get a win it is really encouraging for our team in general.”

Ty Sambrailo, the rookie left tackle who gave up one of the four Ravens sacks Sunday, played in every down in the win and despite an unfavorable -2.6 grading by Pro Football Focus (PFF), he believes that the first week is a tough one for any offense to play at their best.

“I think if you look across the league week one, offensively, it is usually a pretty tough week. As much as we go out and practice what we do and everything you don’t really find your identity until you go out and do it in a game,” Sambrailo said. “We made some mistakes and we did some things well and we need to work on it and keep improving week to week.”

The big plays Kubiak referenced in his comments Sunday night and Monday are likely the throws to Emmanuel Sanders, Demaryius Thomas and Jordan Norwood that could have scored touchdowns. Instead Manning threw an interception for a touchdown and Sanders saw a ball slip through his finger tips in the South end zone at the end of their first drive.

Pressure was constantly applied to Manning and newcomer and All-Pro left guard, Evan Mathis, placed most of the blame squarely on his shoulders Monday when he spoke to the media.

“I think that I was the worst of the group. I would have liked us to be able to run the ball a little better. Overall, we were a little inconsistent. There were some highs and lows. That kind of stuff is very valuable for it to happen where you can learn from it and not let it happen again. To be able to escape against a team like Baltimore with a win is always valuable in your experiences.”

The Broncos will face another talented defensive front in just four days. The Kansas City Chiefs had the second best pass defense in the NFL last season paired with the fifth most sacks (46). Justin Houston, Derrick Johnson and Tamba Hali are just a few players that will try to throw a wrench in Manning and Broncos plans the second straight week but according to Sambrailo the test they passed in week one will be very beneficial.

“To be able to go toe-to-toe with a physical defense like that who kind of sees themselves as a school yard bully is a good confidence builder.”

Gaining confidence after an offensive performance of that caliber is intriguing, if not befuddling, but the fact that the rare, futile results Sunday had a winning outcome seems to be the emphasized point from the team. The Broncos have so many weapons at their disposal that the offensive players believe the only way to go is up. After watching roughly three quarters of baffling ineptitude, one can only agree that they should be better, even on short rest in Kansas City on Thursday.

“You better be able to win this way in this league. It’s just too tough a league. You’ve got to have confidence as a football team, when you get one of these games, that you will find a way to win. I don’t think we ever panicked,” Kubiak said directly after the win Sunday.

With a 1-0 record panic is certainly not called for but the team and the fans will be looking for a confidence boost, accompanied by touchdowns, this week at Arrowhead Stadium. If the game Thursday goes the way it did Sunday for Manning and Co. ‘panic’ will be the most appropriate word for the situation on Friday.