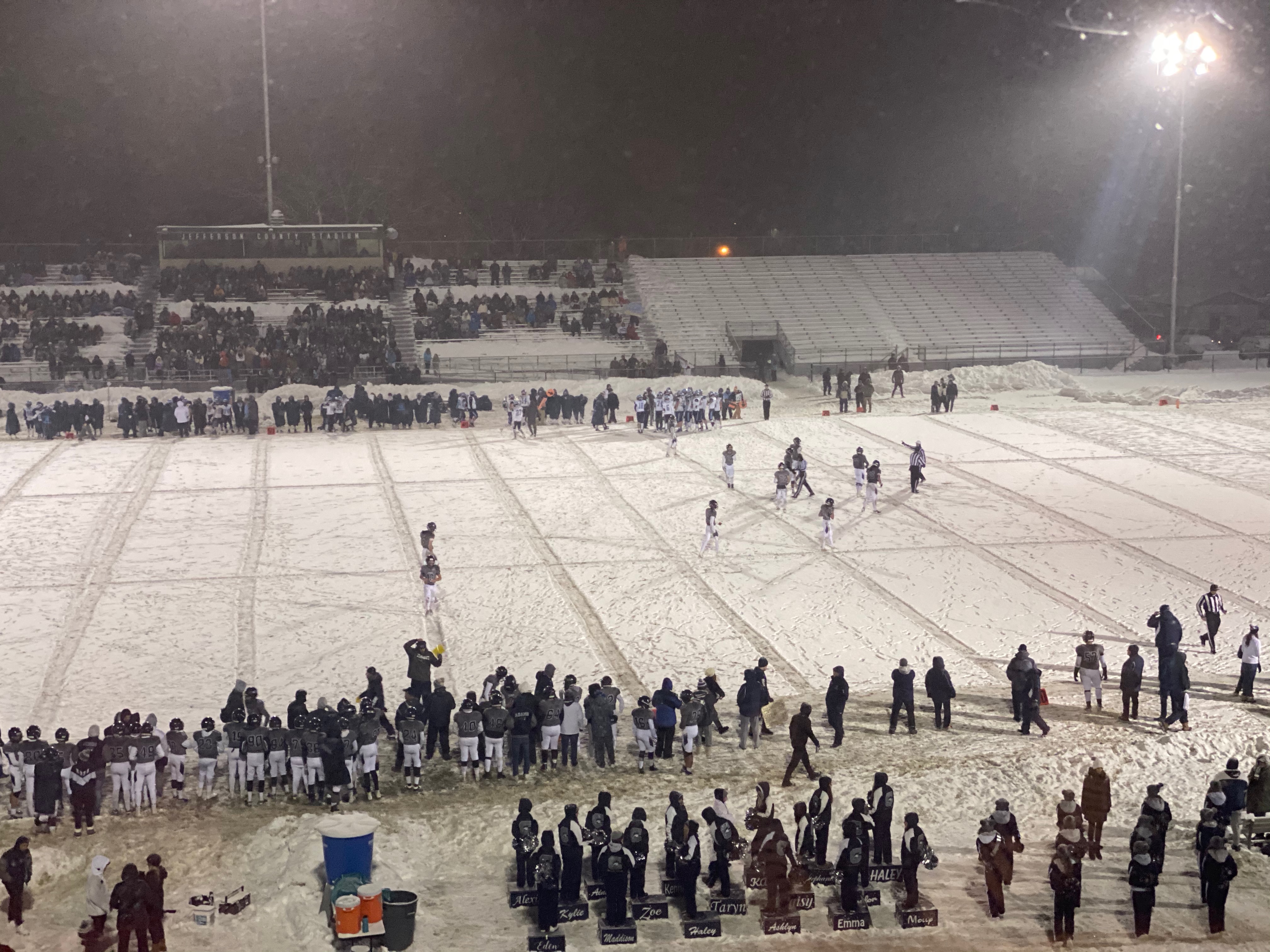 The word that Landon Jones used was divine.

“None of this is coincidence,” Jones told the group of football players in front of him, standing in the same temporary building at Columbine High School where he stood when he was their age. “Twenty years ago, it wasn’t coincidence that we found ourselves in the state championship game down 14-0, having to face adversity again, but also having to apply everything we had learned the previous six months – not just in the game of football, but the game of life.”

Jones was the star running back for the 1999 Columbine Rebels, a team that boldly delivered the school’s first championship in football just six months after the shootings of April 20, 1999. At the invitation of Columbine head coach Andy Lowry, Jones was speaking with the 2019 Rebels, a team that’s just one win away from what would be the school’s sixth state football title.

“For me it was the legacy,” said Jadon Holliday, Columbine’s quarterback, recalling what stood out most about Monday night’s conversation with Jones “This is not only us, it extends so much further.”

“It’s a matter of recognizing this is bigger than any one of you individually,” Jones had told them. “This is a part of the community.”

“To think we can go do something they did 20 years ago is really cool,” said Adam Harrington, a senior running back and cornerback for Lowry’s 2019 Rebels.

That’s the genuine, senior-in-high-school way to put it – really cool – but the young man is right: Columbine is a special place. No matter how it is, or has been, said, a 17-year old kid like Harrington and an almost-40-something like Jones both speak the same language.

“It’s above us,” Harrington continued. “It’s not just us. It’s the whole community,”

To think that both the school and community are stronger now than ever. It’s a storied place, a resilient place, a tough place, a caring place.

To think that 20-years ago this weekend, Jones’ team, just like the Rebels that will take the field at Empower Field at Mile High on Saturday afternoon, was not only lining up for a shot at a state title, but doing so against Cherry Creek High School, the state’s biggest sports juggernaut, then and now?

“That was an opportunity,” Jones explained to this year’s team, none of which were born when he hoisted the trophy. “(The 1999 championship game) was an opportunity to go out and get that 13th victory for the 13 victims.

“Here we are, coming back six months from commemorating the 20-year anniversary of (the shootings) last spring. And now six months fast forward, and here you guys are facing the exact same opponent during the first weekend of December. None of that is coincidence. That’s divine.”

Whether or not Columbine beats Cherry Creek on Saturday is perhaps not the point. Kids from both schools deserve to be there, then and now. When the ball is teed up on Saturday, it will be a football game, plain and simple. This one just so happens to be accompanied by an incredible twist – a storyline that’s straight out of a Disney movie – and there’s no doubt that another Columbine win would be divine.

But the fact that the Rebels are playing Cherry Creek in an exact rematch of the 1999 state championship is divine already. It’s a serendipitous rematch that provides a beautiful setting for the world to reflect and remember; it’s a golden opportunity to see exactly what became of the school and community that could ultimately have been defeated on April 20, 1999 – but wasn’t.

Maybe that is the point.

“This is not a coincidence,” said Columbine tackle and defensive end Andrew Lauritzen. “It’s kind of meant to happen.”

Even at 11-2 entering the title bout, Columbine – the school, the place, the people – is undefeated in every sense of the word and on the grandest of scales.

Win or lose, that’s all that matters.