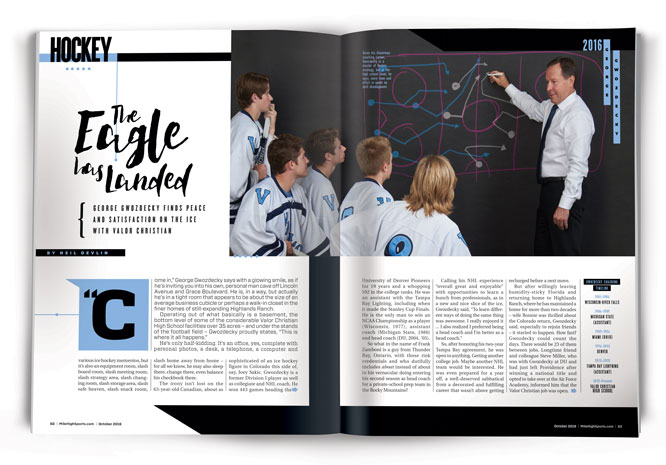 “Come in,” George Gwozdecky says with a glowing smile as if he’s inviting you into his own, personal man cave off Lincoln Avenue and Grace Boulevard. He is, in a way, but actually he’s in a tight room that appears to be about the size of an average business cubicle or perhaps a walk-in closet in the finer homes of still-expanding Highlands Ranch.

Operating out of what basically is a basement, the bottom level of some of the considerable Valor Christian High School facilities over 35 acres – and under the stands of the football field – Gwozdecky proudly states, “This is where it all happens.”

He’s only half-kidding. It’s an office, yes, complete with personal photos, a desk, a telephone, a computer and various ice hockey mementos, but it’s also an equipment room, slash board room, slash meeting room, slash strategy area, slash changing room, slash storage area, slash safe heaven, slash snack room, slash home away from home … for all we know, he may also sleep there, change there, even balance his checkbook there

The irony isn’t lost on the 63-year-old Canadian, about as sophisticated of an ice hockey figure in Colorado this side of, say, Joey Sakic. Gwozdecky is a former Division I player as well as collegiate and NHL coach. He won 443 games heading the University of Denver Pioneers for 19 years and a whopping 592 in the college ranks. He was an assistant with the Tampa Bay Lighting, including when it made the Stanley Cup Finals. He is the only man to win an NCAA Championship as a player (Wisconsin, 1977), assistant coach (Michigan State, 1986) and head coach (DU, 2004, ’05).

So what in the name of Frank Zamboni is a guy from Thunder Bay, Ontario, with those rink credentials and who dutifully includes aboat instead of about in his vernacular doing entering his second season as head coach for a private-school prep team in the Rocky Mountains?

Calling his NHL experience “overall great and enjoyable” with opportunities to learn a bunch from professionals, as in a new and nice slice of the ice, Gwozdecky said, “To learn different ways of doing the same thing was awesome. I really enjoyed it … I also realized I preferred being a head coach and I’m better as a head coach.

So, after honoring his two-year Tampa Bay agreement, he was open to anything. Getting another college job. Maybe another NHL team would be interested. He was even prepared for a year off, a well-deserved sabbatical from a decorated and fulfilling career that wasn’t above getting recharged before a next move.

But after willingly leaving humidity-sticky Florida and returning home to Highlands Ranch, where he has maintained a home for more than two decades – wife Bonnie was thrilled about the Colorado return, Gwozdecky said, especially to rejoin friends – it started to happen. How fast? Gwozdecky could count the days. There would be 23 of them between jobs. Longtime friend and colleague Steve Miller, who was with Gwozdecky at DU and had just left Providence after winning a national title and opted to take over at the Air Force Academy, informed him that the Valor Christian job was open.

Never mind Double G had never coached on the prep level. It was seven minutes from his house “and I was intrigued with what Steve told me,” Gwozdecky said. “Valor really wanted to change the perception of the hockey program, which I didn’t know existed, and had vision for all of their sports.”

The Eagles haven’t been shy about trying to land established, high-end coaches. Virtually the second that legendary Eaton baseball man Jim Danley, Colorado’s winningest coach, was available, Valor tried to bring him on board. (Danley’s now at Littleton.) Other outreach and landings have included the likes of Troy Pachner (D’Evelyn boys basketball), Dave Atencio (Dakota Ridge softball) and Jessika Caldwell (Colorado Christian University girls basketball), but getting Gwozdecky on staff was as slick as it was vital.

“George reached out to me two summers ago and I didn’t get back to him for a week or so,” Eagles athletic director Jamie Heiner said. “Then I was so excited to bring him in. He was coming off that Stanley Cup appearance with Tampa … He just shared his heart for what he wanted to do. He could really give back and mentor and coach up these young high school guys.”

Colorado has been fortunate over recent decades with various former professional athletes taking over and/or contributing to its prep programs and even a few college coaches stepping into the fray. Gwozdecky, whose Valor team was 10-9-1 over the past season and lost in the preliminaries, was viewed as a different – but welcomed – animal, particularly for a sport that has lacked attention on the scholastic level and must battle the club factor for much of the talent.

“I don’t know him well,” Cherry Creek head coach Jeff Mielnicki said. “But absolutely it helped, him coming on board. Any time you can have someone with the stature of George decide to coach on this level, and what I would call give back to the hockey community and grow the high-school sport with the passion he has shown, we couldn’t ask for anything more.

“I’m all for it. I was excited for the day it happened and am still excited.”

So is Gwozdecky. During the interview process, he asked Valor officials: “Would you even consider me?”

Said Heiner: “He changed the whole culture of our program. The kids were very excited, but anxious to see how he would be at this level.”

Everyone was able to see quickly. Especially Gwozdecky. If he didn’t know he was spoiled by coaching on the game’s upper levels, he quickly had that confirmed. Once he took the Valor job, Gwozdecky was introduced to the problems, quirks, nuances and everyday dealings of heading a team at the in-state schoolboy level. This is not the NHL. And it’s certainly not Division I. And for all of his credentials, he was a novice coming in.

“I had never coached high-school-aged kids … ever,” Gwozdecky said.

Now that he’s doing it, he can count the waves of difference.

For one, he said, the coach oversaw the best players on the planet during his NHL time, as well as many of the best up-and-comers in college. “The majority of players on a [college] roster are recruits,” he said. “I had to learn it’s not quite the same.”

For another, attendance to meetings, workouts, practice and even games may not necessarily be by hard-and-fast standards. Said Gwozdecky: “A player will come up to me and say, ‘Coach, I can’t be at practice tomorrow because I have Boy Scouts.’ And I’ll say, ‘What? You’re a hockey player.’ They’re just things I never experienced; so many other things going on in their lives.”

For another, whenever Gwozdecky required ice time during previous coaching stops in order to simply work with his players, it was no problem. It was virtually at will. On the Colorado schoolboy level? It’s whenever the Eagles can land ice time, probably at the nearby Ice Ranch, which is the case with virtually every in-state team.

“First of all, it’s if you can get ice time,” Gwozdecky said, “You’re going at 6:30 in the morning, or whenever … all of the other sports on this campus other than swimming take place on this campus.”

It’s part of the reason why Gwozdecky is working full-time at Valor, adding fundraising and possibly developing on-site ice and swimming arenas to coaching the team and shaping his players’ character.

For another, he’s coaching a high school sport that isn’t cheap. The pros and collegians lavish gear and supplies on players. In high school, Gwozdecky estimates skaters are set back $1,500-2,000 and goalies perhaps as much as $3,000.

And for still another, the prep game is slower, much smaller and commands significantly less attention. However, Grozdecky said, “high-school hockey has come so far as far as being able to build up depth and bring in quality players and have a better and better state tournament. The biggest issue right now is we want to play more games. High school hockey is giving so many kids different options. Nine years ago, the only option was to play club hockey. Nowadays, they can do travel hockey or high school hockey, and it’s really getting good.”

Gwozdecky, who called the prep game mediocre a decade ago, may be having a personal impact. Max Malinski, a sophomore defenseman at Valor Christian, said “I did his youth skates at DU for awhile and I knew who he was. It was kind of an amazing moment. It was borderline for me, to play at Valor or not, but as soon as I found out he was the coach, for sure I was going to play for Valor.”

As for dealing with younger players, “I think he does a really good job of keeping us in line,” Malinski added. “I guess high school kids can struggle with that, believe it or not.”

Former Eagles goalie Dylan Wheeler, now at Syracuse and determined to make the Orange’s club team, said he, too, was “really excited when it was announced he was our coach. He’s a really serious coach, all business, but really a great guy as well. He gets along with all of the players. I was one of the captains and with him leading it was really awesome. You can always go to talk to him about anything; he was really accessible for the players. It was kind of surprising that a guy who just coached in the NHL comes and coaches a high school team. I think coaching a high school team for him was a really new experience and he couldn’t do a lot of the stuff he wanted to, but he was able to adapt to the position very well.”

Luke Lonneman, an Eagles junior center-wing, transferred to Valor and moved past Triple-A hockey because of Gwozdecky. “The competition isn’t as good, but with Gwozdecky there it’s a better fit for me,” he said. “He’s the best coach in the area to have. He’ll develop me more in practice than in games.”

Mielnicki, whose Bruins have been champions in Colorado and nationally, said he’s thrilled about Gwozdecky and Valor being regular opponents.

“He’s on our schedule and I know he’s doing great things for that program,” he said. “I’m excited about it. George understands that for his program to flourish he has to go out and play better teams. Those are the types of coaches that we have to have. You don’t gain credibility until you step out there and compete.”

Malinski said with Gwozdecky in command the Eagles “are definitely headed in the right direction. That whole ‘Gwozdecky thing’ is bringing in a lot of talent. I think it’s pretty crazy to go from such a high level to, I guess, a lower level, but I do appreciate it a lot. Just mentoring us through our whole high school career, plus he has all of those credentials … I think it’s really cool he wanted to do this. He’s just a hockey genius and passing it on.”

After all, Heiner added, “the strongest voice in a kid’s life can be what the coach says.”

What his coach says is that he’s quite content heading the Eagles.

But you never know.

“I’m healthy,” Gwozdecky said. “I think my two years in the NHL re-energized me and I’m a better coach for it.”

Gwozdecky responded: “Yeah, I am. And it has been, I think for me, more than I could imagine.”