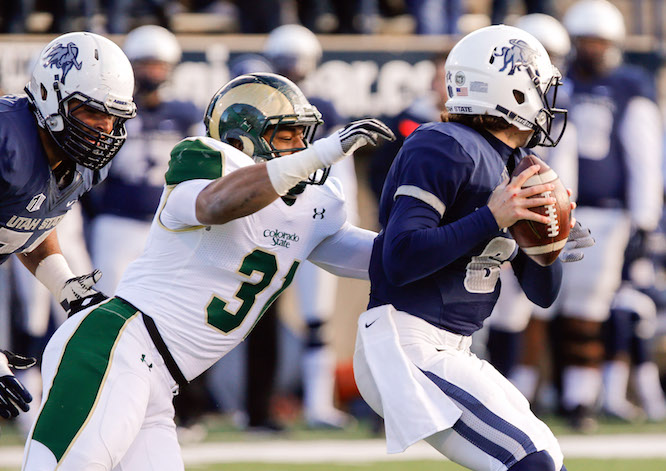 We all know that offense sells tickets, and that’s most definitely a major need at Colorado State. However, we also know that defense wins championships, and that’s something that has eluded the Rams since the glory days of Sonny Lubick. So it stands to reason that for any sort of new trophy to end up in Fort Collins, the CSU defense needs to take a big step forward.

The success of the program over the past two years, including last year’s 10-win season, has been the result of a powerful offense, led by now-New Orleans Saints backup quarterback Garrett Grayson. Even with a new QB, the same sort of production is expected again this season. Going into 2015, the Rams return a bevy of offensive weapons, including All-American receiver Rashard Higgins. New head coach Mike Bobo has promised a more up-tempo offense, designed to maximize the effectiveness of all those skill players. Most observers think the Rams’ opponents should be nervous.

But in order to replicate and even build on the success of last season, CSU will need to be able to lean much more on their defense this season, especially early on, because that’s where the experience returns. But is that a good thing or a bad thing? Even while winning 10 games a season ago, the Colorado State defense wasn’t very good. They gave up 37 points and 676 yards in a loss to Boise State. Wyoming totaled 454 yards and 31 points. San Jose State racked up 31 points and 493 yards of offense. New Mexico rushed for 301 yards Utah rolled up 45 points and 548 yards of total offense in the Las Vegas Bowl rout. For the season, CSU gave up 425 yards and 25 points per game. That’s simply not good enough to win any sort of championship.

Enter Tyson Summers, the Rams new defensive coordinator. He comes to Fort Collins from Central Florida, where he served as DC for the best defense in the American Athletic Conference. He takes over a veteran unit that has several projected fifth-year senior starters, including standouts Trent Matthews, Cory James and Kevin Pierre-Louis. When you’re breaking in a new coaching staff and a new offensive system, an experienced defense will often be asked to carry the weight.

So with that already on their shoulders, Bobo went ahead and piled on the defense when he announced the Rams would be going to an up-tempo offense that will pretty much ensure the defensive unit is on the field for far more snaps. Summers took the news as a positive – a chance for the Rams to practice daily against the style of offense that they figure to see numerous times during the season.

“I think it’s been really good, actually,” Summers said at CSU media day. “We’re going to play no-huddles eight, nine times during the year. The good thing is you’re not having to walk in during the week and trying to teach it and everyone’s in disarray and don’t know how to handle the tempo. What it’s done is make us get in the position we should have already been in.”

So what can CSU fans expect to see from the new-look Rams defense?

“What I hope you’ll be able to see us play is play really hard,” he noted. “There are a lot of variables that you can’t control – how tall they are, how fast they are. But what you do want to see is all the things that aren’t talent-based. The things we can control, like guys being lined up correctly, have they got their feet in the dirt, their eyes on their keys… somebody’s not turned around looking back while the ball is being snapped.

“And when the ball is snapped, we are trying to wreck whatever we see.”

Summers moved standout outside linebacker James inside to play the middle, noting that, “If you’re going to be good, most times you’re going to be good up the middle.” The plan is for that strength to include strong safety Matthews, free safety Pierre-Louis, linebacker Joe Kawulok and tackle Justin Hansen. If they can hold up against Bobo’s version of the no-huddle in practice, Summers likes their chances when the real games begin.

“After just a few days, I’m really pleasantly surprised,” Summers smiled. “We’re a lot further along in my opinion – and I hope this doesn’t come back to bite me later on – I’m a lot more excited than I ever was in the spring. And I’ve smiled a lot more.”

While many CSU supporters are working themselves into a lather over the idea of getting invited into a “Power Five” conference (while far too many of them still spend their Saturdays watching from home or listening to the game on their cell phones from their kids’ soccer games) the real focus for the program is to take the collective next step – winning the Mountain West and perhaps getting a shot at a coveted New Year’s Six Bowl game. When that happens (in front of a full stadium), then CSU can begin to look at bigger things.