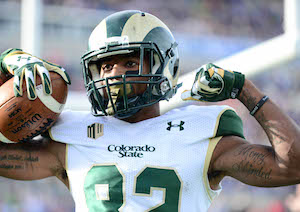 Colorado State Rams wide receiver Rashard Higgins blew up the stat sheet last season as a sophomore and was a big reason for the Rams 10-3 season.

Higgins set team records in 2014 for catches (96), receiving yards (1,750) and receiving touchdowns (17). Couple that with eight straight 100-yard-receving performances and you can start to see just how amazing Higgins season was in 2014. His 1,750 yards were tops in all of college football at any level.

ESPN.com has been revealing 20 players every day during their annual top-100 college football players for the upcoming season, and today they released players 41-50.

Being selected as a top-50 player for the upcoming college football season should serve as a increased motivation for Higgins to keep improving and while doing so, improve his draft stock along the way.

Also as the only returning Biletnikoff Award finalist, and one of just three players nationally to be named to the 2015 preseason watch list for the Maxwell Award, Walter Camp Award and Biletnikoff Award, the sky is the limit for Higgins for the upcoming 2015 season.

Sammy Mugharbil, a Mile high Sports intern and student at MSU-Denver contributed to this report