After each of the teams won their opening game, the AFC West is looking like one of the very best divisions in all of football this season. That provides quite the challenge for the local Denver Broncos.

The Kansas City Chiefs have to be the top dogs in the division until proven otherwise.

The offensive line looked somewhat improved, though that’s not saying much, and the defense showed promise too. Although they allowed the Browns to build a big lead early, and looked entirely unable to stop them, the Chiefs’ defense quickly pivoted and got the necessary stops for Patrick Mahomes and Co. to come roaring back.

This Chiefs team still might be the worst of the Patrick Mahomes era, but that still makes them a legitimate Super Bowl contender (if not front-runner) and none of the other teams in this division are on that level yet. Plus they beat another major contender in the form of the Browns, so there’s no doubt they’re

The Broncos debut went just about as well as one could have hoped. The 27-13 win was dominant, and feels even more so when you consider the offense could have put up at least 30, if not for a questionable ruling on a Logan Ryan fumble recovery. Meanwhile the defense held New York’s offense to just seven points, until a truly meaningless touchdown on the final play of the day.

However, the Giants don’t present much of a challenge. This win was mainly impressive for what it said about the Broncos’ biggest concern entering the season, starting quarterback Teddy Bridgewater.

Bridgewater played completely out of his mind in what was one of the best quarterback performances of the week, any way you slice it.

If the Broncos get that level of play from Bridgewater, or even acceptable play from the quarterback position, they’re a wild card team who could potentially make some noise in January.

The Brandon Staley Era is underway in Los Angeles, and it’s off to a strong start.

It’s hard to split up these three teams behind the Chiefs, as all had such strong weeks. The Chargers find themselves sandwiched between the Broncos and Raiders because, although they didn’t alleviate their biggest concerns ahead of the 2020 season, they didn’t pile onto them like the Raiders either.

That major concern was the regression of promising young quarterback Justin Herbert, who played pretty well in his new system against the Washington Football Team. His performance definitely wasn’t quite as explosive as we saw last year, but it was still a really strong showing against a top-notch NFL defense.

Meanwhile, their defense — which was nowhere near the Rams defense Staley coached last year in terms of talent — looked impressive.

After one week, the Chargers appear to be the contenders for an AFC Wildcard spot we thought they would be. If Herbert returns to his 2020-level of dominance, and the defense continues to progress, they’ll soon pass the Broncos in these rankings.

Every team in the division played exceptionally well, so it shouldn’t be viewed as too big of a knock that the Raiders find themselves in last place here.

Sure, they had one of the more impressive wins of any of the teams in the division — narrowly escaping with a home win over the wounded Baltimore Ravens — but outside the box score, the team raised far more concerns than any of their other AFC West counterparts.

All offseason, the concern with Vegas has been that their decision to demolish their offensive line — arguably the team’s greatest strength and identity during the Jon Gruden — would ultimately lead to regression from 2020’s dominant aerial attack and further regression from 2019’s stellar ground game. One week in, and that appears to be the case.

Carr and the Raiders’ offense ended the game strong to complete the comeback, but that doesn’t erase the fact the unit found itself mired in the swamps for much of the game’s first two acts.

Passer rating is a severely flawed metric, but Carr’s passer rating against the Baltimore Ravens would have been his fourth-worst of the 2020 season.

In terms of EPA+CPOE composite, Carr was the league’s 19th-best quarterback, ranking among the likes of Sam Darnold and Daniel Jones.

One could argue, that this is a small sample size and just one bad game from Carr, which is certainly true. However, it’s also true that if Baltimore’s defense didn’t become inexplicably exhausted for Vegas’ final drives, that Carr’s ranking would have been among the very-worst starting quarterbacks from Week 1. 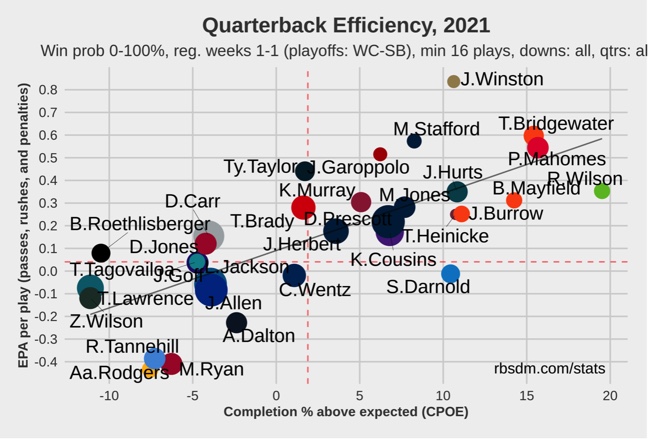 Equally concerning is the fact the Raiders’ absurdly expensive backfield was by far the worst backfield in all of football this week. Imagine if the Broncos’ defense (also the most expensive in the league) allowed the Giants to drop 45 points and gain over 500 yards in Week 1? That’s the equivalent of what Vegas’ running backs did Monday night.

The existence of the Raiders’ run game is so abhorrent, it forces the graph below to expand. If not for their pitiful ground attack (which again, has seen more investment in it than any other backfield in football) this graph could be cut-off at the Minnesota Vikings and feature every NFL team. Unfortunately, that’s not the case, and the data has to make an exception for Vegas. 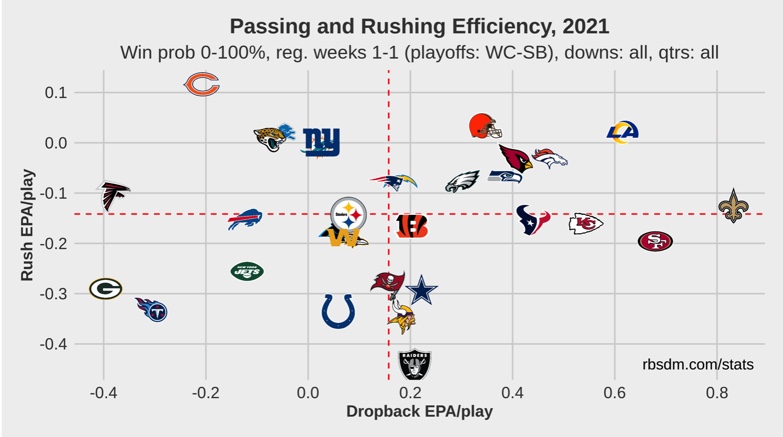 On the plus side, the Raiders’ defense was much better than anyone anticipated. The unit looks like it might have improved from one of the two-or-three worst defenses in the league, to being a middle-of-the-road unit.

Put that defense with last year’s Raiders team and you have a contender in the AFC. Unfortunately, it feels like the offense has fallen too far for the defensive improvements to carry the weight Raider Nation was hoping for.