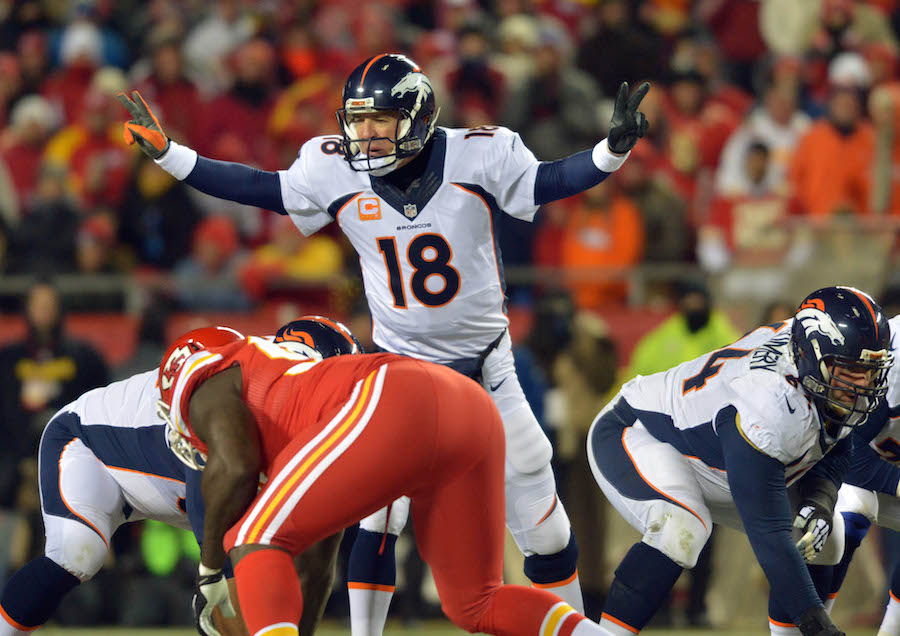 Scrap all of that. What Peyton Manning really needs to do is simply this: Rewrite the narrative.

If anyone can, Peyton can.

The word “narrative” has been a part of the sports reporting lexicon for exactly 649 days. It was born on Dec. 8, 2013 and has thrived ever since. Prior to that, the word was reserved for high school and college English Lit. courses – never sports. Seriously, whoever used the word narrative anyway?

But that all changed in Denver, Colo. on a bitter night in December. With one statement, the word was given new life: “Whoever wrote that narrative can shove that one where the sun don’t shine.”

Peyton Manning was the author of that comment, careful words he blasted out through the airwaves of Denver’s 850 KOA radio. He said it because he was ticked. Only he wasn’t so much mad right then. At that specific time, he was probably very happy. After all, he’d just turned in a quarterbacking performance for the ages. Just moments before talking on air, he’d scorched the Tennessee Titans; Manning went 39-for-59 for 397 passing yards, tossing four touchdowns and no interceptions. His Broncos won 51-28.

Manning was actually irritated, however, for the entire two-week period leading up to the game. During that 14-day stretch, the narrative (or, as we used to call it, the “story” or “storyline” or “buzz”) was that Manning couldn’t play in cold weather. On Nov. 24, the Broncos had suffered their second loss of the season in a blustery bout against the Patriots; Gillette Stadium was wet, windy and cold that night – 22 degrees with 29 mph winds.

Pair that loss with a wound that had yet to heal in Denver – a bitter cold home loss against Baltimore in the previous season’s playoffs – and the media was busily developing a theory that a post-neck-surgery Manning could not function when the temperature dipped.

And Manning had a right to be miffed. Against Baltimore, he didn’t play great, but he coolly led the Broncos to the go-ahead touchdown deep into the fourth quarter. It wasn’t his fault that the game miraculously went into overtime. And against he Patriots, his numbers weren’t good, but somehow he managed to force overtime in Foxborough.

Amidst the criticism, he patiently and professionally bided his time. And, as if he’d ordered it up from Mother Nature herself, the Tennessee game provided the perfect opportunity to disprove all of his newfound naysayers. At kickoff, the temperature at Sports Authority Field was 18 degrees; with the wind chill, it was a bone-chilling 11.

Manning played as if he was on fire and then introduced us all to the word “narrative.” We’ve been using it ever since.

This week’s narrative? Peyton Manning is done. That’s what they’re saying on the streets of Denver – across the country in fact.

Much like the aforementioned scenario, Manning was recently lackluster in a stinging playoff loss to the Indianapolis Colts. Then, last week, he fired blanks against Baltimore, missing one too many deep routes and, at times, looking flustered in Gary Kubiak’s new “hybrid” offense. In his last two games as the Broncos starter, Manning has gone a combined 50-for-86 for 386 yards, with just one touchdown and one interception. The Broncos still won the Ravens game this past Sunday, but Manning has been cranky ever since – the narrative, you see, hasn’t been pretty.

Immediately after the win over the Ravens, Manning appeared testy at the podium. The mood has changed just a bit; on Tuesday Manning was jovial with the media, and on Wednesday news of Manning’s kindness broke. He’d flown in a fan from Indianapolis with a Stage 4 breast cancer to Sunday’s game, took care of her flight, her tickets and even arranged for sideline passes.

Gestures like that make it difficult for media types to perpetuate any kind of negative tone when it comes to Manning, but those darn scribes are pretty good at separating the stuff that takes place on and off the field. As the Broncos get set to face the Chiefs at Arrowhead tonight, the scuttlebutt will undoubtedly be shifting back to what it was on Monday: Have we seen the last of Peyton Manning as we know him?

Just one week into the season, Manning is sick and tired of the narrative. The last time that happened, he told us all to stick said narrative where the sun don’t shine.

Would it surprise anyone if Manning went out tonight with the same game plan?

Make no mistake; tonight’s game is less about Xs and Os and more about making everyone eat their own words.

For Peyton Manning, it’s again time to change the narrative.