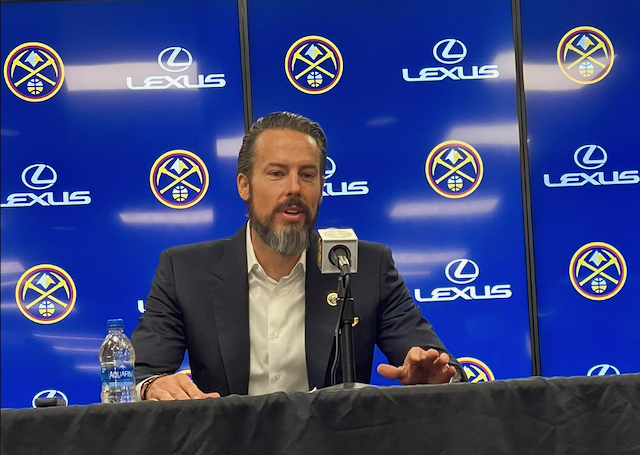 After a few delays and scheduling hiccups, Denver Nuggets governor Josh Kroenke spoke to local media for the first time in several years.

Initially a press conference focused on the departure of Tim Connelly for the Minnesota Timberwolves and elevation of Calvin Booth to the new lead decision maker for the organization (though not the president of basketball operations), Josh Kroenke was peppered with a number of questions ranging from the financial constraints of KSE to the Altitude dispute with Comcast.

“First, very happy for Tim,” Kroenke opened his presser. “I think back to 2013 when I hired him. I kinda took some flak for hiring an unknown guy named Tim Connelly to come here and work for us, so it’s funny to be catching a little bit of flak on the back end with him on the way out.”

When asked if he would have handled contract negotiations with Connelly differently in hindsight, Kroenke simply said yes. In 2019, Connelly negotiated a five-year extension with the Nuggets that included an opt-out clause after three seasons, giving both sides an opportunity to evaluate the general manager landscape. KSE had opportunities during the 2021-22 season to offer Connelly a contract extension before the option hit. They chose not to, perhaps not realizing an offer of this magnitude would come Connelly’s way.

“The term equity was used a lot the past three weeks with me,” Kroenke shared. “It was an interesting conversation to know that that’s out there, and I don’t know what their deal was, but it was repeated to me through multiple areas that there was some sort of…whether it was equity, whether it was phantom equity, whether it was some sort of valuation upside. I don’t know what it is. You’ll have to ask the Minnesota Timberwolves and you’ll have to ask Tim Connelly.”

The Nuggets were scared off by the equity conversation for a number of reasons. For one, it’s a tier above what they believe an executive should be paid in the sports market. For another, it has ramifications for the rest of the KSE franchises, from the Colorado Avalanche and Colorado Rapids to the Los Angeles Rams and Arsenal football club. Once equity is opened up as a potential negotiating term for an executive of one franchise, it becomes a negotiating tactic for all of them.

“We want to reward good people,” Kroenke proclaimed. “But ultimately, when you go to the stratosphere that some clubs, say, some desperate clubs are willing to go to, there’s a tier out there that just doesn’t make sense.”

“The Denver Nuggets are not a start-up,” he said.

Listen to "Reacting to the Josh Kroenke comments on Tim Connelly and the Denver Nuggets" on Spreaker.

Kroenke made it perfectly clear that the Nuggets were willing to lose Tim Connelly to what was perceived to be an outlandish offer, whether it be this season or a season in the future. Keeping Connelly for the cost the Timberwolves offered simply wasn’t within the KSE business model.

The criticisms of Kroenke and the KSE business model are not without merit. Ujiri’s vision was what led to Denver’s success during and after the Carmelo Anthony trade saga. Connelly’s vision was what led to Denver’s success as Nikola Jokić grew into an MVP caliber player. Both executives are gone, poached by organizations that value their contributions to winning more than the Nuggets do.

Kroenke shared how his vision of the front office structure changed following the loss of Ujiri to the Toronto Raptors.

“When Tim was hired in 2013, I kind of made a pact with myself and in discussions internally with KSE to have the next man on staff in case something happened. So, we have always operated under the guise of a revolving shark’s teeth kind of system since 2013 with Tim, Arturas [Karnisovas], and now Calvin.”

On the transition to Calvin Booth, Kroenke stated: “Calvin has had the opportunity to learn under the head of the Chicago Bulls and now the head of the Minnesota Timberwolves…I think his playing experience brings a new background that we haven’t had around here in quite awhile.”

“Calvin’s a worker…he’s not afraid to roll up his sleeves and get his hands dirty,” the governor explained.

So, KSE has truly been preparing for this outcome for a long time. They knew this was a reality they had to prepare for, and they have confidence Calvin Booth can carry the torch now that Connelly and Karnisovas have moved onto higher paying positions. Perhaps the Nuggets have a right to be confident, given the organizational success they’ve had across several sports franchises. Perhaps they think too highly of themselves.

Josh Kroenke also shared several insights on the priorities for the Nuggets organization going forward, including declarations to pay the luxury tax and build a new practice facility.

“We’re entering a different phase of the organization and this squad in particular which is: It’s championship or bust. It’s the first time those words have been uttered around these halls. We have a two-time MVP. We have two more all-star caliber players coming off of injuries, and I think that we’re poised in a way that this organization perhaps hasn’t been in the past.”

The Nuggets haven’t paid the luxury tax since the days of Carmelo Anthony and Allen Iverson. They’ve worked within the confines of a small market team for awhile, but now that there are real championship aspirations, it appears KSE will break the mold again. They owe that much to Nikola Jokić and company, and there may be no better opportunity for the Nuggets organization to win their first championship in franchise history than right now.

It also appears that a practice facility for both the Nuggets and Avalanche is once again on the radar.

“Plans are in place to build a facility that will not only make Avs, Nuggets, players, coaches happy but the city of Denver as well.” Kroenke shared. He didn’t specify the timeline of such a project, but when asked whether current Nuggets and Avs players would see the fruits of that labor, Kroenke said, “I believe so. There are certain parts of the development that will take longer than others, but this part is [something that can happen quicker].”

For the Nuggets, it’s good to hear about these financial commitments. Though nothing is guaranteed until contracts are signed, it appears that Nuggets fans can expect the team to go for a title now while also investing in their future. Rookies and free agents are also hoping to be recruited by teams with the best teammates, coaches, and facilities to make the overall experience great. Perhaps the Nuggets are ready to evolve from their small market reputation.