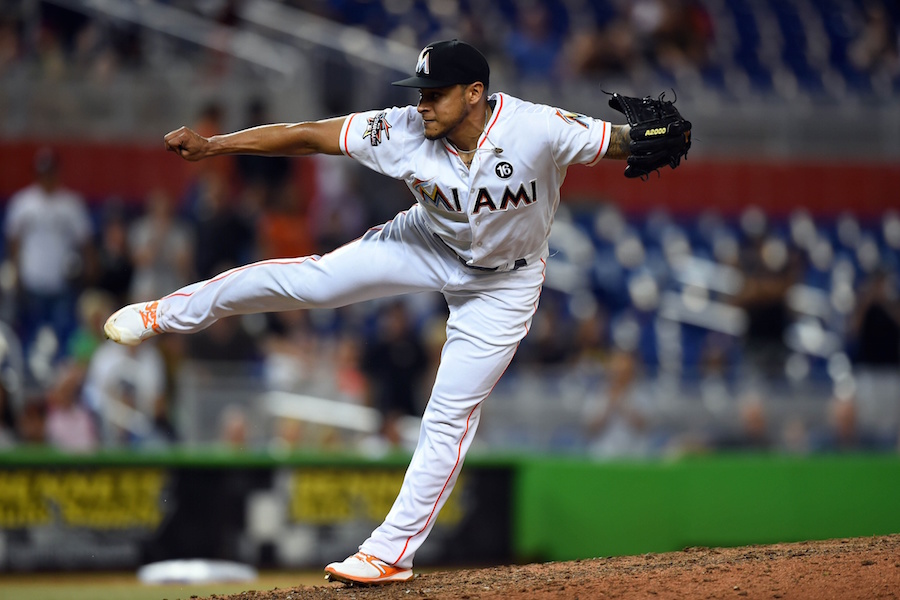 The Miami Marlins are looking to shed payroll in an effort to expedite the sale of the team. The Yankees and Red Sox are stealing the majority of the Marlins rumor mill headlines, both having needs with their corner infielders, but it’s a pitcher that could cause a bidding war among National League contenders.

AJ Ramos has carried a relatively light load through the first half of the MLB season in Miami, pitching just 28 innings in the closer role for the Marlins. He’s 13-of-14 in save opportunities in 29 games. Ramos is owed the balance of a $6.55-million contract for 2017, then will enter his final year of arbitration in 2018 before becoming an unrestricted free agent. He’s an attractive target for at least three playoff contenders in need of back-end help in the bullpen: Arizona, Colorado and Washington. While Washington has the worse bullpen through the first half of the season, Colorado may be the most desperate of the bunch.

The Diamondbacks boast the second-best bullpen ERA in the National League, trailing only division-rival Los Angeles, despite pitching in the No. 3 hitter-friendly ballpark in the league so far this season. Arizona should desire Ramos if only to keep pace with the Dodgers, whom they’d likely face early in the playoffs.

The Nationals, despite ranking dead last in the NL in bullpen ERA at present, have a comfortable 9.5-game lead over the Braves in the NL East. They’ll need bullpen help when October rolls around, so their need is certainly high, but they will have until the deadline to see how things shake out.

Colorado, meanwhile, may be tempted to make a move much sooner than the deadline.

The Rockies are in a tailspin, having lost eight consecutive games to close out their first 81 games of the season. Their bullpen ERA has skyrocketed in the month of June, and now sits at 4.45 for the season. The help they’ve called up from the minor leagues, specifically Carlos Estevez, and in a limited capacity Jairo Diaz, has not helped much. Short (and rough) outings from the young starting rotation isn’t helping matters.

Over the past nine days, Colorado has slipped from first place in the NL West to 5.5 games back of the Dodgers in the division and 4.0 games behind Arizona for the top spot in the Wild Card. They hold a 6.5-game advantage on the Cubs for the final Wild Card bid, but Chicago is slowly creeping up.

Ramos doesn’t seem like an ideal Coors Field pitcher, per-se, as he relies heavily on a fastball-slider combination and sparsely throws a true curveball. His changeup averages about 8 MPH difference from his fastball, and it’s slightly faster than his slider. Still, Ramos has been successful in his six outings at Coors Field so far in his career.

Over 6.0 innings pitched in Denver, Ramos has three saves and has allowed just three hits. His 0.667 WHIP at Coors Field is half his career average of 1.222.

At 3.49, Ramos’ ERA this year is on pace to be the highest of his career (in a full season). However, his batting average against, WHIP and strikeout-to-walk ratio are all better than last year, when he was named an All-Star for the first time.

Ramos would slot in well in either the eighth or ninth inning as needed. A combination of Ramos vs. right-handed hitters and Jake McGee vs. lefties in the late innings would be deadly. Additionally, Ramos can serve as the back-up closer if Greg Holland is not available.

The Rockies have talent and depth all over their farm system, so there’s a good chance Colorado could land Ramos without having to move major pieces from the big-league roster. His price tag isn’t the lowest they’ll find on the free-agent market, but they’d certainly make up those dollars at the gate if he kept Colorado in the race into September and beyond.

Miami can play the waiting game, knowing that a number of teams will want Ramos, so the Rockies would need to make a sizable offer now if they want to land the All-Star ahead of the deadline. How things shake out between now and the All-Star break will certainly influence that need. A series loss to Arizona this weekend would spike that need quickly.

Ramos would certainly plug a big hole in the bullpen, but with the Rockies’ need growing more urgent with each passing day, Miami can make their demands much higher in the near future knowing that Arizona and Washington will both be calling.