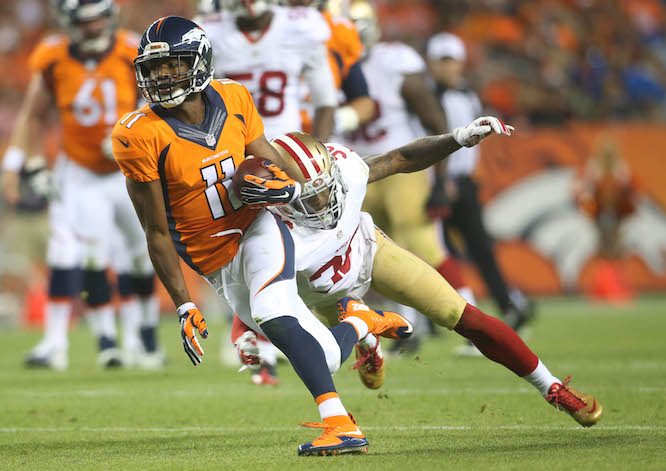 The third preseason game is typically considered the dress rehearsal for the season, but with a total of 37 player cuts needing to be made within seven days, Broncos head coach Gary Kubiak had plenty of game-action evaluation to do on Saturday night against San Francisco.

The Broncos have an exceptional wide receiver tandem in Demaryius Thomas and Emmanuel Sanders, but who will fill the slot role still appeared up in the air as Cody Latimer, Andre Caldwell and Jordan Norwood all saw significant action against the 49ers. Later in the game, Jordan Taylor made his presence felt, pulling in four catches and garnering a pass interference call that yielded the eventual game-winning touchdown.

At running back, it appears Ronnie Hillman has firmly supplanted Montee Ball as the No. 2 back and may be taking aim at C.J. Anderson, who improved on his numbers from earlier in the preseason, but was not looking yet back to his Pro Bowl form from late in 2014 with his 13 carries Saturday. Ball meanwhile earned only four carries on the night, the same number as Juwan Thompson; Ball averaged just 2.8 yards per carry, but did have an impressive catch and run. Hillman continued to impress, averaging 7.0 yards per carry on just five touches.

Gary Kubiak will have some tough cuts to make at wide receiver and running back in the coming week. The MHS team was active during the game, providing their insight and analysis on the position battles and who might be cleaning out a locker come Sept. 5 when final rosters are cut down to 53.

Montee Bubble may be playing for his Broncos life tonight. . . he cannot afford to be fourt on the depth chart. Too much $$$ on his contract

Jordan Norwood making his statement for the roster. Two 3rd-down receptions. Working as the slot man. Seen all first-team 3-WR reps so far.

Caldwell and Norwood really battling for roster spots out there. Even away from the ball, both are going 110%

Based on this game, Jordan Norwood deserves to be your third receiver

In a draft full of great receivers, Cody Latimer looks like the rare miss. #Broncos

Omar Bolden walking off the field under his own power.

Interesting … but not all surprising. Juwan Thompson getting all the reps to start the half over Montee

Interesting … but not all surprising. Juwan Thompson getting all the reps to start the half over Montee

Whether he makes the grab or he helps coax the pass interference penalty, Jordan Taylor just makes things happen.