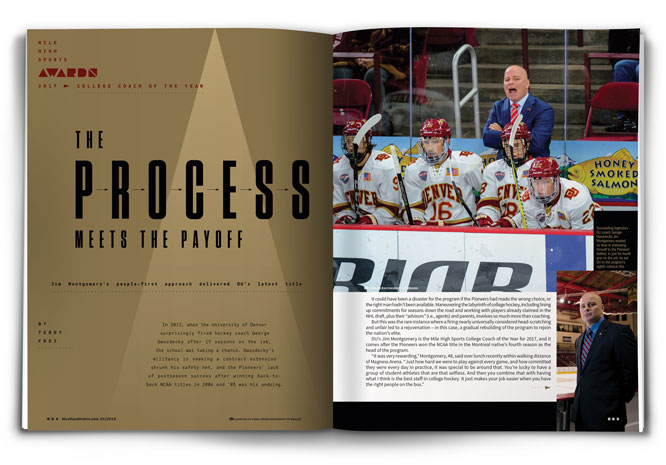 The Process Meets the Payoff

In 2013, when the University of Denver surprisingly fired hockey coach George Gwozdecky after 19 seasons on the job, the school was taking a chance. Gwozdecky’s militancy in seeking a contract extension shrunk his safety net, and the Pioneers’ lack of postseason success after winning back-to-back NCAA titles in 2004 and ’05 was his undoing.

It could have been a disaster for the program if the Pioneers had made the wrong choice, or the right man hadn’t been available. Maneuvering the labyrinth of college hockey, including lining up commitments for seasons down the road and working with players already claimed in the NHL draft, plus their “advisors” (i.e., agents) and parents, involves so much more than coaching.

But this was the rare instance where a firing nearly universally considered head-scratching and unfair led to a rejuvenation – in this case, a gradual rebuilding of the program to rejoin the nation’s elite.

DU’s Jim Montgomery is the Mile High Sports College Coach of the Year for 2017, and it comes after the Pioneers won the NCAA title in the Montreal native’s fourth season as the head of the program.

“It was very rewarding,” Montgomery, 48, said over lunch recently within walking distance of Magness Arena. “Just how hard we were to play against every game, and how committed they were every day in practice, it was special to be around that. You’re lucky to have a group of student-athletes that are that selfless. And then you combine that with having what I think is the best staff in college hockey. It just makes your job easier when you have the right people on the bus.”

The bilingual Montgomery, who spent four seasons at the University of Maine, was on an NCAA title team as a senior captain in 1993. The Black Bears were an incredible 42-1-2 and freshman Paul Kariya won the Hobey Baker Award as the college game’s top player.

“My Maine experience was probably the most important four years of my life, to shape me as far as discipline, commitment to a team and understanding what it was really like to lead and build,” Montgomery said. “I saw them build and saw the people they brought in. I saw that it’s people that matters more than talent.”

Because of his time at Maine and DU, Montgomery this spring became the fourth man to both play on and coach national champions.

“I don’t think about those things,” he said. “I just like being part of championship teams, and those are those are the memories you have – the relationships you have and go through to be able to get to that unbelievable moment. That’s what makes it all special.”

After his stay at Maine, he had a lunch-bucket pro center’s career, mostly playing in the AHL but also spending 122 games in the NHL with St. Louis, Montreal, Philadelphia, San Jose and Dallas. His major NHL notoriety came from his stay with the Flyers, when he mused that the line of John LeClair, Eric Lindros and Mikael Renberg was a “Legion of Doom” and team announcer Gene Hart pounced on it.

Montgomery came to the Pioneers after a successful run as general manager and head coach of the Dubuque Fighting Saints of the United States Hockey League, one of NCAA hockey’s major feeders. The Fighting Saints were an expansion team; he left them as USHL champions, coaching them to the league title in the 2013 playoffs after accepting the DU job. The Fighting Saints also won the Clark Cup in 2011.

At DU, Montgomery repeatedly brings up “the process,” and his players dutifully manage to work it into answers about anything and everything, whether the plane flight to South Bend or the power-play goal at 2:38 of the second period. The process mostly involves setting standards and goals and zealously pursuing then. And it has worked.

In his first four years at DU, the Pioneers finished sixth, fourth, third and first in the National Collegiate Hockey Conference’s regular season, and they reached the Frozen Four in 2016 before losing to eventual national champion North Dakota in the semifinals.

The 2017 title, then, wasn’t a lightning bolt; it was part of a progression.

As the end of the calendar year approached, the Pioneers – despite a roster still including star forwards Troy Terry, Henrik Borgstrom and Dylan Gambrell – were having an up-and-down season. And this shows how heightened the standards have become: They were viewed as inconsistent and at times disappointing despite spending stints as the top-rated team in the country.

“I haven’t seen the consistency in how we prepare and how we play every day,” Montgomery said. “That’s the biggest thing that concerns me. I don’t know if this team is ever going to get the maturity and commitment level to be a championship team again. That’s just because we haven’t done it. Now, can we get there? Yeah. Do we have the talent? Yeah.  But, to me, it’s how we need to be, to be more selfless and hard to play against.”

If that sounds as if Montgomery is challenging this team to live up to the work ethic of the 2017 NCAA titlist, he is.

So how long will he be here?

Montgomery has interviewed for at least two NHL coaching jobs – at Calgary and Florida – and likely will have additional opportunities to at least discuss moving up. He neither hides those talks nor portrays his departure from DU as inevitable. The NHL, of course, treats coaches as disposable and as scapegoats, though once in the carousel additional chances can come.

“My family and I love it here,” Montgomery said. “We love me working at the University of Denver. I have a lot of autonomy on who to bring in and all that, and the quality of life here in Denver is just spectacular. For me to even entertain leaving, it’s going to have to be someone that convinces me that they have the right plan and I’m going with the right people.” 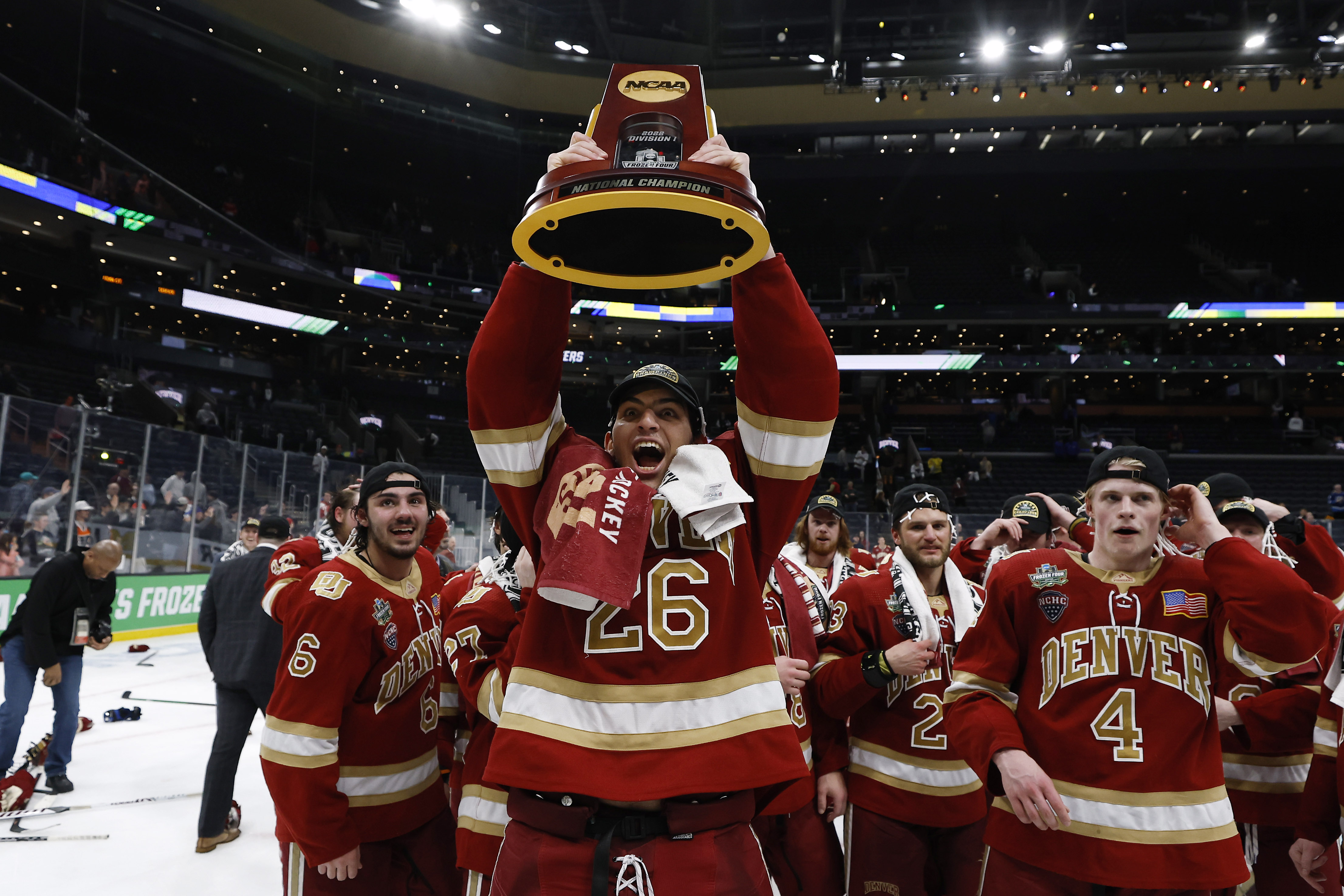 Long shot: The DU Pioneers surprised everyone in college hockey – except themselves