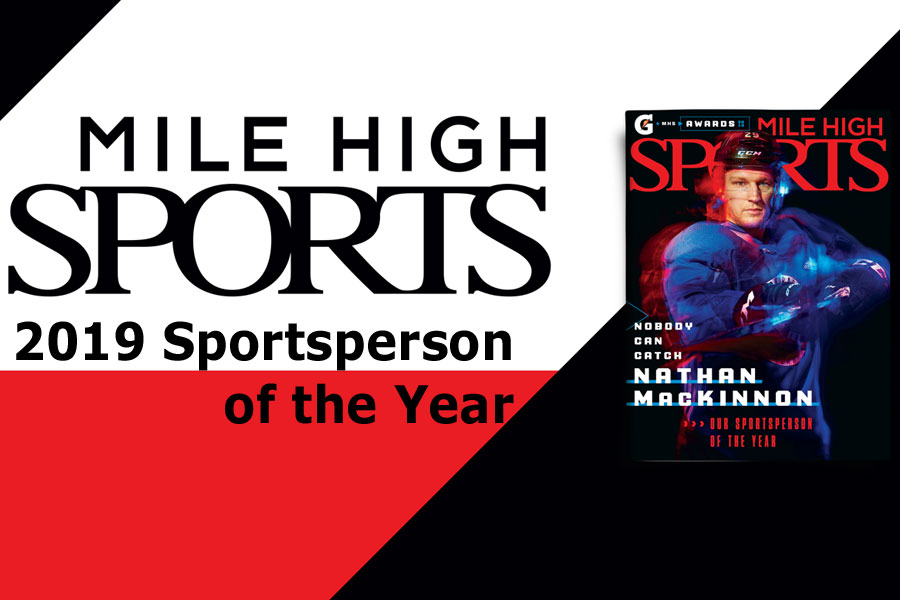 Nate the Great: MacKinnon skates off with our top honor

The following article is from the January Issue of Mile High Sports Magazine.

The choice of Nathan MacKinnon as Mile High Sports Magazine’s Sportsperson of the Year for 2019 wasn’t a slam dunk … or in this case, an uncontested shot into an open net.

The Rockies’ Nolan Arenado and Trevor Story again had terrific seasons in 2019. As a left-side-of-the-infield tandem, they again were hard to beat.

And what of Broncos’ players? The correct box to check is “None.”

Instead, depending on definition of terms, I could argue for the choice of late owner Pat Bowlen as another deserved posthumous honor. He died in June and was touchingly saluted and then inducted into the Pro Football Hall of Fame in July. He remains a key figure as the franchise operates under the Pat Bowlen Trust and faces both messy legal machinations and a possible transition to his youngest daughter, Brittany, as the principal owner. Moving forward, even after his death, the guiding considerations should be: What did Pat want? Or, given his success as an owner earning universal respect: What would Pat do? In that sense, he can – and should – remain influential.

Beyond Denver team sports, Alpine skier Mikaela Shiffrin, from Vail and still only 24, is hands-down the best in the world, and again is dominating the World Cup circuit. The asterisk is she plies her trade literally around the globe.

Here’s why the choice is MacKinnon, also only 24 (notice a pattern here?) and in his seventh season with the Avalanche.

In the past three seasons, the Halifax, Nova Scotia native has become one of the top handful of hockey players in the world. Once he got there, he didn’t coast. In fact, his improvement continued in 2019 and he arguably now is the second-best player in the NHL, behind only Connor McDavid of the Edmonton Oilers. 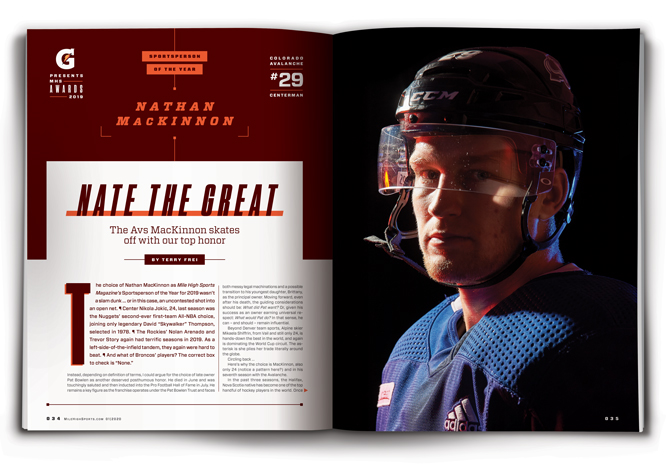 “It’s nice to have good years,” MacKinnon told me after a recent Avalanche practice. “I didn’t want to have just one good year and fade away after that. So, obviously, being consistent is a tough thing in pro sports. It’s a tough schedule. There are a lot of variables. I pride myself on consistency.”

Last season, MacKinnon was named the league’s third-best forward in an NHLPA peer vote, behind only McDavid and Pittsburgh’s Sidney Crosby. The interesting thing about that is McDavid long has been a reference point in any discussion of MacKinnon’s career – more on that in a minute – and Crosby, also from the Halifax area, in succession has been MacKinnon’s idol, buddy, off-season training partner and co-star in various (and hilarious) Tim Hortons commercial campaigns.

With all due respect to Crosby, one of the all-time greats, his slotting ahead of MacKinnon in 2019 was more of an emeritus, body-of-work gesture than as assessment of reality.

This has been part of the fun: Since the Avalanche made MacKinnon the No. 1 overall pick in the 2013 NHL draft at age 17, Colorado fans have been able to watch him grow up and into that stardom role, including through some seasons when it seemed he might be destined for career mediocrity.

“It feels good,” he said. “I’ve matured a ton. My first season seems like another life ago. It’s obviously flying by. But I’ve made a lot of friends and it’s nice to be on a really good, competitive team this season. I’m 24. I’ve gotten better every season. I feel good right now. I feel the best I’ve felt. Hopefully, that trend continues.”

Unlike McDavid, who went No. 1 overall in 2015, and Crosby, No. 1 in 2005, MacKinnon never was billed as one of the NHL’s occasional “generational” talents.

Unlike McDavid and Crosby, MacKinnon was not an instant superstar.

In his earlier years, after his impressive games, you’d walk away asking about MacKinnon: With that breathtaking talent, with those eye-popping skills, why can’t he do that every night?

Then the switch flipped.

Loosely speaking, he is doing it every night.

(Now you ask it about Jokic, especially since the Nuggets center has gotten off to a lackluster and puzzlingly inconsistent start in 2019-20. If he can follow MacKinnon’s lead and take the next step, he might be on the Sportsperson of the Year cover and profiled in this space a year from now.)

From the time the puck was dropped to open 2017-18, MacKinnon’s fifth season, he has been among the NHL’s elite. MacKinnon finished second in the Hart Trophy voting in 2018, deserved to be among the three finalists again last season (but wasn’t), and as the New Year approached, was having a terrific 2019-20. He mostly centers Gabe Landeskog and Mikko Rantanen, and the line has been electric.

“It’s not magic,” MacKinnon said. “We’re even keel and we come out and dominate. That’s our mindset. We’re not wondering where one another is on the ice. It’s second nature now, which I think is real cool.”

He’s been asked about the comparisons to McDavid and also Toronto’s Auston Matthews, another recent “generational” No. 1 many times – and that’s by me alone. He never has been offended by it.

“There’s only one me, good or bad,” MacKinnon told me. “I’m not anybody else. I work really hard and I do a lot of things to get better . . . I don’t know if I’m going to be a Connor McDavid one day, but I’m going to be the best version of myself and I hope that can help turn this team into a championship team.”

Going into the Avalanche’s final game of the calendar year, MacKinnon had 39 goals and 57 assists for 96 points in 82 regular-season games in 2019. Plus, he had 6 goals and 7 assists in 13 playoff games last spring.

Plus, both last season and this season, MacKinnon has been heroic when the Avalanche has gone through extraordinary injury runs, including when Landeskog and Rantanen were out for extended periods

I asked Avalanche coach Jared Bednar to what extent this latest MacKinnon run this season has highlighted his center’s continued maturation.

“I would say significant,” Bednar said. “Not unlike we saw at the end of last year, though. We were without Mikko and Landy down part of the stretch. For lack of a better term, he could have put our team on his back and he was our leader on and off the ice.”

This comes after even he characterized his horrible 16-goal total in the Avalanche’s dreadful 2016-17 as “embarrassing.” And he was right, especially considering Colorado in July 2016 had showed stunning faith in his upside, signing him to a seven-year, $44.1 million contract.

He since has justified that faith.

MacKinnon has a bit of a swagger at times – and that’s in a good way – but he surprisingly admits he had doubts early in his career about whether he could become the play he has become.

“I didn’t think I really could,” he said. “I didn’t really think about it. It feels like a long time ago with that mentality. But yeah, I didn’t really know if I could ever do it. I was getting like 50, 60 points and I was kind of at breaking point after a last-place finish. I went first overall and I was embarrassed. I had to make a decision about whether I wanted to take my game to the next level or just be 50, 60-point guy on a bad team.

He paused, then added, “It feels normal now.”

MacKinnon’s seven-year deal made him one of the most overpaid players in the league at its outset, yet by now he is even more strikingly underpaid through 2022-23 in a league with a hard cap that doesn’t allow for renegotiation. (His own linemate, Rantanen, in late September signed a six-year, $55 million deal, and the front-loaded structure means he will be paid twice as much as MacKinnon this season.)

With speed, strength, maneuverability and skill, MacKinnon leaves opposing skaters hoping they have the angle plotted to contain him … and then they don’t. He’s gone. He’s either blown by them or cut, slithered or dodged into position for a shot or setup pass.

“He’s so dynamic,” Landeskog told me. “He changes the momentum sometimes on his own and when he starts going, it’s difficult to keep up with him. It’s hard for guys to stop him. It’s fun to see how he’s taken this team and driven us forward. In my opinion, he’s the best player in the world. I’m biased. I see him every single day, but I just don’t know if there’s a guy who can attack you in so many ways.

“He can score off the rush with speed, he can dominate, punish guys down low physically. He can come out of the corners with the puck, he can dish the puck. Everything’s happening so fast, he can go from stick-handle, to pass, to shoot. When he’s coming down on a 2-on-1, he has all three options. It’s not easy to do at that speed.”

Landeskog and defenseman Erik Johnson are the only Avalanche who have been with MacKinnon his entire career.

“He’s really comfortable now,” Johnson told me. “He’s had all the physical tools and sometimes you just need your mind to catch up. I think with him, he had matured, and he knows what he has to do every night and how to get his body ready to play. He puts in all the long hours. He’s super-disciplined in how he takes care of himself off the ice. He’s just learned how to be a pro over the last handful of years. That’s been fun to watch because you always knew he had the ability, so now it’s fun to see him put it all together and be one of the best in the league.

“I’m sure he always knew he could do it. Sometimes it takes time for it to happen. He drives our play every night. He holds people accountable. Our guys know you have to be on your game if you play with him because he’ll bark at you if he thinks you’re not on your game.”

Landeskog has noticed MacKinnon’s maturation. Not that long ago, in Bednar’s disastrous first season, MacKinnon rolled his eyes at a Bednar command and the rookie NHL coach, sensing a test of his authority, promptly benched one of his top players for most of a period. That wasn’t a big deal, but MacKinnon now refers to his coach as “Bedsy” in interviews.

“I think everybody goes through it, especially the guys, him and myself, guys coming in at 18, 19,” Landeskog said. “Of course, you mature. I don’t think that’s different from any walk of life, whatever you do between age 18 and age 35, there are a lot of things that are going to happen. He’s definitely matured, no doubt.”

When I asked MacKinnon whether he has grown to feel like a Coloradan, he laughed.

“Oh, I don’t know,” he said. “I kind of go to the rink and go home every day. It feels like home for sure. It’s been seven seasons now. I love it here. I love spending time here. Hopefully, I can explore a little bit more as I get older and have some more free time.”

Terry Frei is a contributing writer for Mile High Sports Magazine and a frequent co-host of the Joe Williams Show on Mile High Sports Radio. He’s a seven-time winner of a state’s sports writer of the year award and the author of seven books, including the Colorado-themed Olympic Affair and ’77: Denver, the Broncos, and a Coming of Age. His web site is www.terryfrei.com 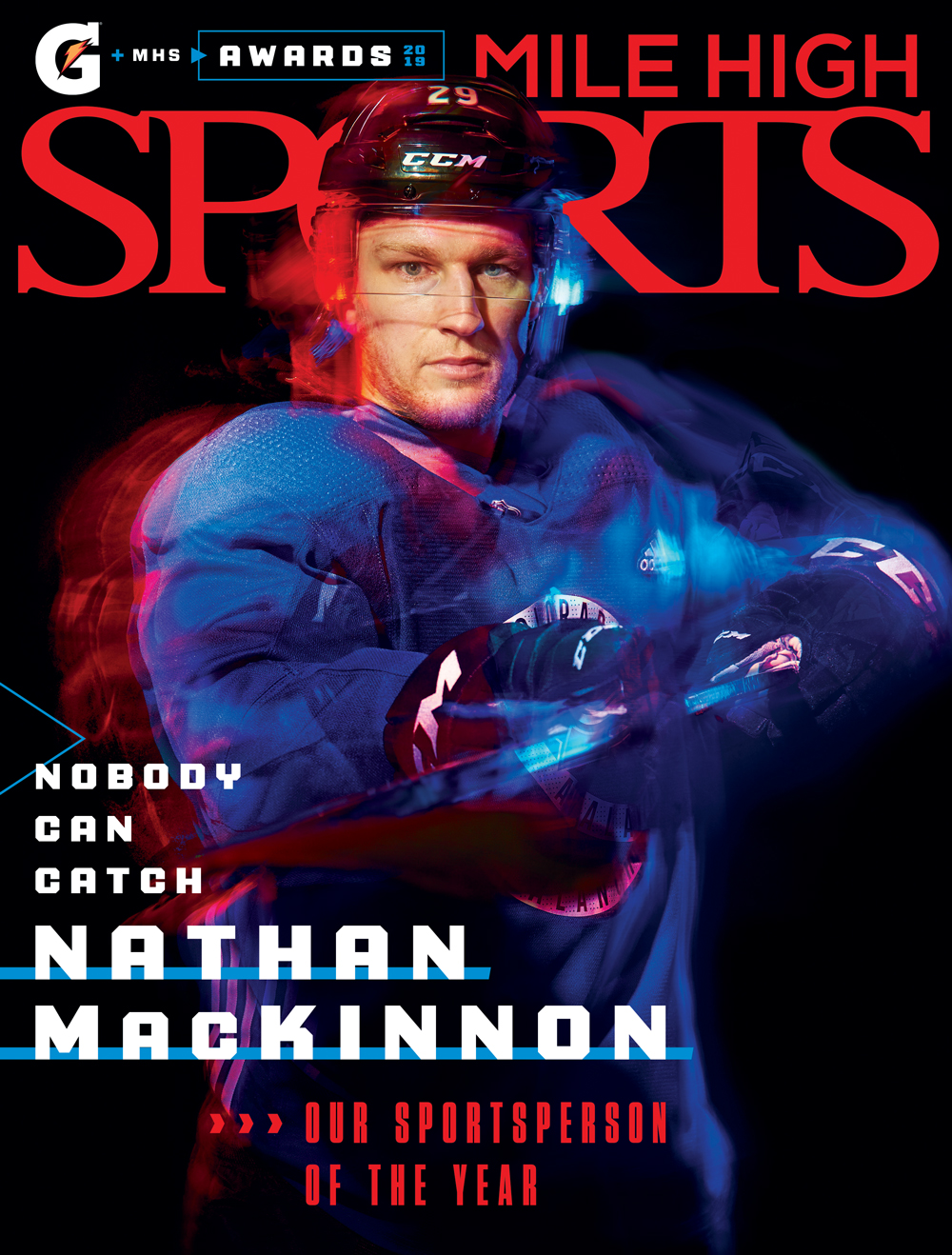 This Avalanche Stanley Cup is for Super Joe