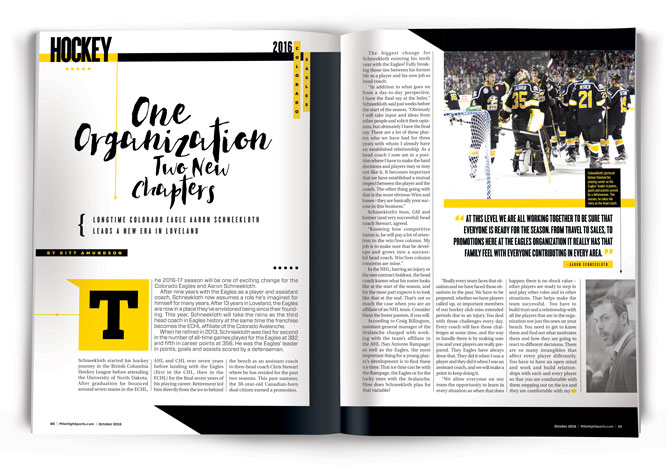 The 2016-17 season will be one of exciting change for the Colorado Eagles and Aaron Schneekloth.

After nine years with the Eagles as a player and assistant coach, Schneekloth now assumes a role he’s imagined for himself for many years. After 13 years in Loveland, the Eagles are now in a place they’ve envisioned being since their founding. This year, Schneekloth takes the reins as the third head coach in Eagles history at the same time the franchise becomes the ECHL affiliate of the Colorado Avalanche.

When he retired in 2013, Schneekloth was tied for second in the number of all-time games played for the Eagles at 382 and fifth in career points at 356. He was the Eagles’ leader in points, goals and assists scored by a defenseman.

Schneekloth started his hockey journey in the British Columbia Hockey League before attending the University of North Dakota. After graduation he bounced around seven teams in the ECHL, AHL and CHL over seven years before landing with the Eagles (first in the CHL, then in the ECHL) for the final seven years of his playing career. Retirement led him directly from the ice to behind the bench as an assistant coach to then-head coach Chris Stewart where he has resided for the past two seasons. This past summer, the 38-year-old Canadian-born dual citizen earned a promotion.

The biggest change for Schneekloth entering his tenth year with the Eagles? Fully breaking those ties between his former life as a player and his new job as head coach.

“In addition to what goes on from a day-to-day perspective, I have the final say t the helm.” Schneekloth said just weeks before the start of the season. “Obviously I will take input and ideas from other people and solicit their opinions, but ultimately I have the final say. There are a lot of these players who we have had for three years with whom I already have an established relationship. As a head coach I now am in a position where I have to make the hard decisions and players may or may not like it. It becomes important that we have established a mutual respect between the player and the coach. The other thing going with that is the most obvious: Wins and losses – they are basically your success in this business.”

“Knowing how competitive Aaron is, he will pay a lot of attention to the win/loss column. My job is to make sure that he develops and grows into a successful head coach. Win/loss column concerns are mine.”

In the NHL, barring an injury or the rare contract holdout, the head coach knows what his roster looks like at the start of the season, and for the most part expects it to look like that at the end. That’s not so much the case when you are an affiliate of an NHL team. Consider them the foster parents, if you will.

According to Craig Billington, assistant general manager of the Avalanche charged with working with the team’s affiliate in the AHL (San Antonio Rampage) as well as the Eagles, the most important thing for a young player’s development is to find them ice time. That ice time can be with the Rampage, the Eagles or for the lucky ones with the Avalanche. How does Schneekloth plan for that variable?

“Really every team faces that situation and we have faced those situations in the past. We have to be prepared; whether we have players called up, or important members of our hockey club miss extended periods due to an injury. You deal with those challenges every day. Every coach will face those challenges at some time, and the way to handle them is by making sure you and your players are really prepared. They Eagles have always done that. They did it when I was a player and they did it when I was an assistant coach, and we will make a point to keep doing it.

“We allow everyone on our team the opportunity to learn in every situation so when that does happen there is no shock value – other players are ready to step in and play other roles and in other situations. That helps make the team successful. You have to build trust and a relationship with all the players that are in the organization not just the ones on your bench. You need to get to know them and find out what motivates them and how they are going to react to different decisions. There are so many intangibles that affect every player differently. You have to have an open mind and work and build relationships with each and every player so that you are comfortable with them stepping out on the ice and they are comfortable with my coaching style. That is how I am going to approach being a head coach and coaching this team – to be prepared.”

Asked what he sees differently now as a coach that he may not have noticed as a player he says, “The first summer I was hired on as an assistant it didn’t take long to really appreciate how much work everyone in the organization puts in to get ready for the season. It is not just the coaching staff. As a player you kind of just take things for granted because you come in and everything is at your disposal right away. You don’t really realize how much work goes into a hockey team. At this level when the resources are not necessarily the same as those in the NHL, everyone has a hand in the organization and getting it ready for the season each year. At this level we are all working together to be sure that everyone is ready for the season. From travel to sales, to promotions here at the Eagles organization it really has that family feel with everyone contributing in every area. As a player, when I played I know I did, you get into a routine wherein all you worry about is the game and showing up, and then when I became a coach I came on and realized how much work the coaching staff puts into the day-to-day stuff and then how much they put in throughout the season – that was eye opening for me.”

Schneekloth said that he feels like he didn’t realize the value so many of his coaches added to his development as a player until it was later in his career. It was Stewart however that he believes “really transformed my game and made me a complete player. He is definitely one of the best coaches I have ever played for. One coach that I really admire however is the now newly named Colorado Avalanche head coach, Jared Bednar. When I graduated from college I had a chance to play with Jared in South Carolina for one year and then the next year he was on the South Carolina coaching staff so I played for him as well. He is someone I have kept in touch with as I have moved into coaching and he has been a big influence and help with my career.

“Now that we are part of the same big franchise picture it is really exciting for me. I know that he is going to be extremely busy but hockey folks always seem to find time to help each other out. To be able to pick up the phone and call the new head coach of the Avalanche who I have played with, and who was a player and coach in the ECHL with whom I already have a working relationship is pretty unique and I feel fortunate to have an opportunity to do that.”

Bednar says that Schneekloth “is a passionate hockey guy. I can tell by the way he talks about the game; he’s very passionate. He’s an intelligent hockey guy. He puts a lot of work into his preparation; takes a lot of pride in being prepared. He came to our rookie tournament this past weekend; he’s picked my brain, Pratter’s brain (Nolan Pratt). He’s hungry to learn more. Eagles fans are very familiar with him; he’s been a dedicated member of their franchise for a decade or so now. I’m excited for him to get this opportunity.”

Most of the time the relationship between an NHL team and an affiliate is that of the affiliate being the one to most accommodate the NHL parent. That is not the philosophy of the Colorado Avalanche. From the top of the Avalanche organization down to their ECHL affiliate, the Colorado Eagles, Billington believes it is not a one-way relationship. It is a three-way partnership and that the Avalanche has a responsibility to the Eagles and the Rampage. “Our job here is to support our affiliates as much as possible and help them grow and be successful. We are one organization. We all believe that from the top down.”

Stewart agrees and said that is what made the new affiliation so exciting: “We knew that when we signed a four-year agreement with them it was going to be a win-win situation for everyone and hopefully a win-win for all our fans.”