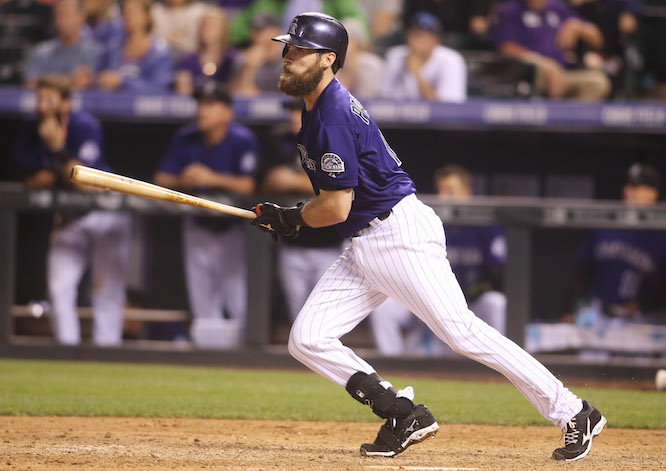 Harry Dunne would be proud of Ben Paulsen after Monday’s dramatic 8-7 Rockies walk-off win against the Rangers.

“Just when I thought you couldn’t possibly be any dumber,” Harry would shout, just as he did to his friend Lloyd Christmas in “Dumb and Dumber,” “you go and do something like this… and totally redeem yourself!”

Indeed, Paulsen was in need of redemption after a fifth-inning mental error allowed Texas to pull within two runs of the Rockies, who scored seven runs in the first two innings, and did not score again until Paulsen’s game-winning single in the bottom of the ninth. With runners on second and third in the top of the fifth, Paulsen fielded a ground ball to first base, casually ran to the bag for the force out and then headed to the dugout. Unfortunately for Paulsen, the force at first was only the second out of the inning. Adding insult to injury, the runner who scored from second base was Rangers starter Nick Martinez who had reached on an error by Rockies starter Chris Rusin earlier in the inning.

Colorado jumped out to an early 7-0 lead, including a Troy Tulowitzki two-run home run that extended his consecutive games on-base streak to 41 games in the second inning. The Rockies would not record another hit until the ninth inning. Colorado had plenty of traffic, including the bases loaded on walks in the eighth and two on in the fourth thanks to a walk and a hit batter, but they could not deliver on the opportunities.

Texas, meanwhile, slowly chipped away at the lead, scoring two runs in the fourth, three in the fifth (including Paulsen’s mental error), one in the seventh, and one in the ninth off closer John Axford, who blew his second save of the year, but earned the win.

Axford allowed a leadoff walk in the top of the ninth and Adrian Beltre doubled in the tying run with two outs after Axford intentionally walked Prince Fielder. Josh Hamilton sent a loud out to left to end the inning and send the game to the bottom of the ninth, tied at seven.

Tulowitzki and Carlos Gonzalez led off the inning with consecutive singles, setting the stage for a possible walk-off. Rockies manager Walt Weiss elected to allow Nolan Arenado swing away, but the NL RBI leader could not deliver, lining a sharp out to left field, and opening the door for Paulsen’s redemption.

Good things did happen, as Paulsen sent a 2-2 fastball into the gap in left-centerfield, allowing Drew Stubbs, who was pinch-running for Tulowitzki, to score the game-winning run.