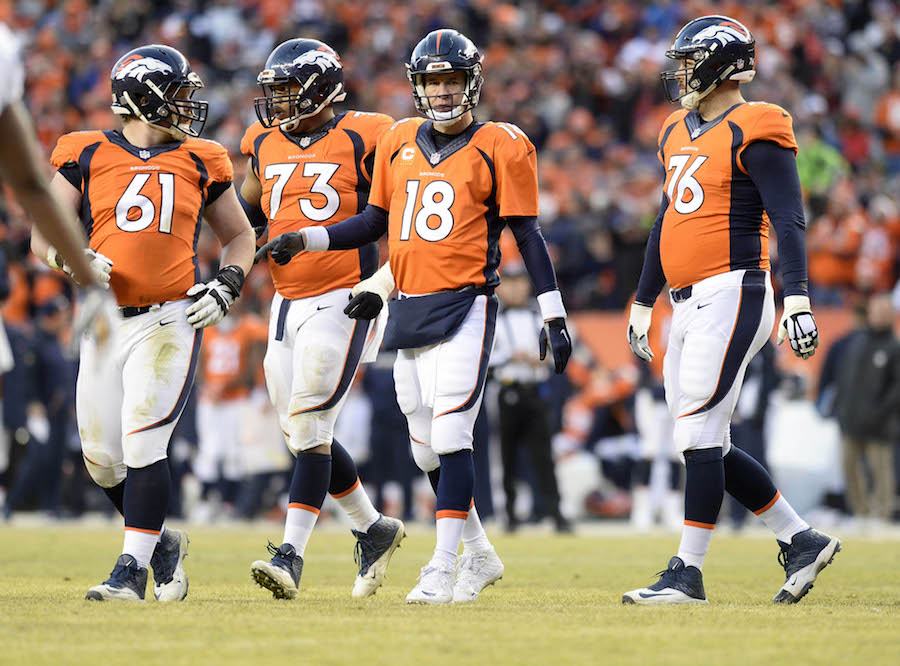 Despite leading 7-6 at halftime and outgaining the Chargers 279 to 93, the Broncos looked like a team in disarray after four first-half turnovers. With a chance to secure both the AFC West and the No. 1 seed in the conference on the line, Denver needed Sunday’s game to once again take a big turn in the second half. Dating all the way back to the first game of December, the Broncos had played effectively two different games in each half. Two of those resulted in wins, two resulted in losses. And when the Broncos needed their biggest turnaround, they turned to their biggest name: Peyton Manning.

Manning relieved Brock Osweiler early in the third quarter after Denver’s fifth turnover of the game. He finished just 5-for-9 for 69 yards, but the Broncos put 20 points on the board with Manning at the helm, leading them to a 27-20 victory in one of the wildest games in recent Broncos history.

Denver got a stop on the opening drive of the half by San Diego, but immediately turned the ball over again, this time with a C.J. Anderson fumble. So with San Diego in the red zone, Gary Kubiak turned to his starting quarterback from Week 1, telling Peyton Manning to start warming up. Philip Rivers found Antonio Gates for a go-ahead touchdown and the madness was about to begin in Denver.

On the ensuing drive Manning quickly handed off twice for a first down, then found Virgil Green for another. He completed just one more pass on the drive, but C.J. Anderson ripped off runs of 27 yards, then 17 yards and what appeared to be a touchdown. After the 17-yarder was ruled down at the goal line Anderson got a second chance that was ruled a touchdown, but again had it overturned. He would not be denied on the next run and the Broncos retook the lead with the PAT. Manning checked into the long run by Anderson, getting big credit for the play. All told, Manning took the Broncos 80 yards on eight plays to reclaim the lead and send Broncos Country into absolute hysterics.

Already feeling desperation, Chargers head coach Mike McCoy went for it on fourth down at the Denver 38 on the ensuing possession and Philip Rivers couldn’t connect with Danny Woodhead and the Broncos got the ball back with all the momentum in their favor. The key stop on the drive was a third-down tackle short of the line of gain by Kayvon Webster filling in for Chris Harris, who had left on the previous play with a shoulder injury.

On the ensuing drive, the Broncos again used a mixture of run and pass, including a clean 16-yard out to Demaryius Thomas, to work the ball into field goal range for Brandon McManus, who hit from 48 yards to stretch Denver’s lead to 17-13.

But on the very next play from scrimmage, Aqib Talib got crossed up on his coverage and let Tyrell Williams get past him for a wide-open touchdown pass from Rivers and another huge swing of momentum. It was Williams’ first NFL catch and it couldn’t have been bigger.

Manning and the Broncos wouldn’t be deterred, though, hitting his first two passes of the ensuing drive for first downs before Ronnie Hillman ripped off a 23-yard run into San Diego territory and field goal range. That was as close as they would get, though, and Brandon McManus hit another field goal, this time from 35 yards, and the Broncos had the game tied at 20 with 9:45 to play.

The defense forced a three-and-out, getting Denver the ball back at their own 23-yard line. Manning was hit hard on the first play and overthrew his receiver. After a short run by Hillman, Manning took a coverage sack on third down and the Broncos were forced to punt themselves. Jordan Norwood knocked the punt loose, but San Diego recovered.

Then, Denver got the break it needed. Rivers, under pressure, tried to hit Williams but threw high into the waiting arms of Shiloh Keo. Manning took over at the Chargers’ 23, but it was really Hillman who took over. On the very next play, Hillman blasted through the San Diego defense for a touchdown and the seven point lead.

But the Chargers weren’t going to go quietly. They moved the ball to the 40, in part thanks to two Denver penalties, but Denver held its ground. Needing a stop on fourth-and-six with 1:47 on the clock, Denver got heavy pressure on Rivers who couldn’t connect with Williams and the Broncos took over on downs.

C.J. Anderson picked up a huge third-and-seven on the ensuing possession with the Chargers out of timeouts to put the Broncos in victory formation for one of the wildest finishes in recent Broncos memory.

As the insanity unfolded, the team from Mile High Sports, along with the rest of the Denver media, was there to comment, though the events that transpired almost lacked explanation at times.

If you missed the first 31 halves of the Broncos season, this is what they are. Now you wait for That One Play that usually goes their way

Looking for a change of momentum, Peyton Manning started to get loose on the sideline…

Manning is taking snaps with Paradis on the sidelines!

And on his first pass in over six weeks, Peyton Manning found Virgil Green…

Manning's first pass is a completion to Green. First down. #Broncos

And the Broncos offense had life…

All of a sudden these guys can play? Jekyll and Hyde all over again. . . #ThanksYogi

Peyton checked into a C.J. Anderson run that got the Broncos within a half yard of the end zone…

That's 100% Manning …recognized the blitz, changed the play. Would Brock have done it? We'll never know…

And for the second time in as many plays, C.J. Anderson had a touchdown taken away…

C.J. Anderson with his third ruled touchdown on this drive. This one will stick. #Broncos will go up, extra point pending.

With Chris Harris hurting on the sideline, Kayvon Webster came up big on the Chargers next possession…

Kayvon Webster with a 2 great plays, Chargers turn it over on downs

Manning showed some zip on the ball on the next possession, hitting DT on a 16-yard out…

OK, he looked healthier there, huh? A pass outside the lines AND with some zip. So, maybe the foot WAS the problem?

Denver extended their lead with a big kick from Brandon McManus…

McManus drills it. Peyton Manning has led the #Broncos to 10 points in 2 drives.

The Broncos found their way into FG range though, again putting the pressure on the defense…

McManus makes the FG. And we are tied at Mile High. 9:45 left. Wondering how this #Broncos defense will come out after that last disaster

Denver got the ball back with a chance to take a lead, but Manning got hit hard trying to make a big downfield throw…

On the ensuing Chargers drive, the new safety that’s been much maligned made the biggest play of the day…

Shiloh Keo! He makes big INT after taking nothing but heat.

Ronnie Hillman returned the favor, getting the Broncos into the end zone for the lead…

I was once despised and rejected by mankind for my belief in Ronnie Hillman. Take that, mankind. #gazbroncos pic.twitter.com/eB8sJeZHVt

But the Chargers weren’t going to go quietly…

Chargers near midfield because the Broncos like to make you scream and jump around atthe end of games. #SDvsDEN

Denver got the stop it needed, though, and the rest was just about a wrap…

After C.J. Anderson sealed the deal with a first-down run; all there was left to do was put things in perspective…

One of craziest games, craziest seasons I've ever covered. The wins, the unexpected losses, the QB controversy, all the storylines. Wow.

Talk about a day of twists & turns. Who would have thought the #Broncos would have the 1 seed and Peyton Manning would be back in action.

Five turnovers, a QB change and more injuries … but now the road to Santa Clara goes through Denver.

Nine wins by seven points or less…. certainly an unlikely path to the No. 1 seed in the AFC