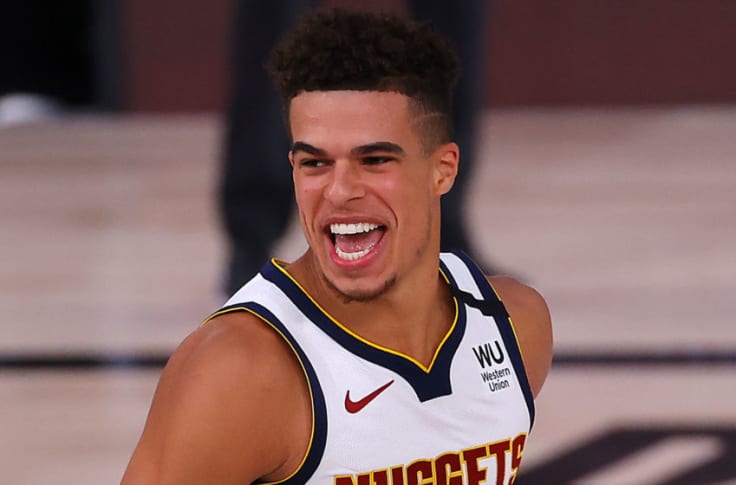 The Nuggets sweep the Grizzlies in a 120-96 win at Ball Arena on Monday night and it was an all around impressive performance. Michael Porter Jr scored 31 points on 12 of 19 shooting with 7 rebounds. Nikola Jokić scored 24 points and grabbed 15 rebounds and Aaron Gordon went 6 of 10 for 15 points.

Guys like Porter Jr, Gordon and PJ Dozier, who scored a career high 23 points in his first NBA start Saturday night, along with the bench have been taking some of the pressure off Jokić as of late and he’s no longer needing to take over games unless he absolutely has to. He only played 1:58 minutes in the fourth and watched the rest of the game from the sidelines.

“I think they’re trying to play the right way,” Jokić said of his teammates who have stepped up since Jamal Murray’s injury. “They’re playing great. Shaq [Harrison] was really good. I thought Austin [Rivers] was really aggressive.”

He also appreciates the fact that they don’t have to impact the game by just scoring. Their effort on the defensive end has been setting the tone which was exactly what Michael Malone was most proud of. The Nuggets held the Grizzlies to 34 of 81 shooting from the field and 4 of 32 from long range.

“The second half was tremendous,” Malone said. “I really thought the key stretch was the end of the third quarter, start of the fourth quarter. We were on a 20-4 run with our whole bench in the game and I thought those guys played terrific on both ends.”

Another impressive stat was Denver’s 12 assists to zero turnovers in the second half, against a team who’s third in the league in assists.

The last time the Nuggets faced the Grizzlies, it was a double overtime thriller so they knew they’d have their hands full with this young athletic team and they did for the first two and a half quarters.

The Nuggets opened the game with a 13-9 lead and then went scoreless for three minutes. The Grizzlies took a 17-15 lead with 3:28 left in the quarter but after a timeout Denver regained the lead 21-18 to end the quarter. Jokić put up 8 points and 8 rebounds in the first while Ja Morant had 7 points for the Grizzlies.

Third quarter, Denver extended its lead to 10 points with Facu Campazzo getting in on all the action. He got a steal and a bucket and then a behind the back pass to Porter Jr for a three. The Grizzlies had an answer and went on a 6-0 run to get within 4 points. Denver called a timeout and took all the momentum back going on a 15-2 run to close the quarter with the 85-75 lead.

The Nuggets held the Grizzlies to just 22 points in the third quarter on 1 of 9 from three and forced 5 turnovers. Denver had zero turnovers in the quarter.

Fourth quarter, Paul Millsap put on a clinic scoring 9 of his 12 points in just under 6 minutes. Porter Jr. continued to go off scoring 9 of his 31 points in the quarter but it was the Nuggets’ defense that helped them run away with this one. They outscored the Grizzlies 35-21 in the quarter and shot 64 percent from the field while Memphis shot 39 percent from the field and went scoreless from the three-point line.

Denver is now 22-10 at home and 13-3 since Gordon’s arrival. There’s no timetable yet for the return of Will Barton and Monté Morris who are both out with hamstring injuries but the team is holding it down without them. Malone said a lot of people counted them out but as long as the Nuggets believed in themselves that’s all that mattered.

“I know that with all of these injuries that we have had people outside of this group say that this team is done, their season is over, they got no chance,” Malone said. “Which is understandable but when you know this team, I love all of these guys. They bring it every night. They continue to fight. They continue to believe in themselves and more importantly believe in each other.”

Gordon, who has only been with Denver for 16 games, has learned a lot about this organization and their willingness to do whatever it takes to win games.

“We’ve got a lot of depth,” Gordon said of what he has learned about this Nuggets team. “Well coached, well run and when we execute and follow the game plan we give ourselves an opportunity every night. We have people that can step in night in and night out and it’s really collective effort playing off of Jokić.”

Despite losing their star guard Jamal Murray, the goal is still to win the championship and the Nuggets believe that goal is still possible. They have won 6 of their last seven games and have 11 more games to finish off the season.

They host the Pelicans on Wednesday night and are comfortably sitting in fourth place in the Western Conference standings.