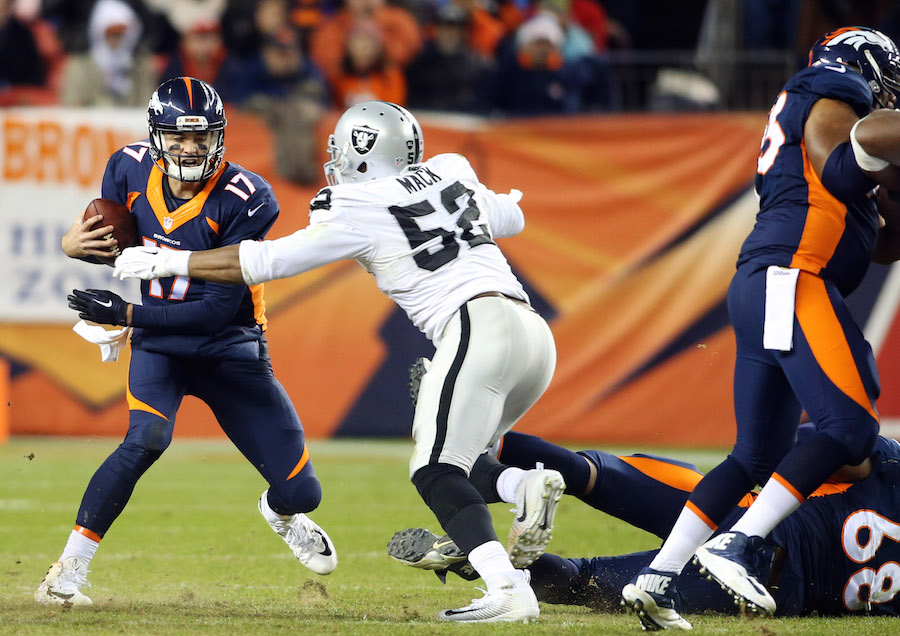 The Denver Broncos just can’t seem to separate themselves from their opponents on the scoreboard. Other than the Green Bay Packers 29-10 victory, they have allowed the opposition to hang on to hope and make the fourth quarter interesting each week. This Sunday was no different, except instead of holding onto a narrow lead, they watched it disappear.

A lopsided time-of-possession and another impressive, smothering performance by the defense was not enough to climb out to a large enough lead. At halftime the Broncos led 12-0 following four Brandon McManus field goals and three unsuccessful red zone trips. The game turned upside-down quickly as the sun set at Sports Authority Field at Mile High Stadium. The home team literally and figuratively fumbled the game away, losing to the Oakland Raiders, 12-15.

The Broncos played an entire half of football like they were destined to win the game regardless of the absence of touchdowns. That mentality, which had yet to cost them a game, caught up with them quickly. Following a Demaryius Thomas fumble, several traded punts with the Raiders, a safety, the Broncos relinquished their lead and the game.

With a 12-9 Broncos lead, Emmanuel Sanders sat under Marquette King’s ninth punt of the evening and the sure-handed returner could not bring the ball in. He attempted to jump the ball as it bounced away from him but it ended up in Raiders long snapper, Jon Condo’s hands. It gave the Raiders their third-straight offensive drive and they quickly capitalized.

From inside the red zone, Carr tried three passes on the vaunted Broncos defense and converted on a lengthy 3rd-and-15. The Raiders tight ends seemed to be their only real source of success throughout the day and Rivera breezed by Darian Stewart for their second touchdown of the day. After a failed two-point conversion the Raiders took the 15-12 lead with 14:26 left in the contest.

The entire momentum of the game had shifted to the Raiders despite their lack of success on offense. Big plays changed the game and the Broncos offense failed to move the ball the entire second half.  After four failed second half drives, the Broncos reached McManus’ field goal range with 14:26 left in the contest. He kicked the 49-yard attempt and it had more than enough distance but it found the left upright square and fell to the ground no good.

The Raiders offense was primarily also unsuccessful, amassing only 126 net yards the entire day but a 21-yard pass to Walford set up a 43-yard Sebastian Janikowski field goal to go up six points. It went wide right and gave the Broncos a glimmer of hope.

That hope was dashed just minutes later. The Broncos showed their desperation with 3:50 left on the clock, from their own 38 yard line they attempted a pass to Vernon Davis on fourth down. The ball was placed in his hands and he would have had room to run but Davis took his eyes off the ball and it slipped through his hands. It was a microcosm of their second half woes and they would get no closer to tying the contest.

After another failed Broncos drive that ended in Mack’s fifth sack of the game, Carr came on for the victory formation and kneeled the ball three times and the Raiders trotted off the field with the win.

The Broncos defense played amazingly well once again. They allowed the Raiders to get on the scoreboard on their first drive of the second half. The nine play, 80 yard drive was aided greatly by a Rivera 29-yard catch, a Walford 21-yard grab and was capped with a 3rd-and-6 fade route to Seth Roberts over Bradley Roby, making the score 12-7.

The Broncos offense continued to struggle in the red zone as they have all year, entering the game ranked 25th in red zone touchdown percentage. They found themselves near the end zone three times, gaining 224 yards on eight first downs in the first half and convert none of them into touchdowns.

The running game struggled to get going all game. Ronnie Hillman and Juwan Thompson combined for 28 yards on 17 carries. Osweiler was solid in the first half, completing 22 of 29 attempts for 199 yards but missed on three throws in their final red zone trip of the game. In the second half the offensive line got consistently man-handled by Mack in particular and Osweiler only completed 13 of his last 22 throws and finished with a passer rating of 84.4.

Mack was a one-man wrecking crew, his five sacks accompanied his forced fumble that resulted in the third safety that brought the Raiders within three points with just over a quarter to play.

The Broncos defense, for the seventh time, held their opponents to under 20 points. At halftime the Raiders had shockingly put up -12 net yards. Von Miller recorded his 10th sack of the season and Derek Wolfe and Shaquil Barrett each added another. The 126 yards gained by the Raiders is the lowest total they have allowed all season and Carr only completed 12 of 29 passes for 135 yards.

The Broncos failures in the red zone were known long before Sunday but their luck ran out. The Raiders surely were the inferior team but lack of execution on offense and a fumbled punt finally cost the Broncos a victory. Whether it is Osweiler, Peyton Manning or even Trevor Siemian under center, they have to find a way to score points. They squandered another wonderful performance by the defense and made the next three games far more important than they would have been if they took care of their division rival Raiders. Instead, they need to go back, again, to the drawing board and reinvent their offense for where it matters, the red zone.