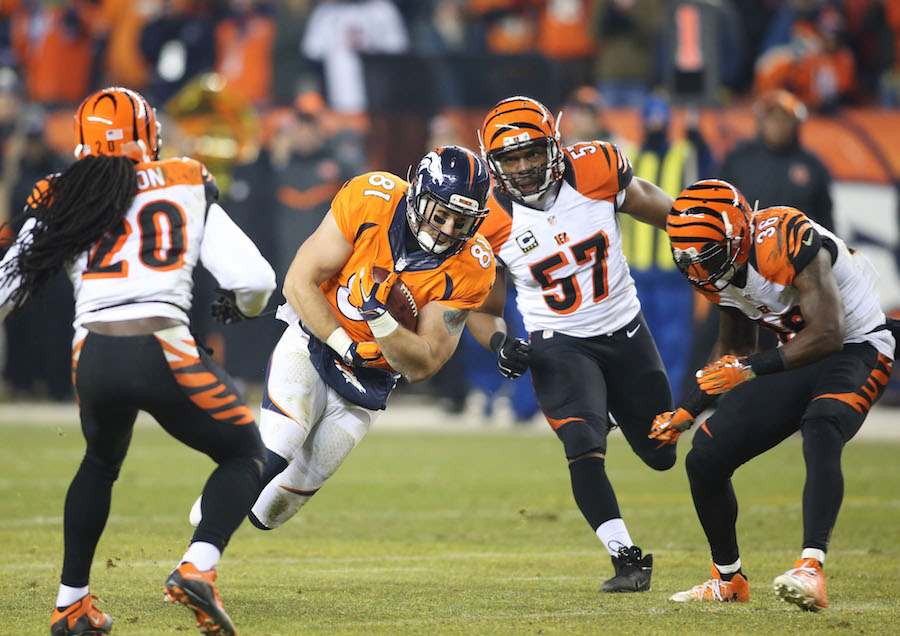 The home team was unrecognizable. The Denver Broncos defense that was so feared through three months of the season was on its heels; it looked soft, weak and indifferent and the Bengals, led by A.J. McCarron in his second career start, were taking advantage, jumping out to a 14-0 lead. Its was nearly unwatchable but luckily halftime was their savior.

The Broncos offense, which held the ball for just 8:46 of the first half and mustered only a late second-quarter field goal, made the adjustments the team and fans alike were hoping for at the break the last few weeks and got back in the game. The epic 20-17 win, that ultimately took overtime, was not easy and featured a plethora of Broncos across the entire team, to once again, steal a victory from the jaws of defeat.

The game that featured two young, suddenly leading signal callers came down to one getting the better of the other late in prime time. The Broncos resolve was tested to the absolute limit at the end of regulation.

Brock Osweiler dialed up some impressive passes with only 1:40 left in the fourth quarter. He completed passes for chunks of 16, 26 and 13 yards to set up a potential game-winning field goal with only four seconds remaining. He even dove at the right hash to set up Brandon McManus’ 41-yard attempt. The kick was never close, shanking nearly twenty yards to left of the left field goal post. It was a shock to the team and all 76,868 in attendance, but it didn’t sway either’s resolve.

On the Broncos first drive of overtime they quickly found themselves in a precarious situation. On third-and-10, Osweiler found Daniels and proceeded to throw strikes down the field to several targets to, again, get in scoring range. Demaryius Thomas used his big frame and a second effort to make the next scoring attempt as close to a “sure thing” as possible.

McManus, who missed his seventh field goal of the season by a wide margin just minutes earlier, nailed his 37-yard attempt as the fans held their collective breath. The 20-17 lead would be all they needed. McManus’ kick placed the responsibility back on the defense’s shoulders where it had rested most of the season and yet again, they came up with the final deciding play.

The Broncos defense took just two plays to send the fans into a frenzy and clinch their 22nd postseason berth. Von Miller appeared to have caused the game-winning turnover on the first play of the Bengals’s overtime drive when he hit McCarron’s right arm as it cocked back to throw. The ball fell to the ground and was called an incomplete pass. It was upheld after review despite appearing to be a fumble.

It would be of little consequence because on the very next play, Miller’s close friend and teammate DeMarcus Ware, jumped on a bouncing ball after a muffed snap by McCarron. The game was over and once again the defense came up big.

The win was ugly and almost entirely in doubt Monday night. The Broncos took their first lead with 11:27 left in the game on a magnificent 39-yard C.J. Anderson touchdown run to the left side, reminiscent of the New England Patriots win. But on Monday it didn’t end the game and fans wouldn’t sit down for the rest of the game.

The Bengals responded and tied the contest at 17 on a 52-yard Mike Nugent field goal. The Broncos crossed the fifty yard line once again and were driving while eating up precious clock. But the hero Anderson suddenly turned goat, fumbling the ball away with 4:12 left in the contest. Fortunately for Anderson, it ultimately did not cost the Broncos the win. The defense simply was not ready to let another win slip away and secured another stop to set up McManus’ miss.

The Broncos won another game in spectacular fashion and it certainly did not look good for the home team at halftime. It was not easy and certainly was not pretty but very few of the Broncos 11 wins have been.

The Broncos only momentum at halftime came from a 23-yard field goal by McManus, just before halftime. The Broncos entered the break with little to fuel their confidence. The Bengals early 14-point lead came on drives of 15 and 13 plays respectively, which chewed up an astonishing 21:14 of the first half. At halftime the seemingly small lead looked insurmountable as the defense allowed the Bengals to convert 7 of 8 third downs, pass for 119 yards and run for 85. Conversely, the offense only mustered 89 net yards on five first downs in three possessions in the half.

If the Broncos came out of the half as they have in the past three games, scoring zero points, it would be another loss and a possible dagger to the heart of their season. But they fought their way back with some great halftime adjustments.

They came out with a quick touchdown out of halftime in just 4:40 with eight pass completions and one run up the middle by Anderson. After putting themselves in a familiar corner on third down from the 8-yard line, Brock Osweiler moved with the pocket to his left and delivered a low, quick pass to Emmanuel Sanders who raced in for the score and brought the crowd back to life. The 14-10 Bengals lead with 10:20 left in the the third quarter was the first time in the contest that the Broncos showed real life and turned out to be the turning point.

The turnaround for the Broncos came on both sides of the ball. In the first half, McCarron completed 12-of-17 passes, aided by 21 runs for a 4.0 yard average. In the second half they gained only 90 more net yards and scored just the one field goal to send the game to overtime.

In the second half, whenever the Bengals completed a pass, the Broncos would respond with a signature big pass break up. Despite the Broncos rough start and Green’s 57 first-half receiving yards and touchdown, they stayed in man-coverage mostly, mixing in some zone looks. Bradley Roby, Chris Harris and Aqib Talib stood up to the second half challenge. Green did not have a second-half catch and only tight end Tyler Kroft made a second half impact.

The defense also held up against the Bengals rushing attack, allowing only 23 second half rushing yards. Danny Trevathan lead the team with 12 tackles and Derek Wolfe and Vance Walker each tallied a sack.

Osweiler came into his own and appeared most comfortable when the game was truly on the line. McCarron had certainly outplayed Osweiler through the first half, but finished with an average quarterback rating of 87.8 on 22 of 35 passes and one touchdown. Osweiler, who completed 7 of only 8 passes in the first half finished with 27 completions on 39 attempts for 299 yards, a touchdown and a passer rating of 100.3.

Thomas caught the most passes with seven for 59 yards, but it was Daniels that helped Osweiler truly seal the win. He finished the day with a team-high 70 receiving yards and caught some pinpoint passes in high traffic on third down and late in the game.

The win, like eight of their 11 this season, came by just one score. But none of those other seven wins were bigger than Monday night. The win placed the Broncos in the playoffs and got the team back on track after two demoralizing losses due to epically bad finishes. It took overtime for the Broncos keep their hopes for a championship alive. It is, as they say, “its not how you start, its how you finish.” The finish took an extra try in extra time late Monday and it couldn’t have been more riveting or more needed in the Mile High City.