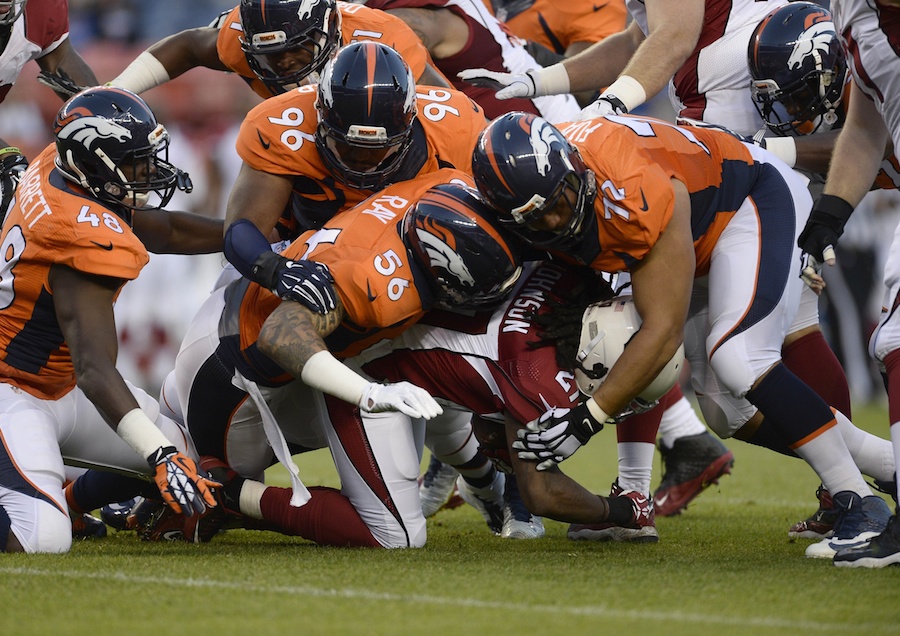 The Denver Broncos are a mere five days away from playing football that counts.

But it’d be silly to pretend like the preseason didn’t just happen. We can’t ignore what has been learned over the last month. A few guys really stood out and a few guys played poor enough to either be flat out cut or cause some serious concern.

With that in mind here are three studs and three duds from the Broncos preseason.

Barrett was a beast leading the team in tackles with 16 in the preseason and racking up a silly four sacks. He played himself onto the team and will contribute some in 2015; he’s a nice piece for the future.

Latimer was still on the field late in the Arizona game, which is never a good sign in preseason contest No. 4. With Bennie Fowler and Jordan Norwood emerging he needs to start making plays quickly.

If you told me at start of camp that Ronnie Hillman moves up to #2 back & Montee Ball gets waived, I would have said you're nuts! #Broncos

But that’s exactly what happened. Hillman seems like a perfect fit in Gary Kubiak’s scheme and really excelled in the preseason rushing the ball 21 times for 155 yards. That’s 7.4 yards per carry! Watch out, C.J. Anderson.

McManus failed again with the lights on bright. Yes, it was 50-plus yard kick, but it was with the game on the line against the Cardinals and he missed it; it wasn’t close. Is this the 2014 McManus all over again?

Ray lived up to the hype in the preseason and then some. The stud from Missouri racked up 11 tackles, 2.5 sacks and two forced fumbles. The Broncos got a steal on draft night and Ray is a monster.

The #Broncos have release RB Montee Ball, they announced. He would’ve been their fourth RB

This is just so disappointing. Not only did the Broncos have to finally admit Ball was a bust after a horrible preseason (32 carries, 68 yards) but Eddie Lacy was there when the team took Ball. Ugh.