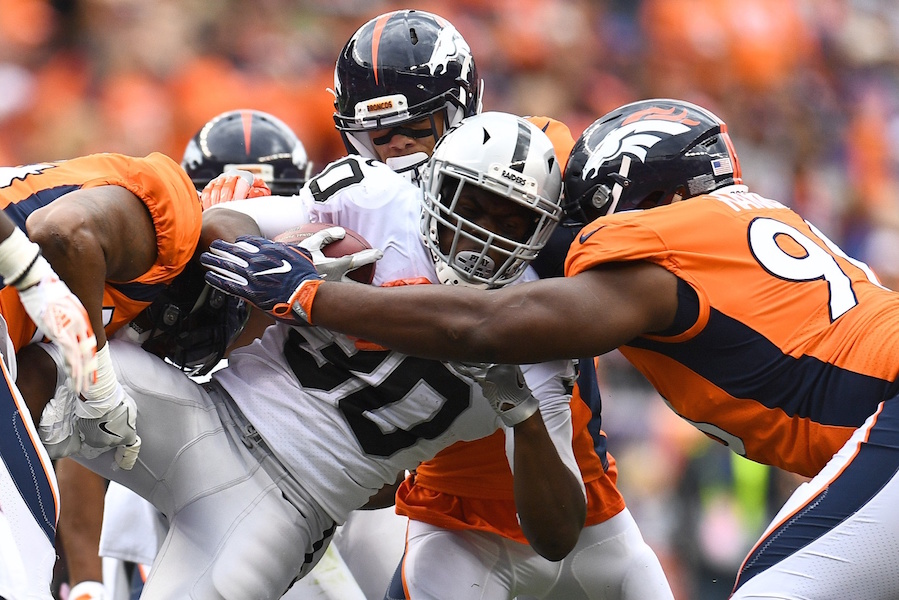 The Broncos secured their third victory of the season, beating AFC West division rival Oakland by squeezing out a 16-10 victory on the back of another strong performance by the run defense.

It remains to be seen whether the Broncos have the makings of a true playoff team yet, but the way the defense is playing now makes it hard to argue that they aren’t.

First-year defensive coordinator Joe Woods had spent all offseason improving a defensive front that finished 2016 with the 27th-ranked run defense. That work appears to be paying off, as the Broncos run-stopping unit has put together an outstanding start to the 2017 campaign against some stiff competition.

During their Week 4 AFC West showdown with the Raiders, one of the Broncos’ keys to victory was going to be stopping “Beast Mode,” aka Lynch. Not only did they stop Lynch, they made a statement that the Broncos’ defense is most definitely back to performing at an elite level.

Lynch finished the game with only 12 yards on nine carries for an average of only 0.75 yards per. His longest run of the game was a measly four yards.

Led by offseason acquisition nose tackle Domata Peko and defensive ends Derek Wolfe and Adam Gotsis, the entire Raiders’ running game was shut down. Lynch and fellow running back Jalen Richard struggled to find any room to run and were constantly hit in the backfield before even reaching the line of scrimmage.

Peko in particular had a stellar game, using his size and brute strength to power his way past double-team blocks and making his presence known in the Raiders’ backfield. Darian Stewart took advantage of the opportunities, finishing the game with five solo tackles and two assists. Inside linebacker Brandon Marshall also helped the effort against the run, posting three solo tackles and three assists.

Once the Broncos successfully prevented the Raiders from establishing any sort of run game early, the Raiders were forced to throw the ball to generate any momentum on offense.

In case you hadn’t noticed, that’s exactly how the Broncos are built to win games.

After facing constant pressure all game, Raiders quarterback Derek Carr was injured on a sack by Wolfe and was ruled out for the remainder of the game. It wasn’t long before the rest of the Broncos’ defense swarmed Raiders’ backup quarterback EJ Manuel, with safety Justin Simmons finishing the game with an interception late in the fourth quarter.

The team’s performance was far from perfect, as the offense sputtered throughout the second half once again and allowed the Raiders to remain in the game far longer than they should have. Regardless, the team is sitting at 3-1 and is currently in sole possession of second place in the division. There is clearly work to be done on offense in Denver for this team to compete for a playoff spot in what looks to be a very tough AFC.

For now, no matter the score or the game film to be reviewed, let’s all just raise our glasses to a No. 1-ranked run defense, and more importantly, a victory against the Oakland Raiders.