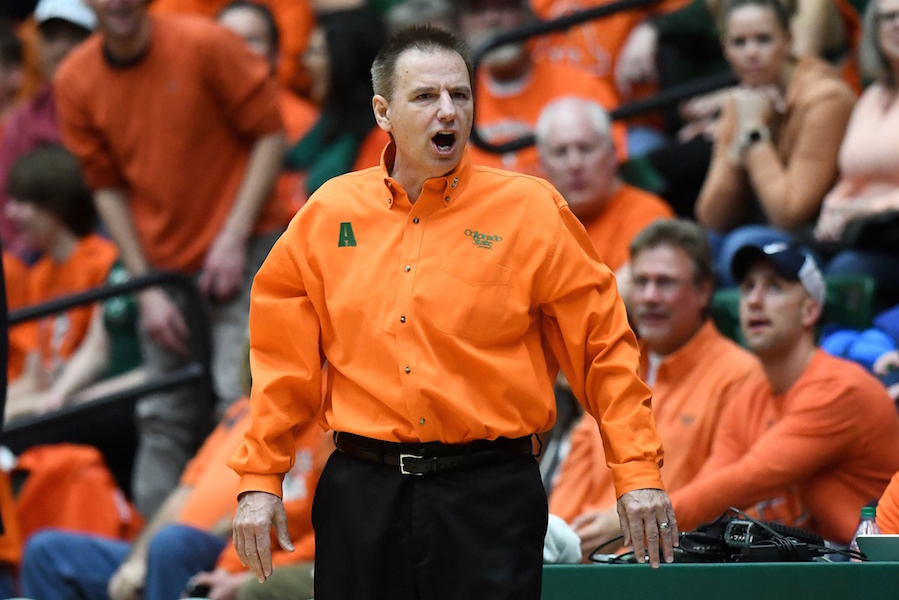 The Colorado State men’s basketball team could not hold on to its late lead and dropped a 79-74 Mountain West contest to visiting UNLV, Jan. 20. With their fourth straight home loss, the Rams slipped to 10-11 overall and 3-5 in Mountain West play, while the Runnin’ Rebels improved to 14-5 overall and 3-3 within the Mountain West.

After the two teams were tied at 36 at the halftime break, they continued their tight battle throughout the majority of the second half, with the Rams leading from the 16:04 mark until the final minutes. Playing without junior guard Prentiss Nixon due to injury, CSU built as much as a nine-point lead in the second half on three separate occasions, the final coming at 74-65 with 3:42 remaining. However, that lead would not last, as UNLV scored seven points on the next three possessions to cut the lead to just two at the 2:23 mark. The Runnin’ Rebels then tied it on Jovan Mooring’s two free throws with 1:18 to play and took the lead for good on his three pointers with 29 seconds remaining. After a missed three attempt to tie it, Jordan Johnson hit a pair of free throws to seal CSU’s fate.

In a game that consisted of seven ties and 12 lead changes, including eight lead changes in the first half alone. The largest lead of the opening 20 minutes was five for UNLV, including at 36-31 with 1:12 remaining. However, CSU was able to go on a 5-0 run on a three by redshirt-junior J.D. Paige and a pair of free throws by redshirt-sophomore Raquan Mitchell to close out the first half and tie it at 36 at the intermission.

The Rams had four players score in the double digits, led by Paige’s 19 points on 8-of-14 shooting from the field.  Mitchell added a season-high 17 points off the bench to go along with a season-best seven rebounds. Junior Deion James and senior Che Bob chipped in 14 and 12, respectively. Redshirt-sophomore Nico Carvacho led the Rams with 16 total rebounds, including seven offensive rebounds. UNLV was led by forward Shakur Juiston’s 19 points and eight rebounds, while Mooring added 17 points in 32 minutes of play.

Next up, Colorado State will travel to California to take on San Diego State, Wed., Jan. 24 at 9 p.m. MT. The contest between the Rams and Aztecs will be televised on CBS Sports Network with Carter Blackburn handling play-by-play, former Virginia coach Pete Gillen doing the analysis and John Schriffen on the sideline duties. The game will air across the Colorado State Sports Network (along with online at CSURams.com), with Brian Roth and Adam Nigon on the call.