For most of July 1st, it looked like your typical first day of free agency for the Colorado Avalanche. They signed some depth players to reasonable contracts that didn’t hamper them long term and looked like they were going to call it a day. Joe Sakic even had his yearly conference call, where he announced the team is “probably” done for the day. However, fans were wondering what else Sakic had up his sleeve. Surely he couldn’t enter another season without getting his big three up front some dependable help? 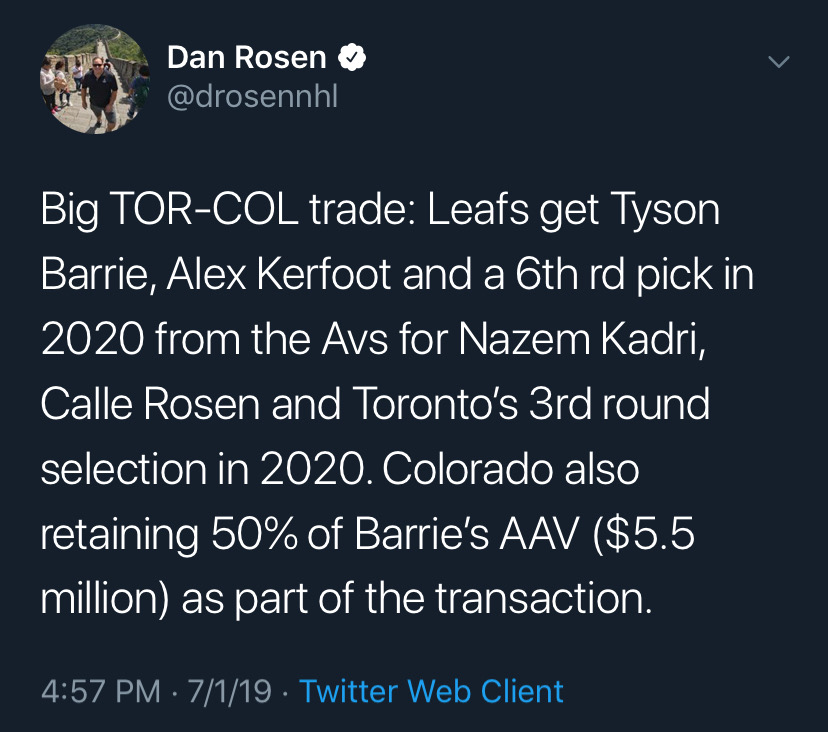 With one trade, Joe Sakic made one thing very clear: The time to win is now.

For two straight seasons, the Avalanche have managed to sneak into the playoffs despite not having a clear second-line center behind Nathan MacKinnon to ease the pressure. This Spring, they were just one game away from making it to the Western Conference finals. However, it was clear secondary scoring up front was necessary to take that next step.

Prior to this trade Sakic had been a busy man, but it appeared he was just shuffling the deck chairs. He traded away last year’s second-line center, Carl Soderberg, for a depth defenseman in Kevin Connauton and a third-round pick. Just a few days later, he would deal that pick and a second-round pick to the Washington Capitals for 24 year old forward Andre Burakovsky. The young Swede had seen his ice time dip every year since coming into the league and was looking for a fresh start. The Avs are banking on him looking more like the 20 year old that scored 38 points in his first full season in the NHL.

On July 1st, the Avs continued to make a few small moves with the roster. They extended veteran Colin Wilson for one more year. They snagged penalty-killing specialist Pierre-Édouard Bellemare to bring stability to the fourth line. Their biggest move of the day was looking to be the four year contract they gave former Sharks forward and analytics community darling Joonas Donskoi.

All of these moves on their own were fine. Put them all together, and you were left wondering: Is this team really any different than the team that just barely snuck into the playoffs a few months ago?

The 28-year-old center had seemed to reach the end of his tenure in Toronto after finishing the last two playoff runs in the press box due to suspensions. Fans were over it and the Leafs, in a cap crunch, had an excuse to move him. Plus, the signing of John Tavares last summer meant that Kadri was a bit of a luxury for them on the third line. In the two seasons prior to the Tavares signing, he had scored a combined 64 goals and 116 points, all while driving opponents mad with his tenacious playing style.

With Kadri, Sakic addressed a glaring need and did so by acquiring a player locked up to an extremely team friendly contract. With just a $4.5 million cap hit for the next three seasons, Kadri is a tremendous bargain for how valuable he is. When you combine that with Nathan MacKinnon, who has arguably the best contract in the NHL at $6.3 million per season, the Avs only have to worry about their top two centers taking up about 13% of their cap space next season. Given their production (128 goals combined in the last two seasons), that type of value is almost unprecedented in this cap world.

Having your top two centers making only a combined $10.8 million for the next three seasons brings on a sense of urgency and shows a belief that the window to win is now. With the acquisition of Kadri, fans can take a step back and see how each decision aligns. With a clear second-line center, those depth players no longer have the pressure to be extend beyond their expected output.

Solidifying the team’s core and depth gives the Avalanche another advantage. Sakic’s salary cap management has set the team up with very little worry about losing that core. Mikko Rantanen’s anticipated big contract this summer is of almost no concern due to how much flexibility the Avs will have. Now, this sort of flexibility won’t last forever which emphasizes the “win now” mentality even more. The star players are in the primes of their careers and the roster only features three players over the age of 30. It’s go time.

Make no mistake, the Avs will miss Tyson Barrie. In trading him, the team is handing over the defensive reigns to Cale Makar, Samuel Girard and Bowen Byram. There will be an adjustment period in replacing Barrie’s production. With those young defensemen at his disposal, Sakic recognized a need at center and used Barrie, one year away from unrestricted free agency, to attack that weakness.

The aggressiveness from Sakic has made one thing very clear: the window to bring a Stanley Cup back to Colorado starts now.