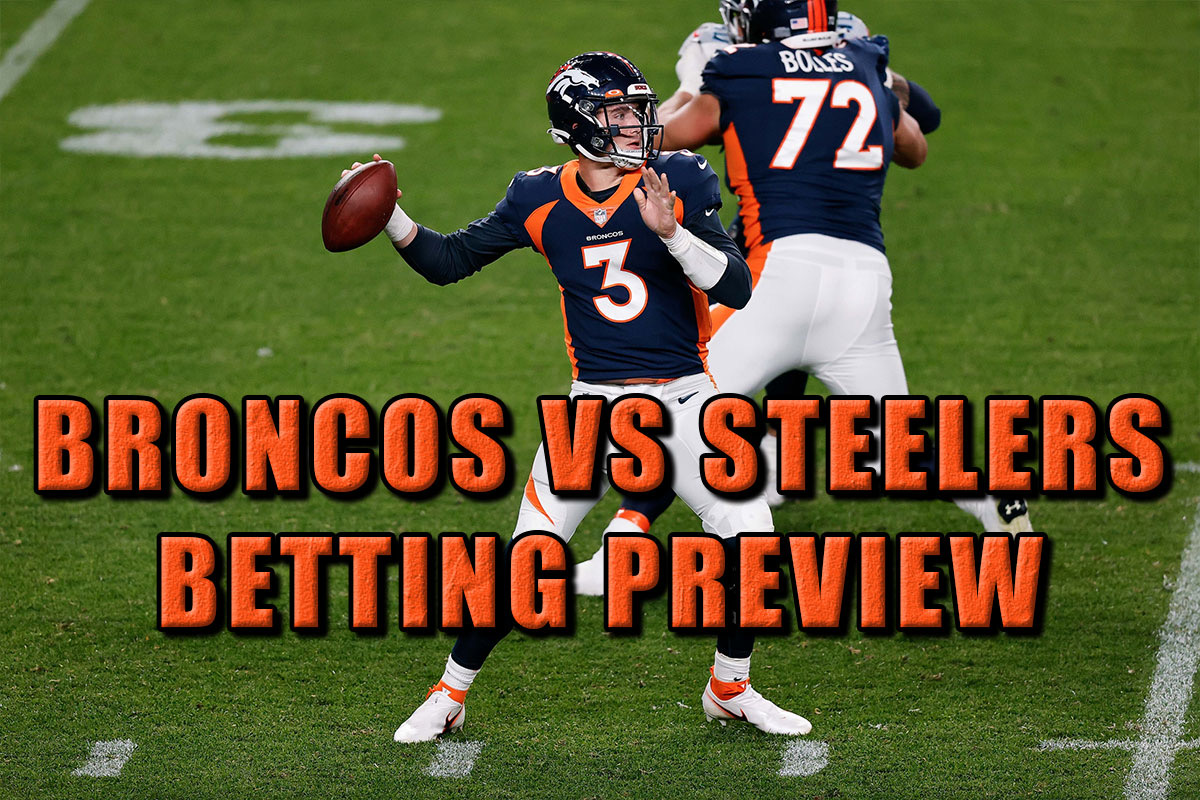 It was a tale of two Monday nights for the Broncos and Steelers in Week 1 as Denver suffered a gut-punch loss to Tennessee, while Pittsburgh looked the part of an AFC contender in the wake of a solid road victory at New York.

Will these two teams experience a reversal of fortunes in Week 2, or will it be more of the same? Let’s get into it with our Broncos vs. Steelers betting preview with odds, picks, and predictions.

Click here to get $1,000 in free bets and 100-1 odds on the Broncos vs. Steelers (or any NFL game) game with DraftKings Sportsbook.

The Broncos benefited from four missed field goals by Tennessee kicker Stephen Gostkowski, but they needed one more miss with 17 seconds left to escape with a Week 1 win, and they didn’t get it.

Denver had plenty of opportunities to spring the upset, but the frustrating defeat was instead highlighted by three failed opportunities to score from Tennessee’s one-yard line, and a head-scratching decision from head coach Vic Fangio to keep his timeouts as the clock ticked away. Ultimately, holding a 14-13 lead in the fourth quarter, the Broncos defense buckled on a 12 play drive spanning 83 yards that was capped by the Gostkowski dagger.

Gostkowski nails the FG and the Titans beat the Broncos, 16-14

Because Fangio neglected to use his timeouts as the Titans wilted away the clock, they were left without enough time to respond. In every sense, it was a puzzling loss for the Broncos.

Still, there were plenty of things for Denver to feel good about, including the play of Drew Lock, who completed 66% of his passes and didn’t turn the ball over against a solid Titans defense.

He will be tested in this one against an elite Steelers defense that racked up three sacks and held Giants running back Saquon Barkley to an astonishing six yards on 15 carries in Week 1.

Offensively, Steelers quarterback Ben Roethlisberger shook off some early rust in his first start in nearly a calendar year, and running back Benny Snell busted loose for 113 yards on the ground as Pittsburgh pulled away from an overmatched Giants in the second half en route to a 26-16 win.

With the stage set, let’s dive into the odds, picks, and predictions with our Broncos vs. Steelers Week 2 betting preview.

We have seen some slight movement in the Broncos vs. Steelers odds throughout the week with the point spread bouncing back and forth between Steelers -7.5 to Steelers -7.

As of Saturday afternoon, the Broncos are currently a seven-point and +250 moneyline underdog. Meanwhile, the Steelers check in as a strong -295 moneyline favorite, and the total is set at 40.5 points.

Here’s a look at the current Broncos vs. Steelers Week 2 odds:

Of course, any look at the Broncos vs. Steelers odds requires this qualifier: DraftKings Sportsbook is bringing back its popular 100-1 odds offer on any NFL games this week. New bettors at DraftKings can grab the Steelers, Broncos, or any NFL team to win outright with a $1 wager that pays $100 in profit. You can get the offer here.)

Let’s take a closer look at how the current Broncos vs. Steelers odds stack up against FiveThirtyEight’s popular ELO model.

According to ELO, the Steelers should be a six-point favorite and possess a 70% chance of winning the game. In relation to the current sportsbook market prices, the Broncos are actually getting one-full point of point spread value, and, notably, that point falls across the key numbers of six and seven.

Of course, this does not mean that the Steelers are the wrong play, but it does suggest that Pittsburgh is perhaps a bit juiced up here, and if you believe in shopping value, this comparison is worth noting when examining the Broncos vs. Steelers odds.

Let’s take a quick look at the Broncos-Steelers betting splits.

As of Saturday afternoon, 42% of all spread bets and 51% of the money backs Denver, so this one is drawing relatively split action across reporting sportsbooks. Moreover, 61% of moneyline bets and 11% of moneyline handle is on Denver. While that seems like a drastic variation, keep in mind that Steelers moneyline bets require a far more significant risk to gain a meaningful return.

As for the total, bettors are on the under with 54% of total bets and 75% on this side, helping explain why we’ve seen the number dip under 42 this week.

How to Watch Broncos vs. Steelers

How to Bet on Broncos vs. Steelers

Last week, Colorado sports bettors had the opportunity to legally wager on a Broncos game. There were several outstanding new user promo offers on the board, but if you missed those deals, there is some good news as several aggressive offers are out there to be had ahead of Week 2 action.

As noted above, DraftKings has any NFL team to win in Week 2 (along with its $1,000 of free bets). You can get these offers by clicking here.

Meanwhile, FOX Bet Colorado has $1,000 of free bets and a double your money promo if the Broncos score on Sunday. While Pittsburgh’s defense is good, a shutout seems improbable, so get that offer here.

Ben vs. The West

Ben Roethlisberger has quarterbacked many big wins, no doubt, but he has struggled against AFC West teams at home as a favorite throughout his career. The Steelers are just 6-9 ATS in such games.

Including their Week 1 cover over Tennessee, the Broncos are 7-3 ATS over their last 10 games.

Drew Lock is 4-2 ATS overall as Denver’s quarterback, but he’s also 3-1 ATS as an underdog.

Why Backing the Steelers Makes Sense

The Steelers are 15-10 ATS in 1 p.m. starts as a home favorite of at least seven points when Roethlisberger starts at quarterback.

The Steelers are 5-1 ATS in September in Ben Roethlisberger starts when favored at home by at least seven points.

A Word on the Total

The over is 81-62-3 in September games when both teams enter off an under in their previous games.

Despite only producing 14 points in Week 1, the Broncos offense showed some encouraging signs. Drew Lock was efficient and protected the football. Had Denver punched it in from the goal line, had Jerry Jeudy not delivered a pair of critical drops, and if the Broncos had Courtland Sutton available, it may have been a far more productive output.

That being said, Denver has to go on the road and now deal with an outstanding Steelers defense. That’s a tough ask.

I like the idea of playing road underdogs off a Week 1 loss early in the season, particularly against public teams like the Steelers, and so what I’d recommend in this situation is to watch the market and see if this number gets back to Denver +7.5. If it doesn’t, it’s worth buying a half-point. I expect Pittsburgh to win, but this is just too many points for me with a quarterback still working his way back from a prolonged absence.

I’m taking the Broncos, and backing it with a slight lean on the over.

The Broncos to score at least once (any score will do) at +100 odds with FOX Bet (get it here).

New players at DraftKings Sportsbook: Get the Broncos (or any team) to win at 100-1 odds (get it here).

Forget the Trends and Go All-In on the Over for Broncos vs. Chiefs