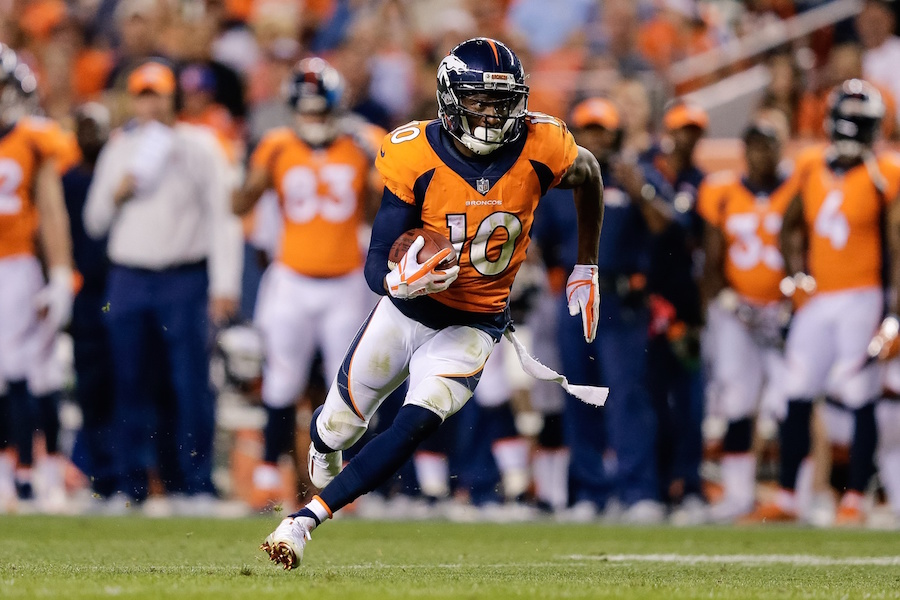 Emmanuel Sanders must feel a bit like Michael Corleone these days. Just when he thought he was out, they pull him back in.

The Broncos’ No. 1(a) receiver, Sanders was on the practice field this week returning punts and could be called on this Sunday against the Bengals in the event of a continued meltdown by the special teams unit.

The eight-year veteran has always been a “gamer” — willing to do any- and everything asked of him on the football field — but it has been more than a year and a half that Sanders was needed in the punt game.

It’s a major risk/reward scenario for first-year Broncos head coach Vance Joseph and first-year special teams coordinator Brock Olivo, especially considering Sanders’ current/recent injury status. For Sanders, it’s a very similar scenario to one he found himself in two years ago — right down to the injury.

Sanders opened the 2015 season as Denver’s punt returner with the notion that Gary Kubiak (then in his first year as Broncos head coach) wanted to put the ball into the explosive playmaker’s hands as often as possible.

“I think that you do,” Kubiak said at the time about weighing the risk/reward of putting one of his top wide receivers in such a vulnerable role as punt returner, “but I also think that you look in touches. That’s the most important thing. When you have a dynamic player like that, if there’s any other way to get him a touch on the field and he’s not a guy that, to me, needs a lot of work doing it. He’s very natural doing it.”

Isaiah Burse and Wes Welker, who shared punt duties in 2014, were gone, and to that point Omar Bolden had been handling mostly kick return duties. Sanders, who had been called on sporadically to return punts during his four years in Pittsburgh and his first year in Denver, seemed a logical and potentially game-changing choice.

The 30-year-old wideout remains a logical choice now in 2017, if only because Denver has struggled so mightily with ball security in the punt return game this season.

Rookie Isaiah McKenzie has five muffed punts (two lost) over his last five games, leading to his benching and second-year wide receiver Jordan Taylor getting the nod against Cincinnati. It will be Taylor’s first regular season opportunity on the punt unit. Given his inexperience, it’s no surprise Joseph and Olivo had Sanders back fielding punts this week in practice as a precaution.

For all his speed and playmaking ability, Sanders is also an incredibly smart player. In 2017 he returned a total of 17 punts for 103 yards with a long of 14. He fair caught fair caught 20 punts in his direction.

Compare that to McKenzie, who has more fumbles in 2017 than fair catches. The rookie may be more explosive, as evidenced by his 186 yards on 20 attempts (including returns of 20, 29, 31 and 44 yards), but his increasingly frequent drops forced Joseph and Olivo to make a change.

Sunday’s matchup against Cincinnati is a game the 3-6 Broncos can’t afford to give away. Should Taylor stumble early on, don’t be surprised if Sanders gets the call — especially against a beatable Bengals team.

The risk, of course, with Sanders is that he opens himself up for risk of injury with unobstructed defenders routinely barreling towards him in the punt game. That would be a frightening prospect for a healthy Sanders — one of Denver’s few big-play threats on the offensive side of the ball — let alone a Sanders who is still recovering from an ankle injury.

Sanders had a big game against New England last week, despite Denver’s poor overall performance on offense and despite his lingering injury.

“In my opinion, he was one of the best players on the field on Sunday night,” Joseph said this week. “He couldn’t be covered and he made a lot of big plays for us. But that’s him every day. A guy who’s been nicked for over three weeks for an ankle at receiver, that’s tough to come back and play at a high level, but he’s done that. He’s worked and practiced, even when he wasn’t healthy he’s been full speed for us in practice. I wasn’t surprised to see him play well on Sunday.”

Sanders was in a very similar situation in November 2015 against the Patriots.

Kubiak had moved away from Sanders as the primary punt returner following Week 8 in 2015, as Denver was cruising at 7-0 and Bolden was becoming more comfortable in the role, but had to go back to him when ball security became an issue. Additionally, Sanders was recovering from an ankle injury that caused him to miss the Week 11 game against the Bears and was questionable against New England. He came up with one of his biggest performances of the year, however.

Sanders wasn’t perfect down the stretch splitting time with Bolden, who was also battling an injury (hamstring). Sanders muffed and lost a kick in a loss to the Raiders, but he rebounded with a pair of fair catches in that game. He saw some action in the punt return game the following week against the Steelers, but Kubiak eventually turned those duties over to Shiloh Keo and Jordan Norwood.

“It’s a shame that happened to him because there’s nobody that I trust more as far as his hands,” Kubiak said the week following the Oakland loss. “He’s not shown one time in practice that was going to be an issue. It was just an unfortunate thing and there’s nobody that feels worse about it than him.”

That was a similar sentiment Joseph had about McKenzie, though, in the weeks leading up to the rookie’s benching.

“His confidence is okay,” Joseph said after the loss to Kansas City in Week 8. “After dropping the ball on Monday night, my instinct was to take him out. But, that wouldn’t have been right for Isaiah. Putting him back in and making him perform on Monday Night Football in a tight game was right for his future. That’s what I did and he caught the ball. It worked out for us. He has to possess the ball first. That’s his job. It’s a hard job, but that’s his job — possessing the ball first. It’s a must.”

McKenzie had a season-long 44-yard return in a blowout loss to the Eagles the next week, but the lost fumble against New England on the first punt of the game was the straw that broke the camel’s back.

Now, Sanders now is prepared to shoulder that load in the event Taylor stumbles even in the slightest.

Any action he sees in the punt game this year would be the first since that 2015. Beyond his willingness to get back out there as punt returner, he’s also working closely with McKenzie to help the rookie rebound when his opportunity comes around again.

“I told him he needs to fair catch,” Sanders said. “I told him I said, ‘Seven games you haven’t fair caught it.’ Isaiah has a heart of gold. Good player, special player, he’s just young. I remember it was me and [Steelers WR] Antonio Brown with the Steelers the year we went to the Super Bowl. We both were rookies and we didn’t get back there. I told [McKenzie], I said, ‘You’re a special player, we look up to you. You’re a rookie, but at the same time you have to learn how to play the position.’ That’s my job to teach him that. I tell him, ‘Sometimes you can’t sit up there and try to hit the home run every time. You have to fair catch.’ I think that he’s learning that and he’s seeing it. We’re watching film together, we’re doing certain things and I’m trying to just bring the best out of him. I think that right now it’s not looking good for him, but you give him another chance after we get done talking and break down the film—what to do and what not to do. I think he’s going to be all right.”

Even when it seems that he’s just about out, Sanders is all in on helping his team in the punt game.