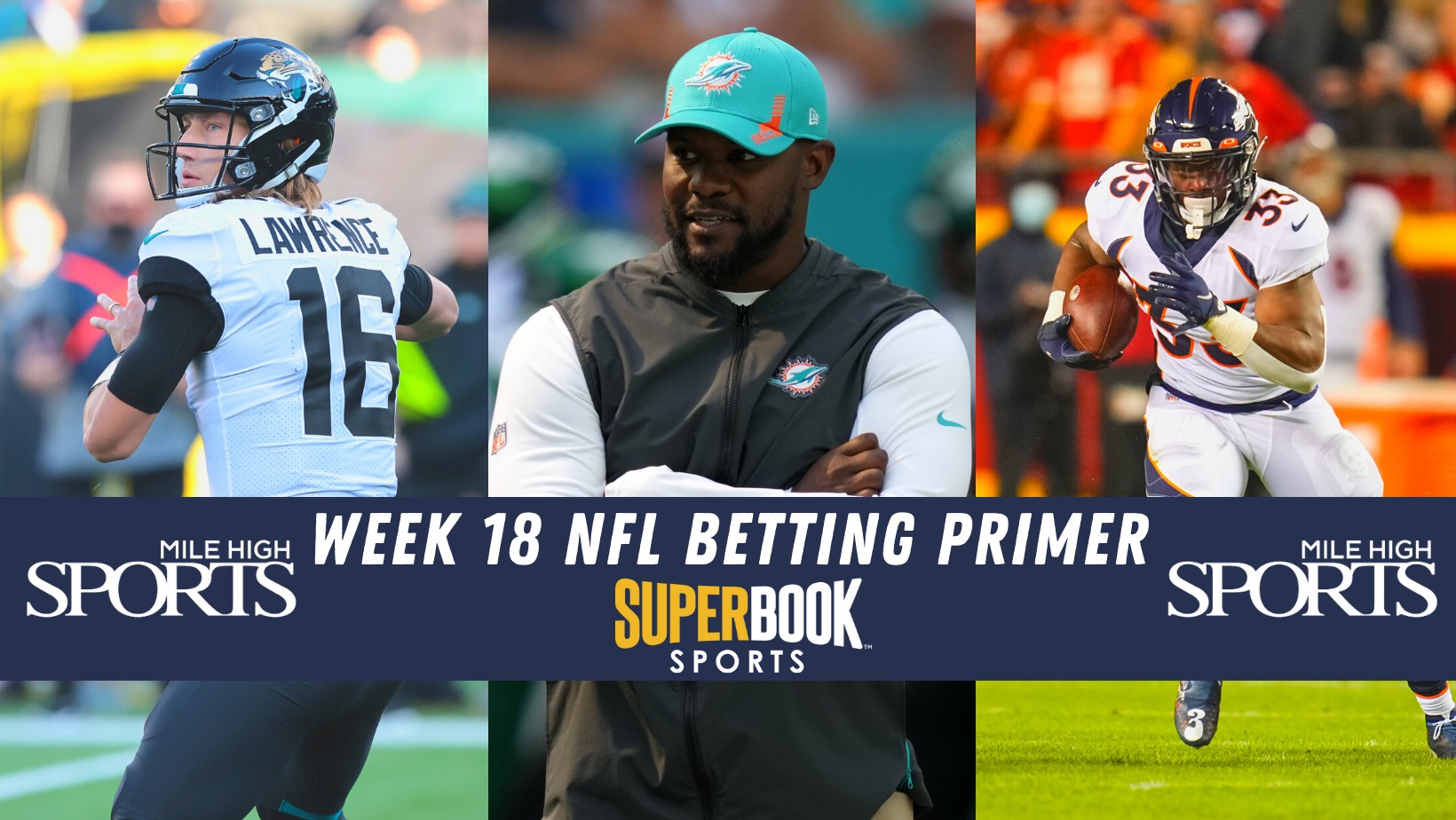 It’s that time of the week once again! Week 18 of the NFL season is here, which means it’s time to run the board with an NFL betting primer presented by SuperBook Sports! So if you are looking for a new sportsbook to bet with in Colorado, look no further than our friends at SuperBook Sports!

WATCH LIVE: Football Friday with @MediabyAP is LIVE discussing all the latest news and matchups for Week 18! Presented by @Superbookco https://t.co/CJPidTTcNg

SuperBook will match your first deposit dollar-for-dollar up to $500! So what are you waiting for? Get signed up with SuperBook, use this primer to your advantage, and let’s make some money this week!

The final week of the NFL season is a doozy. Typically, lines for teams needing a win are inflated, making getting a read on the slate a bit difficult. Nevertheless, here’s a look at the scenarios for each team still in the hunt.

Without further ado… let’s take a look at the Week 18 NFL slate. All odds are courtesy of SuperBook Sports.

Not really sure what to make of this one with the Bengals having won the division and the Browns being eliminated from the playoffs. I’ll pass this game.

This seems like too many points, even for a Colts team with a win-and-in scenario. The hook is critical here, and this feels like one of the more inflated lines of the week. The Colts should absolutely win this game, but the Colts are 0-6 ATS in their last 6 games in Jacksonville and 1-11-1 ATS versus the Jags in their last 13 h2h matchups. Historically, this has been a tough matchup for the Colts, and I have concerns about them covering this spread. They have to WIN to clinch, not win by two touchdowns. I’m inclined to play the trends here and take a chance on the Jags in their last game of this trainwreck of a season. Bettor discretion is advised.

My rule of thumb with the Titans: bet them as a dog and fade them as a favorite. Much like the Colts, they need to WIN this game but not dominate, which is why I balk at the big spread. Mix in the inflation from the book, and I think there’s some value on the home dog here. The Texans already beat the Titans once this season and beat the Chargers a couple of weeks ago. The Titans are just 1-6 ATS in their last 7 meetings in Houston, and the Titans are just 6-14-1 ATS in their last 21 h2h meetings with the Texans. Additionally, the home team is 8-3 ATS in their last 11 matchups. I can only look towards the Texans here.

The end of the road for both of these teams. Next year the WFT will have a new name, and the Giants could have a new head coach. With Daniel Jones out for this one, it means it will be Mike Glennon once again for big blue. I’m not touching the Giants down the stretch here as they have been one of the worst teams in the league. While the points are tempting, I’ll look towards the WFT, especially in a teaser where you can get them down to -1. They are the better team in this matchup, even though they have covered just one time in their last 6 meetings with New York.

No thoughts for me on this one. The Panthers confuse me, and with Brady playing, I just get weird vibes from this game. Part of me wants to tease the Bucs down, but I’m not sure how this game will play out. Does Tampa get up big and rest their players? Run the ball? There are so many question marks for me with this one that I think the best thing to do is pass it.

One of the best games on the slate between two AFC East teams. The two teams clashed in Week 1, and the Dolphins escaped with a 17-16 win. After this game, the two teams went in opposite directions and eventually found their footing in the middle of the season. The Dolphins are one of six teams coach Bill Belichick has a losing record against in his coaching career, and the Dolphins are seeking their third consecutive victory over the Pats.

The home team is 14-4 ATS in their last 19 h2h meeting, and New England is just 2-7 ATS in their last nine games in Miami. Both of these teams will play tough defense, and I expect this to be a low-scoring game. I’ll lean towards the Dolphins ATS for this one as I can see it being a field-goal type game, although teasing the Pats down here might be a smart play. Can Miami play spoiler?

The Saints will be down a few key players in Terron Armstead, P.J. Williams, and Bradley Roby. Additionally, Mark Ingram and Marcus Davenport are both listed as questionable. I have my doubts about the Saints here, and the hook scares me, but I’ll lean with New Orleans here. They have plenty of experience playing and winning in Atlanta, and I think Sean Payton will have his guys ready to play. More of a lean, but I would look towards the Saints and consider buying them down to -2.5.

This number is so inflated that I just might have to consider the Jets. A win and the Bills win the AFC East, so expect their best effort, but 16.5 is a funky number. I have no real thoughts for this one… the public is actually on the Jets here with this massive number after they played Tampa tough last week. Can they finish the season with another strong showing? The road team is 5-2 ATS in the last 7 meetings, and the underdog is 9-4 ATS in their last 13 h2h contests. Bless your heart if you want to take the Jets, but I’ll be passing this game.

This is the game of the week for me. Both teams have a lot on the line, and the result of this game will have a lot to do with the final NFC playoff picture.

Sean McVay has not beat Kyle Shanahan since 2019, and the 49ers are 4-1 ATS in their last 5 games played in LA and 4-1 ATS in their previous five h2h matchups versus the Rams. Furthermore, the underdog is a perfect 5-0 ATS the last 5 times these two have clashed.

Both of these teams have been hot. The Rams have won five games in a row, covering four of the five matchups. In their last eight games, the 49ers are 6-2 SU and ATS and are a win away from clinching the playoffs.

Jimmy G is not expected to play in this game, meaning the weight of the world will be on rookie Trey Lances’ shoulders. Lance started last week against the Houston Texans and settled into the second half of that game. This is a tall task for the rookie, going up against Aaron Donald and Von Miller, but I think Shanahan will have his prized draft pick ready to go. Deebo Samuel and Brandon Aiyuk will both be prepared to go, as will George Kittle. I lean towards the 49ers here as they are catching over a field goal. I think the Rams are the hotter team now, but Shanahan is McVays’ kryptonite. The Rams should win the game, but I think this tight matchup finishes within a field goal, so I’ll look towards San Fran here.

The last go-around for Russell Wilson in a Seahawks uniform? Unfortunately, it comes against a Cardinals team playing for a chance at the division crown. The underdog is 10-2-1 ATS in their last 13 meetings, and the road team is 10-3-1 ATS in their last 14 meetings. I just don’t know what to make of the Seahawks right now. They dismantled the Lions last week but lost a heartbreaker to the Bears the week before. Russ seems like the type of guy that wants to go out on a positive note, and I can see him playing spoiler for the Cardinals this weekend.

The Cardinals could be prone to a letdown spot after a stellar showing last week against the Cowboys. However, I think this line is pretty juiced up from the books, knowing how bad the Cardinals need this win. We saw AZ struggle not too long ago, and they’ve played much better on the road than at home. I’m split on this one but am leaning towards taking the points for this game. AZ has failed to cover in their last 4 home games, and the Cards are just 1-5 ATS in their last 6 games as a favorite.

Will the Chargers choke? The Raiders were on the outside looking in for a playoff spot for quite some time and now have a chance to make the big dance, which is remarkable when considering the adversity they faced throughout the season. The Chargers beat the Raiders back on Oct. 4, 28-14, and the Chargers were a three-point favorite in that game. I wonder what the home-field advantage will be like in Vegas… Chargers fans don’t travel well, and I’m sure Raider Nation will be alive and well as they play their first massive game in their new stadium.

The Chargers are recently removed from an awful loss to the Houston Texans, which left the door open for the Raiders to be in this position. After getting right against the Broncos last week, will the Chargers be locked in for the Raiders? The key to this game will be Austin Ekeler. When Ekeler rushes for 50+ yards, the Chargers are 9-3 this season, so the Raiders’ defense will need to be dialed in from the jump.

The Chargers got out to a big lead when these two played back in October, but two touchdowns from Derek Carr made the game enjoyable late. The Chargers are known for the letdown in this exact situation, and can’t help but feel the public’s love for Justin Herbert is what’s making them the road favorite. Homefield advantage is worth about 1.5 points this season, and I’d say the Raiders have one of the stronger home-field advantages in the sport. I think the Chargers have the higher ceiling, but the adversity the Raiders faced this season is no consolation. I think this will be a slow game that a field goal could decide. Knowing the Chargers’ history in these spots, I’ll lean towards the points with the Raiders… can Herbert end the curse? The underdog is 18-7 ATS in their last 25 h2h meetings.

They lost Nathan MacKinnon and their composure but not their belief. Avalanche complete emotional 4-3 comeback victory over the Boston Bruins

5 prospects the Denver Broncos could target with the No. 9 pick in the 2022 NFL Draft