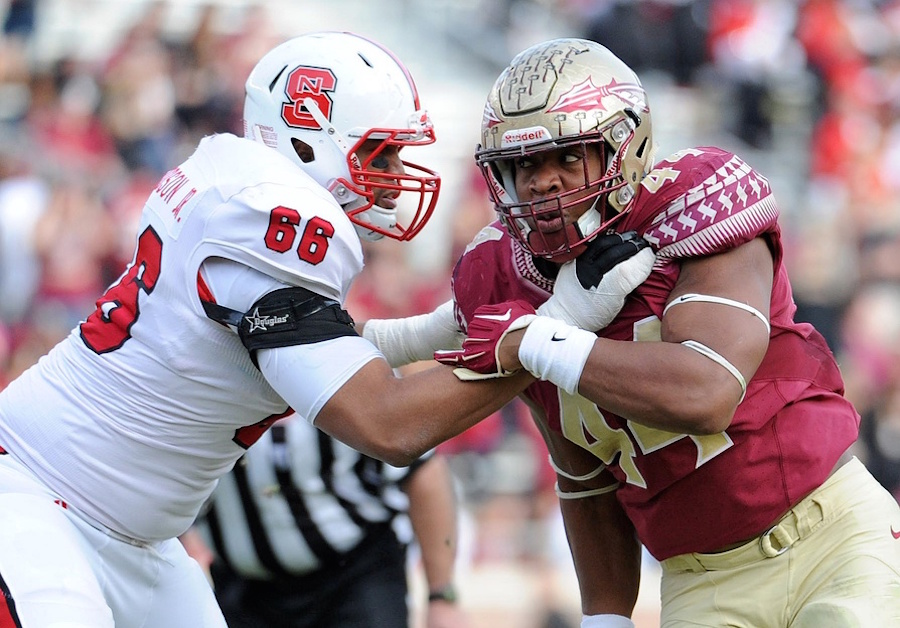 One is just coming into the league. The other hasn’t played a snap since the confetti fell on Super Bowl 50 in Santa Clara. The first will be charged with punishing quarterbacks for years to come. The second had an All-Pro career protecting them. They may sound like on-field opposites, but 2017 second-round draft pick DeMarcus Walker and former Denver Broncos offensive lineman Louis Vasquez have one big thing in common: The drive to break their opposition’s will.

In August 2015, as the Denver Broncos were wrapping up training camp on what would eventually be a Super-Bowl-winning season, veteran guard Louis Vasquez uttered a quote that would summarize Denver’s attitude on the offensive and defensive lines en route to the team’s third world title.

“My mentality is by the end of the fourth quarter, we want to feel your soul wilt in our hands,” Vasquez said. “So I’m trying to instill that in the offensive line because it’s dirty work. You might as well get nasty with it.”

Walker, selected No. 51 overall out of Florida State, brings that same mentality, as he told the collected Denver media on Saturday in his first press conference as a member of the Broncos.

“I just love dominating,” Walker said. “That’s one thing that I love to do is to dominate. Just taking the will out of a man in this game football.”

John Elway entered the 2017 draft needing to add more “will breakers” to both sides of his line. In 2016, Denver ranked 28th in the league in rush yards allowed. They were 27th in rushing yards gained and 24th in sack percentage. The loss of Malik Jackson on the defensive line and the loss of Vasquez and Evan Mathis on the offensive line not only drained valuable experience from the Denver roster between 2015 and 2016, it sapped some of that edge the Broncos now hope to regain with the additions of Walker and first-round pick Garett Bolles, an offensive tackle out of Utah.

Walker credits his edge to his upbringing.

“That’s just something that came natural, especially with my tough love that my parents showed me,” Walker said Saturday.

The 22-year-old from Jacksonville, Fla. even had a tough time getting on the football field as a kid. He didn’t begin playing football until the age of 15, when his high school football coach, Adam Geis, convinced Walker’s father to let him take up the game. Dad wanted his son to go into medicine.

Walker would have made for an imposing figure in scrubs at 6-foot-4, 280 pounds. But despite his on-field aggressiveness, he’s known off-field for his kindness.

“Everybody loves DeMarcus,” Geis told Jacksonville.com in September 2016. “He’d hang out with video gamers and band people as much as his teammates. I’d get knocks on my door from a little kid with a trumpet in his hand, looking for DeMarcus.”

He plays with a mean streak that can be unstoppable at times, as was the case in the second half of the Seminoles’ 2016 season opener against Ole Miss. Walker logged 4.5 sacks on Chad Kelly (his new teammate, coincidentally) in a 45-34 Florida State victory. But that performance was borne from a desire to prove his worth, as much as it was a natural tenacity.

“Going into halftime,” Walker told the Denver media about the game, “I just saw the disappointment on [Florida State defensive ends / outside linebackers] coach [Brad] Lawing’s face. He knew what I was able to do and I just turned it on.”

Walker is already motivtated to prove his worth at the NFL level.

“8 rushers got picked before me, PLEASE remember this!!” Walker tweeted the morning after the first round of this year’s NFL draft, when he was still waiting for his name to be called.

Sports Illustrated ranked Walker the No. 15 edge rusher in this year’s draft class. Fox Sports had him No. 13 in their rankings. He was No. 1 on John Elway‘s list.

“DeMarcus was the top guy on our board that fell to us,” Elway said on Friday after selecting the consensus All-American. “We’re thrilled how that fell. You never know how it’s going to fall. We can never have enough of those pass rushers and he can do it inside and he can do it outside. We’re excited about him.”

The Broncos are excited about his productivity – 180 tackles, 28.5 sacks, three forced fumbles and an interception over four years at FSU. But they’re also excited that he can fill the void left by Jackson.

“You look at our defense and where our defense was two years ago,” Elway said Friday night, “and [Coach Vance Joseph] and I were talking about this, how effective we were when we had Malik inside and rushing inside. DeMarcus has that ability and will have that ability. That’s why we’re so excited about him.”

Much of Jackson’s rise to dominance in the 2015 season can be credited to Vasquez, who regularly lined up against him in practice. That desire to wilt his opponent’s soul made Vasquez an ideal tutor for Jackson, who exploded during the Super Bowl season for 45 tackles, five sacks and seven passes defended. It also earned Jackson an $85.5-million contract with the Jaguars ($42 million guaranteed).

Vasquez is gone, but Denver has added an excellent right guard in the offseason in Ronald Leary who should help speed Walker’s development. Like Walker, Leary has a positive attitude off the field, but a mean streak on it.

“With Ron, we like the way that he plays the game. He’s a physical guy that plays with an attitude,” Elway said in March. Adding, that Leary (along with new right tackle Menelik Watson), will “add a real positive feel in the locker room.”

Both sides of Denver’s lines will have a different feel in 2017. With the addition of Walker and Bolles in the draft, and the free agent signings of Leary and Watson on offense and Domata Peko and Zach Kerr on defense, the Broncos’ lines should look and play more like that Super-Bowl-winning team of 2015 than they did last year.