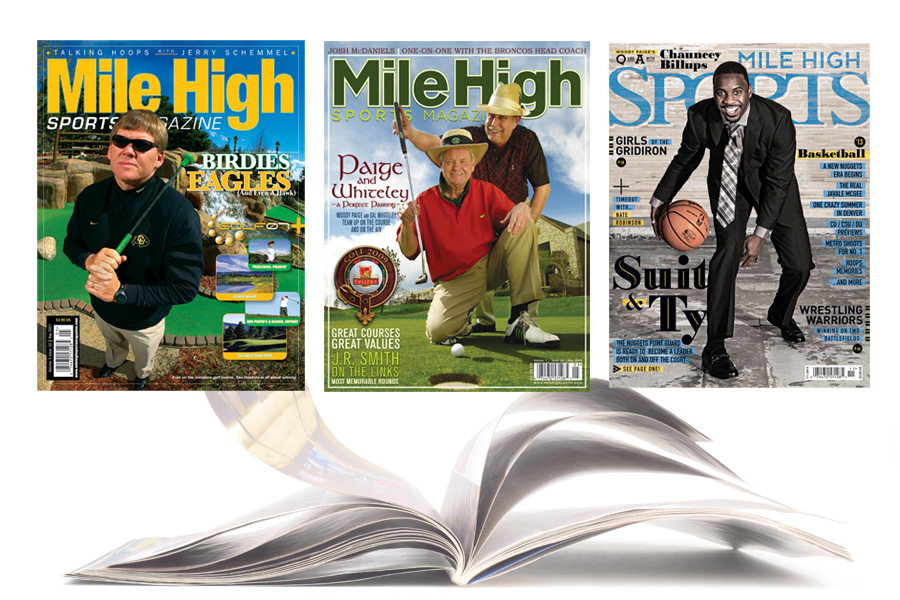 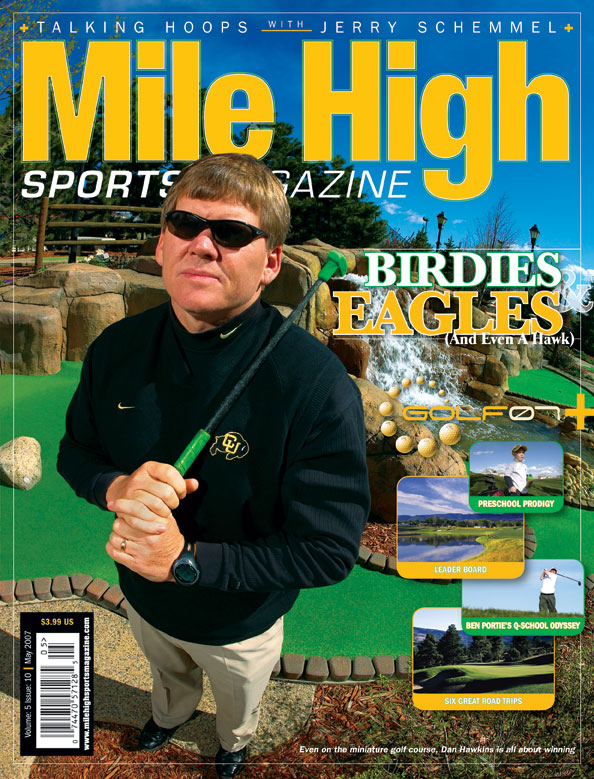 But, the road to 19-39 (Hawkins’ record with the Buffs) is paved with good intentions. For one reason or another, golf dates kept getting moved back, rained out, something. To be fair, in Division I football, brotha, a coach is probably a pretty busy person. The problem with agreeing to play, and not quite getting around to it, however, is that ever-looming print deadline. At some point, we had to get something done, as the issue and its covered centered around playing a little golf with Hawkins.

As such, I called Dave Plati, the legendary (and still current) sports information director at CU, to explain our dilemma. “I just need to play a few holes. Doesn’t even have to be a full 18,” I explained.

Plati went to bat for us, but even he wasn’t having much luck.

“Hawk is really busy. He basically said he doesn’t have time to go play golf. He’s wondering if you can just do the interview and that’s it,” Plati responded.

Problem(s): 1) It’s the golf issue, so golf is ideal. 2) The cover had been reserved for Hawkins the entire time, since we truly believed he was going to play. 3) With our print deadline looming, we didn’t have time to reinvent the wheel.

We had to have Hawkins, on a golf course.

“How about we meet up and play putt-putt?” I countered. “Take a quick photo… play the entire round in less than 30 minutes. We’ll find the closest one to campus.”

Plati agreed and made the arrangements. Within a day, we were dragging lights and tripods – and Dan Hawkins – onto a miniature golf course in Boulder. As promised, we took the cover photos first (and quickly). Then, it was time to play.

“Let’s not,” he said (or something along those lines). “I really do have to get back, so can we just do the interview?”

But what about the golf? That was the whole premise, you know, get to know Dan Hawkins over a round of golf, mini or other…

So, that’s what I did. Aside from a few quotes pertaining to coaching and CU and whatever else we ultimately discussed, the entire rest of the feature is essentially fiction. In the end, I believe I had Hawkins beating me in a close, and probably intense, round of putt-putt golf. Sometimes an editor has to improvise. 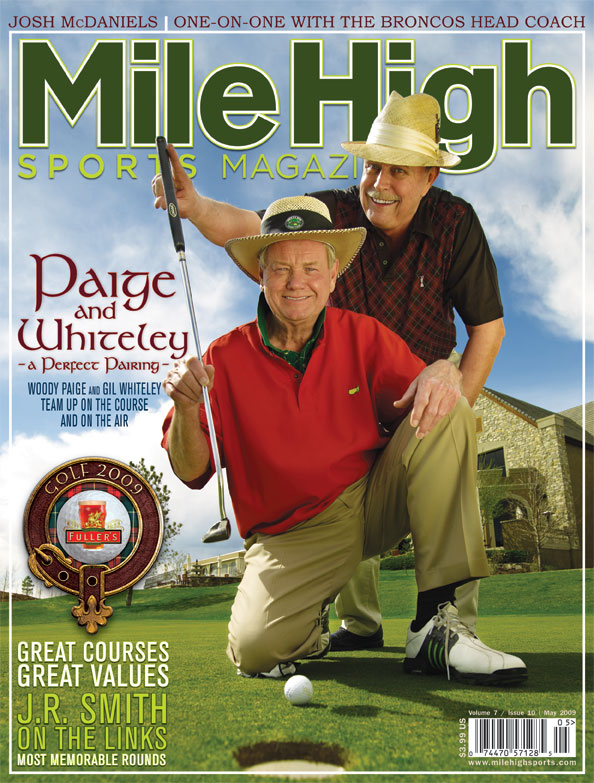 There have been countless rounds of golf played between legendary Denver media members Woody Paige and Gil Whiteley – many of them played together. Over the years, I’ve heard tales of big bets, bigger putts and big tantrums thrown by big names (that we won’t mention here – what happens on the golf course stays on the golf course, or at least, out of print).

I’ve also been fortunate enough to play golf with both Gil and Woody. I’ve been unfortunate enough to be beaten – badly – by both of them. But more fortunate than my time on the golf course with them, has been the opportunity to work with each of them. Gil has been a radio host with Mile High Sports Radio since its inaugural year (2007) and is currently the longest tenured host on the station. Woody co-hosted with Gil for a year or two, but also authored “The Mile High Interview” and “The Back Paige” inside Mile High Sports Magazine. Both have taught yours truly a ton about the sports journalism business.

Needless to say, from a personal standpoint, this is one of my favorite covers. It was great to capture these two legends of Denver sports in their element – on the golf course. 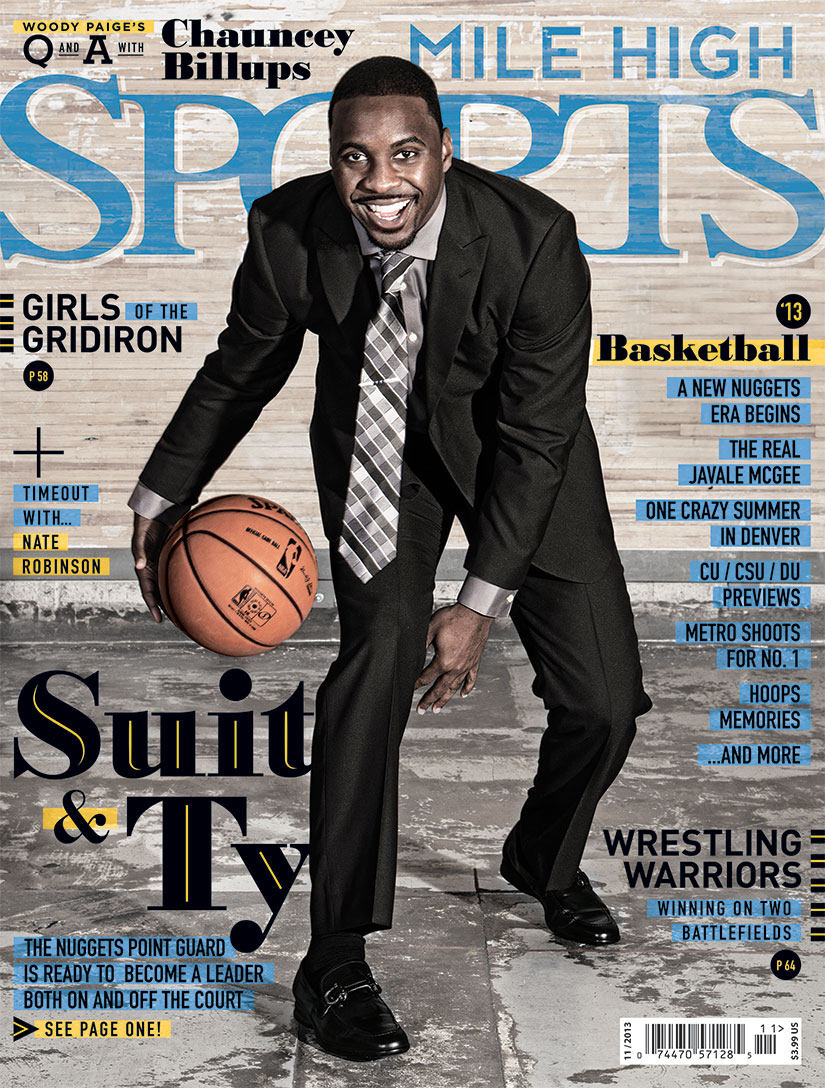 Ty Lawson is (was?) a strange case. Such a promising career. Such a talent. And really, a pretty darn nice guy any time we had the opportunity to work with him. But something definitely went awry with Ty.

The ironic thing about this cover, which turned out very well, is that it was photographed at Punch Bowl Social on Broadway. A few months later, Punch Bowl hosted some sort of “meet the Nuggets” charity party, and afterwards, Lawson was arrested on suspicion of DUI. It was Lawson’s third such incident. Two seasons later, Lawson was no longer a Nugget. He bounced around Houston, Indiana and Sacramento for two seasons and is no longer in the NBA.