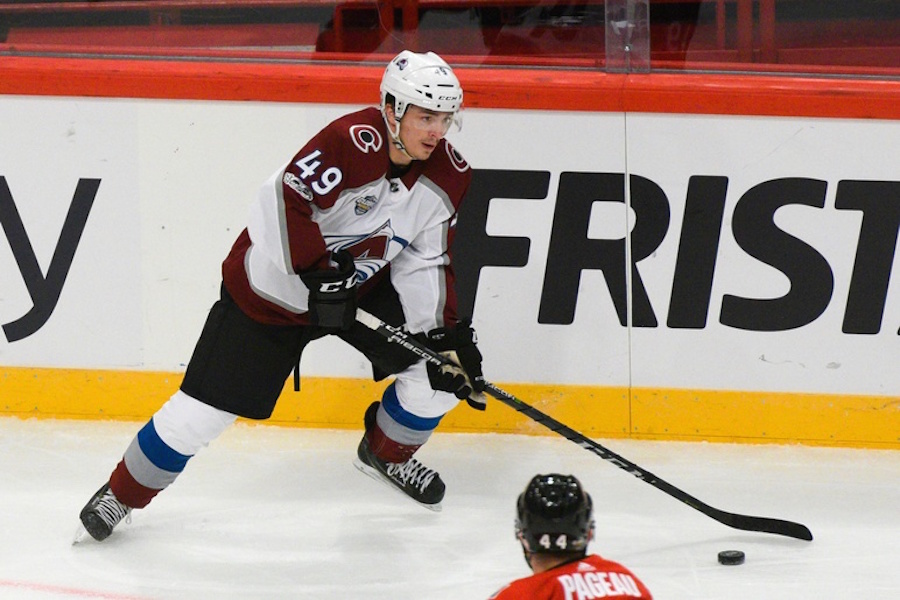 Joe Sakic was watching the Avalanche’s practice from above the bleachers Wednesday afternoon when I joked with him about now having children on his team.

“They’re as young as my kids,” Sakic said with a smile.

Yes, when Sakic emphasized down the stretch of the Avalanche’s horrific 2016-17 season that the younger and faster makeover was just getting started, he wasn’t kidding.

The question now is whether the NHL’s second-youngest team will be able to remain competitive the rest of the season — the Avalanche is 8-7-1 after getting only one point in two games in Stockholm  against the Senators — or the reboot still inevitably will include periods of prolonged struggle. And pleas for patience.

In the wake of the mega-buster deal that dispatched Matt Duchene to Ottawa last week, the Avalanche’s practice and the Family Sports Center dressing room had a new — and even younger — look Wednesday.

With the Avalanche dividing time on the two rinks, the two young players acquired from Nashville in the three-team deal — defenseman Samuel Girard, 19, who played in both games at Stockholm against Ottawa; and left wing Vladislav Kamenev, 21, who was called up from San Antonio on Tuesday — were becoming accustomed to new surroundings.

Girard was assigned Duchene’s old stall in the dressing room, and Kamenev was being introduced to teammates after his callup, though the communication was limited — mostly with his fellow Russians — because he doesn’t speak English.

Winger Nail Yakupov acted as an interpreter in Kamenev’s brief session with reporters.

“The trade’s better for him,” Yakupov said, passing along Kamenev’s comments. “It’s a good opportunity for him to be here with the young guys and he’s looking forward to being here.”

Nashville’s No. 2 draft choice in 2014, Kamenev spent most of the past two seasons with Milwaukee of the AHL, collecting 36 goals and 88 points in 127 games. He was with the Admirals at the time of the trade and then played four games for San Antonio before his callup, and his 14-game totals in the AHL this season are three goals and 12 points. When Kamenev suits up against Washington Thursday, it will be his third NHL game.

So now two of the seven “chips” the Avalanche collected in the Duchene trade will be on display at the Pepsi Center Thursday. Colorado also got three draft choices — a first and a third from Ottawa and a second from Nashville — and journeyman goalie Andrew Hammond, plus the rights to Boston University center Shane Bowers from the Senators.

The first issue with Girard is whether he will be with the Avalanche after Saturday’s game at — ah, the twists continue — at Nashville. He will have played nine NHL games this season, and the 10th will cause his three-year entry level contract to kick in. The option is to return him to Shawinigan of the Quebec Major Junior Hockey League for another year of seasoning and avoid burning a year on his deal. In 132 games over three seasons with the Cataractes, Girard had 192 points.

At this point, it would be surprising if the Avalanche doesn’t keep him on the NHL roster. For a 5-10, 162-pound defenseman, the lessons could be painful, but the Avalanche for a lot of reasons is committed to displaying what it hopes are the franchise’s future cornerstones. Tyson Jost, who signed last spring after his freshman season, arguably could have benefited from a second season at North Dakota. He’s injured now, but he hasn’t been over his head, either, when in the lineup. It’s all part of getting the rebuilding in motion — and on display.

“I never think about going back to junior,” Girard told me after practice. “My goal is to stay here, to stay all season, to play here. I’d love to have the opportunity to have my first NHL years here. I’m going to try my best to stay here. Whatever the direction they will take, if they think it’s more important for me to go back to junior, I’ll do it. But I really think I’m ready to make that jump to the NHL.”

In describing Girard’s play and strengths, Avalanche coach Jared Bednar again left the impression that the young defenseman has played his final game in major junior.

“He’s impressive in a lot of ways,” Bednar said. “He brings us what we need, another guy to help drive us offensively and move the puck in and out of our zone. . . He’s a tenacious little guy. When you kind of put the whole package together, he doesn’t look to me like he’s overwhelmed out there at all. It looks like he’s a real confident guy. You can tell because he’s not scared to handle the puck, to make plays in pressure or when he’s got open ice. You kind of watch him play and say, yeah, he belongs.”

That said, I asked if there was any chance Girard could be sent back to Shawinigan for a fourth season.

“It’s not my decision,” Bednar said. “There’s a little bit of time left on the clock, but based on what we’re seeing, I don’t see that being an option.”

For his part, Girard welcomed the trade. He got the word when he was in Los Angeles with the Predators, and he immediately traveled to Stockholm.

“I woke up from my nap and I saw three calls and three texts from my agent,” Girard said. “He said I was traded to Denver, so I was pretty happy.”

He traveled from Los Angeles to London first before going on to Stockholm.

“It was a good thing for me to meet the team in Sweden,” he said. “I got to go to the team dinner there, so I met all the team, the staff, the organization there. To be here is fun. I think it’s great for me. Nashville had a lot of good defensemen, and I think it’s good for me to come here and have more ice time. When you’re a hockey player, you want to play, you want to be on the ice and you want to help your team win. So I’m very happy to join this team and I will try to do my best here.”

The plan is to give Girard a look in the top pairing with Erik Johnson Thursday against Alex Ovechkin and the Capitals. “He’s playing good defensively and offensively,” Girard said of Johnson. “It will be great for me to play with him. He’s getting a lot of ice time and I think he’s going to help me pretty well.”

Girard even played in a pairing with the similarly sized Tyson Barrie at Stockholm.

“He’s a good defenseman and we kind of are the same defenseman,” Girard said. “We can bring offense, we have the good first pass and good sticks. We’re not the biggest defensemen, but we can bring some good offense while playing good defensively as well. We read each other pretty well.”